With a slow, sinister build-up and sincerely spooky psychological scares, “Pisces” #2 sees the writer of “Rat Queens” dive back into horror with a promising American Gothic twist. 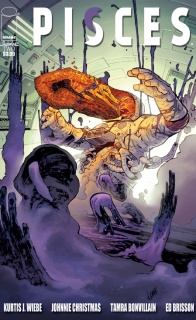 With the Vietnam War a few years gone, Dillon finds difficulty adjusting to civilian life. His hope dwindles while living with an abusive father and working a night shift at a local office, but the creeping dread rises when the dark begins to speak in the voice of friend long dead.

From campside ghost stories to multi-film franchises, horror is big business. But, given the glut of media gore that focuses on remakes, reboots, and reimaginings of classic tales, finding a series that offers a truly original scare can often seem harder now than it ever was. But, just two issues in, it seems that “Pisces” is offering a seriously unique and engaging story. And, what’s more, it’s seriously scary!

Issue #1 sets the bar impressively high, with a plot jumps in two feet first, twisting and turning through time, jumping protagonist Dillon Carpenter back and forth from a drunken brawl at a hospital, to a blood-soaked Vietnam flashback, to a mind-bending, and completely unexplained, jaunt into space. Wiebe manages to tie these seemingly disparate threads together with a confidence that means you never question that there’s a larger plan in mind. While the complete and total lack of exposition (or any real explanation, for that matter) does leave you feeling more than a little disorientated, the right itself is a compelling one. What’s more, Christmas’ final panel, a full page spread of Dillon freefalling (or freefloating) in space, accompanied by a single word after three pages of silence, is sublime – heavenly and terrifying in equal measure and totally enthralling. Once I’d finished the first issue I was beyond eager to get a better understanding of the weird world that Dillon finds himself in.

But the second issue of “Pisces”, while perhaps even more intriguing than its predecessor, is definitely another twenty-something pages of questions, not answers.

Opening with a brilliantly stilted dialogue between Dillon and his father, an ageing Korea vet, Wiebe swings his focus onto the complicated relationships that different generations have with war. The duo start out ribbing each other over the results of a football match but, as tempers flare, old conversations are revisited and wounds reopened in a way that grounds their relationship without having to telegraph anything. Wiebe’s characterisation is earthy and believable, offering a subtle commentary on both the civilian response to the first televised war, and the ex-military reaction.

Christmas’ understated, grainy realism in these first few pages compliments the convoluted family dynamic perfectly. His balanced, steady panels focus on facial tics and reserved body language that mirrors the surface-level calm of Wiebe’s conversation. But, as the ripples start to show, Christmas’ visual calm reacts accordingly, shattering in response to Dillon’s physical outburst and shattering with a jarring display of white space. Tamra Bonvillain’s colours need a specific shout-out in this section. While Dillon and his dad bond over a football game on the TV they’re bathed in artificial light and, as the tension of the scene ramps up, the glow from the screen provides an eerie and disconcerting shading that really adds to the familial fear of the scene. It’s those kinds of subtle, easy to overlook additions that really add a level of weight to a comic-book’s art style, and “Pisces” is littered with little professional elements just like it.

This scene is weighted against a similar one at the back end of the book between Dillon and fellow Vietnam survivor Patrick Keene. The two vets meet on a beach in Miami and swap stories in a much healthier exchange than the one that precedes it. Through Patrick, Wiebe is able to explore the idea of PTSD and dream interpretation, two major themes that clearly form the cornerstones of “Pisces”. As Patrick recalls his own experiences on the ground Wiebe strikes a great balance between oneiric storytelling and war diary-style reminiscence. Christmas’ execution of Patrick’s recurring nightmares is all foreground imagery, drawing into sharp focus the main points of Patrick’s story while keeping the undergrowth and all extraneous features an indistinct blur. Patrick is convinced that, out in ‘Nam, the jungle itself wanted the Western invaders dead and Christmas’ frantic, threatening artwork, full of claustrophobia inducing close-quarters insert panels, definitely lends credence to that theory.

But Dillon’s dreams, when we see them, are far less focussed than his newfound friend’s. They appear throughout this issue in fits and starts, a dark, opalescent sludge that pours in from the corners of the panels and threatens to drown our protagonist. Wiebe and Christmas’ true achievement is managing to keep the actual occurrences of extra-normality relatively low, while constructing a world in which they feel ever-present. The true horror of their “Pisces” isn’t embodied in any monster that we see during issue #2, but rather in the clawing, subconscious nature of Dillon’s own fears. Whether memories, visions, or just trauma-induced panic attacks, they haunt the pages of this book with more menace than any monologuing villain could muster.

These breaks from reality are where Christmas and Bonvillain truly shine, exploding pages in decompressed panel-splatter that forces the reader to focus on often rather disturbing images in what feels like slow-mo, as well as highlighting the moments with use of vibrant colours that depart from the real-world palette throughout the rest of the book.

While it’s in no rush to begin a driving narrative, both issues of “Pisces” so far have felt like they have a driving internal force that makes for pretty unputdownable reading. Issue #2 feels like it’s beginning to point us in the direction of a story but there’s still so much more to explore that it feels as though we’ve barely scratched the surface. However, if any book feels like it’s going to pay off the patience it requires from its reader it’s this one and, if the glorious and grotesque imagery is anything to go by, Wiebe and Christmas are promising that the journey will be a beautiful one.

Final Verdict: 8.4 – Tense and tantalising from start to finish. “Pisces” is shaping up to be one of the best head-scratching spookers in recent memory.