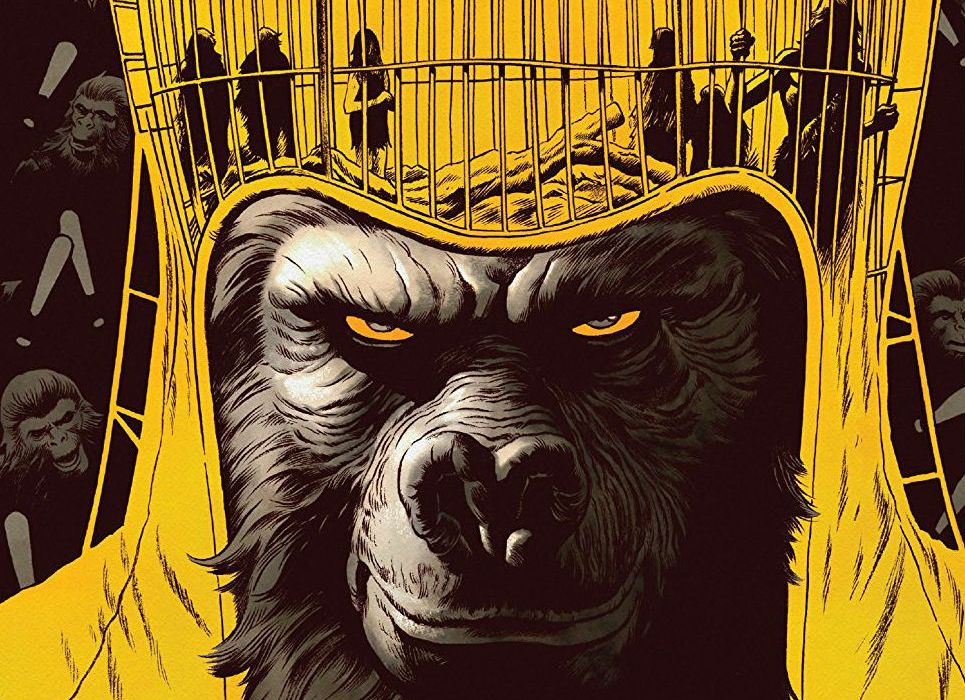 Kicking off the franchise’s 50th Anniversary, Boom! Studios is launching a “Planet of the Apes” mini-series with a focus on an ape that would become a tyrant, General Ursus. How does this first issue set the tone? Let’s dig in. 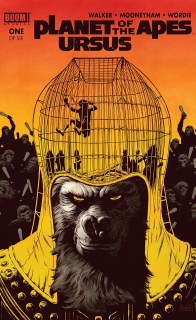 David F. Walker (Luke Cage) returns to the Planet of the Apes with artist Christopher Mooneyham (Five Ghosts) for a limited series about the franchise’s most notorious villain! General Ursus has always hated and feared mankind. Get a glimpse at his rise through the ranks to General and what experiences brought him to the Forbidden Zone.

Planet of the Apes is an odd duck for me. It’s one of those sci-fi franchises that has always been in the peripheral, never one I held in highest esteem, but when it comes around, I will take a good gander. So my eyebrow did cock with the release of a new mini-series focusing on General Ursus. On top of that, it is brought to us from the writing of David Walker (“Luke Cage,” “Noble”), someone whose work I usually like. So, with all that in mind, does this opening chapter provide a compelling tale?

I’ll say this: “Planet of the Apes: Ursus” #1 is a lot more quiet than I expected. Oh sure, you have some action, some of it very impactful too when we get into discussing the artwork. But this issue is very cerebral, more about the internal than the external as we get inside Ursus’s head. Sure we see his thoughts on The Hunt of humans and how it once brought joy and pride to him but now he felt it beneath him. Another example of looking deeper into the character of Ursus is when we observe him waking up and seeing his daily routine, while we are treated to an internal monologue on why he chooses to live alone, despite his status entitling him to a staff. We look at the wear and tear and loss Ursus has gone through, whether learning he can’t bring himself to sleep on the other side of his bed as well as the pictures of his dead wife, Qama. To put it simply: he chooses to live alone so he can simply be Ursus. It goes a long way to . . .  hmmm . . . humanize our protagonist.

Walker, Moonneyham, and Wordie also do a good job of populating and building the world of “Planet of the Apes” without it ever feeling like an exposition dump. They establish the politics of this world, the Simian High Council, governmental ministries, and a whole variety of characters and functions and needs of this society and how Ursus understands yet finds it grating at the same time.

A subplot introduced is where one of the human astronauts found is a dark-skinned human, something that serves as a way to delve into a new part of Ursus’s past as well as some commentary on the franchise. The original Planet of the Apes was of its 1960s time and had no black extras as humans in it. We are given a flashback to Ursus as a young gorilla and his encounter with another dark-skinned human. It really does delve into some unnerving look at how black people can be seen as “entertainment” once you dive into the subtext while simultaneously seeing Ursus be imprinted with these prejudices at a young age.

On the art side, this was very enjoyable. Fitting with the more toned-down, talkative, and contemplative scenarios Walker went for in the script, Mooneyham sets a very deliberate pace, knowing exactly which shot emphasizes the most drama. Going back to the scene in Ursus’s home, there is a close-up panel of Ursus kissing his finger and, in the next panel, placing the same finger on the picture of his wife. Another being the shadowed face of barely-contained rage at when the Council makes a decision he disagrees with, the bits of expression we do see selling the frustration at the flaws Ursus percieves in society.

Wordie’s coloring also does a real good job. He changes his techniques between the present day scenes and in the past. In the present, the coloring is a lot more full and bold. In the past though, the colors take on a lighter emphasis while also having a deeper texture, creating an interesting effect to try and simulate someone reminiscing on an event. Speaking of colored, I also have to give a credit to letterer Ed Dukeshire, who changed the color of the word balloons in the flashbacks to fit a bit more with this color style.

Paolo ad Joe Rivera do the cover and what else can be said about their work? It’s a great cover, wonderfully depicting Ursus’s coming malice while also using the caged humans as a visual representation of their standing in this world as well as a metaphor for what Ursus thinks of humans, since the cage takes the place of his helmet. More covers like this, please.

“Planet of the Apes: Ursus” #1 is a great opening to this mini-series. It did it by not only taking a nice big dive into Ursus’s personality and history, but using that to also explore the same social commentary as the original film. Furthermore, the creative team does a really good job of introducing someone not completely knowledgeable of the franchise into its world without being overbearing.

Final Verdict: 8.6- A very good start to a character study of Apes’s most prominent villain.