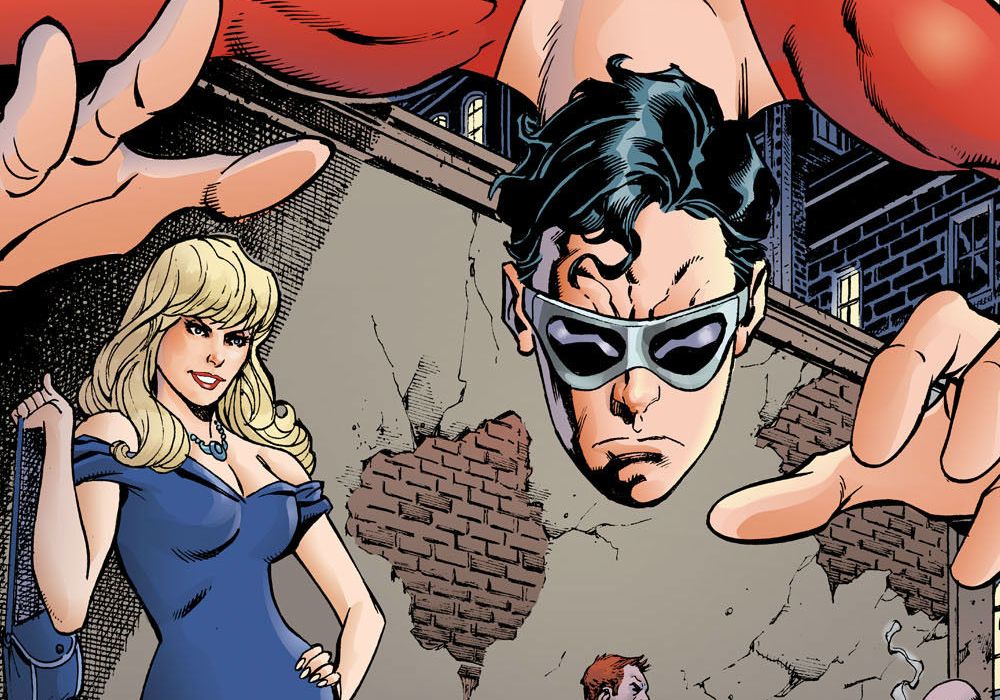 With a raised profile and more attention than ever, DC is incredibly wise to launch a new Plastic Man series! Due to his recent focus as part of DC’s “The Terrifics,” Eel O’Brian is begging for the spotlight! Curiously, DC has assembled the popular creative team of writer Gail Simone and artist Adriana Melo to work on the title. This brand new mini-series is O’Brian’s big moment in the sun, will he shine in the spotlight or get lost in the crowded pack of titles on store shelves? 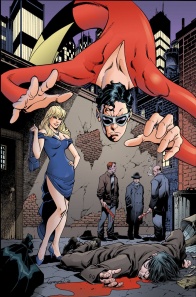 Meet Eel O’Brian: a petty thug, thief and con artist who runs a strip club. Hey, he’s also dead, at least according to the gang that tossed him out like last week’s garbage. Literally. Don’t worry, though—he bounced back from all that, and now he’s trying to make a new life for himself, but the effort is stretching him pretty thin. How can he get revenge on his old boss, keep a street kid out of trouble, make a dancer fall in love with him and stop a mysterious society from taking over the world? Eel has no idea!

Eel O’Brian is a charismatic and endearing leading hero who is certainly worthy of his own series. The difficulty in regards to his character lies in coming up with a scenario or idea for O’Brian and Plastic Man that takes advantage of his unique skillset or personality. Gail Simone focuses largely on O’Brian’s criminal past in this installment. While Simone crafts a couple clever ideas for Plastic Man towards the beginning of the chapter, the issue quickly fizzles out and loses the potential presented towards the beginning due to uninspired character development and a dull ensemble cast surrounding Plastic Man.

Towards the end of the script, Simone starts teasing greater elements of the DC Universe bearing the potential to move O’Brian in an extremely different direction which could greatly enhance the quality of the story. Due to Eel’s crime affiliations and Simone’s in-depth exploration into his past, not very many of the surrounding cast are likable or even memorable in this case. The issue largely has to be driven on the odd personality of Eel O’Brian alone. His delightfully strange transformations and fake-outs stop the issue from veering towards a bad descriptor but still occasionally drift towards the dull, lifeless camp.

Adriana Melo’s pencils in the title are inconsistent and occasionally earn greatness. The opening page is particularly vibrant and expressive for each member of the cast. The issue is able to show off so much personality from this opening page which hints at a crime-focused angle and quirky attitude thanks to the dynamic expressions from each figure. Melo clearly enjoys drawing Plastic Man, as the creative transformations for the protagonist leap off the page with fluid design work and a silly energy.

One particular transformation featuring Plastic Man taking on a different gender achieves a marked level of greatness. There are a couple point where the title loses some of the realism and creativity for a more generic look. Whenever Plastic Man retreats to his bedroom the pacing slows down marginally but towards the end, some of the tension for the title overall also starts to decrease with sloppy linework and generic faces. The story features dark content which creates a huge disconnect when compared to the pages of O’Brian leaping tall buildings and there are times when the art struggles to communicate the tone the issue is trying to evoke.

“Plastic Man” #1 plays down the superheroes and focuses more on Eel O’Brian as a character, but Simone struggles to communicate to me why I should be invested in O’Brian as a man. Simone effectively illustrates how he has changed as a character and individual and even unearths a few moments of heartache but there was no point where I felt as connected to the material as I wanted to be due to the odd subject matter and devil-may-care attitude of Eel O’Brian and his new lease on life as a superhero. If Simone made any one visible misstep pertaining to her script for the story, it would have to do with her focus away from some of the superhero aspects and more lighthearted nature of the character.

Plastic Man is a lot of fun as an individual and even with the gang-related material in this script, Simone attempts to share his warm personality with readers. I hope going forward, Eel O’Brian will have more to smile about and the rest of mini-series takes a more light-hearted approach to his background. While the last page of the installment ends on a rushed note, some of the work introduced in the second half of the issue could take Simone in a different direction.

Final Verdict: 5.0 – “Plastic Man” #1 has a couple great moments for Eel O’Brian but fails to deliver a story worthy of his charm.