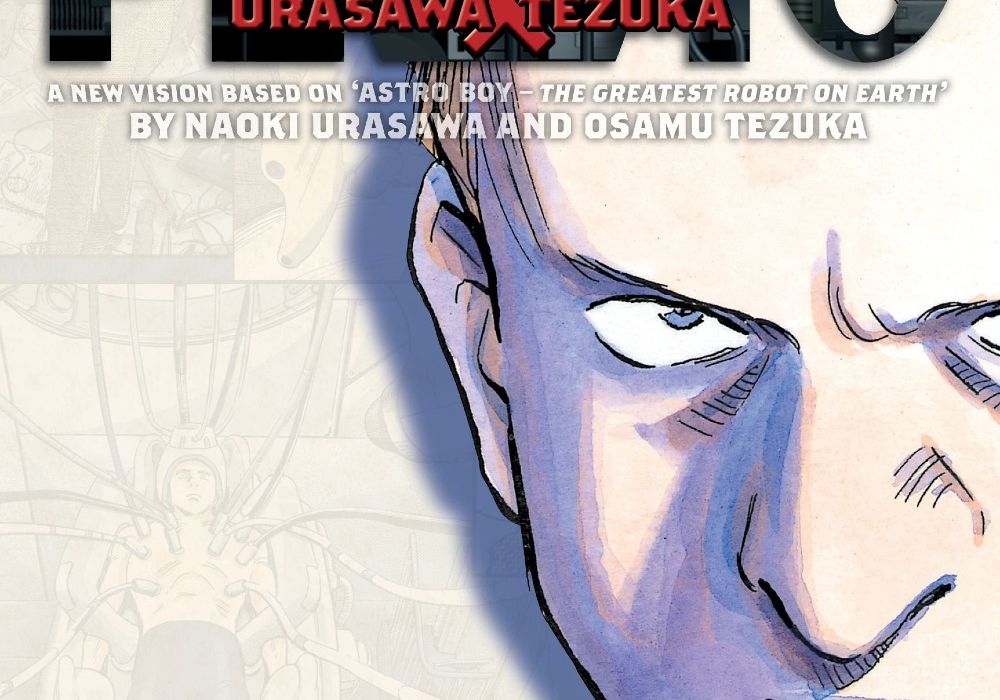 Two of the biggest names in the manga industry are undoubtedly Osamu Tezuka and Naoki Urasawa. Both have a body of work that, whilst a generation apart, are nearly completely critically acclaimed. So what happens when Urasawa decides that he wants to do his own take (a cover, if you will) on one of Tezuka’s greatest Astro Boy stories? The short answer: pure storytelling bliss. 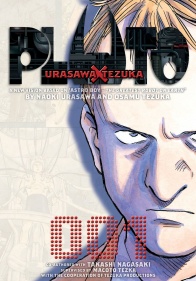 In a distant future where sentient humanoid robots pass for human, someone or something is out to destroy the seven great robots of the world. Europol’s top detective Gesicht is assigned to investigate these mysterious robot serial murders—the only catch is that he himself is one of the seven targets.

“Pluto” is technically an “Astro Boy” story, but readers will really only have to know the usual cultural white noise about that character to get into this story. Urasawa immediately hits the ground running with this story, opening up with an environmental disaster and the death of one of the seven great robots of the world, Mont Blanc. It’s here that we see one of the core themes of the story being established: Robots in this world live like humans, and some like Mont Blanc, are even treated with high regard. However, Urasawa delves into the idea of the human/robot relationship heavily in this series, as it’s apparent that outside of a select few, humans don’t think of robots in a mortal sense. When our protagonist, Gesicht, is investigating a human death, he finds out that a patrol robot died as collateral. Interestingly, a lot of the human characters have mixed or much more grey feelings about their relationships with robots, with some of the witnesses ignoring the fact completely. One notable worker, however, recalls the robot as Robby before quickly correcting himself to call it Patrol-Bot PRC Model 1332. This is the first notable moment that calls this theme into play, and Urasawa does it so subtly and quickly but with enough weight to the words that readers can’t help but dwell on that little speech mistake.

From this moment, Urasawa spirals out to deal with more of this theme of robot mortality and human connection to it in different situations. There’s an interesting constant in this world that robots have taken on a lot of human mannerisms and even started families. Gesicht visits the deceased Robby’s family to tell them the bad news. Robby’s wife processes these events slowly and says her responses with a lot of weight and consideration, feeling very compelling and human. Later on in the story, we see Gesicht check on one of the other seven greatest robots, Brando. He’s a robot that feels uncannily human, acting as a father to five kids and living in a humble, streetside house, who notes on the fact that he doesn’t want to die and leave his family alone.

On the other hand, we see plenty of interesting human interactions with robots that all vary and develop interestingly. When Gesicht meets for a checkup with his creator, we see him act friendly towards him, but think of him more like a science project, wishing to talk about Gesicht’s dreams and other quirks more than anything. The most significant event of this volume, however, is the side-story of North No. 2 and his relationship with his employer. There are some great themes of post-traumatic stress dealt with in this character that I won’t spoil. Ultimately, we see the robot North No. 2 evolve into a being capable of great emotion, and his employer change from someone who stoically hated robots and their infecting of the natural world, to someone who could appreciate all forms of life.

Urasawa’s artwork has a signature style that it’s almost instantly recognizable to manga readers, almost to the same degree Tezuka’s is. His linework has such a clean, restrained style that betrays the popular manga style at the time this book came out, yet every drop of ink here is important and unwanted. In this wat, Urasawa toes the fine line of giving his characters believably exaggerated emotion without spilling over to the hyper-exaggerated side that other manga artists can fall into. Gesicht is a great example of the baseline for how emotions are portrayed visually. Often his default is a tired, serious but somber face that can turn quickly to being tragically sad or shift ever so slightly to convey relieved happiness that works well for his character.

In contrast, many of the other robots in the story haven’t got as much visual emotional capacity, but Urasawa still finds ways to make them look incredibly evocative. The moment that first stood out to me was when Gesicht visits Robby’s wife and tells her of her husband’s death. Her visual expression doesn’t change at all, but Urasawa drags out the close up on her face, in which she is silent and still. This absence of movement or action and moment to let the story breath is great storytelling, and tells us even more than what she could ever do with dialogue. North No. 2 is another great example of this. Even though he has visual signifiers for eyes and a mouth, his face is unchanging in any of his scenes. He often plays off the emotions of his employer, Paul Duncan, who is often characterized as constantly angry or annoyed. Whenever we see Paul aggressive towards North No. 2, he backs off or looks downward almost like a dog. This use of body language plays well with Paul’s words to convey how North is feeling. The two characters play well off each other and symbolize the different stages of the human/robot relationship quite well.

Though Urasawa’s work is mostly character-focused, he also does a lot of worldbuilding and table setting through the background details. Each time a new scene begins, we’re given just enough detailing of the world around us to place us, and we see it slowly trickle through each scene to keep readers immersed, but not enough to distract from the main story. For example, the shots of the futuristic city setting have fantastical sci-fi details to inform us that this is a scientifically advanced society, yet there’s still enough normalcy that it seems familiar and like a natural evolution from our own world. Later on, we see Urasawa injecting details into scenes that contribute to characters. When we’re in Robby’s apartment, we can see that he and his wife have a stovetop, a kettle, and a coffee maker (or some robot equivalent) regardless of them being robots. It’s a great visual suggestion that they are trying to live as close to human lives as they can. Later, in Paul Duncan’s mansion, we see shots of his house when not attended to by North No. 2, with piles of unclean dishes and general mess, that reflect his chaotic and upset mood. It’s never the main feature, but these additions really round out world and make it super believable.

“Pluto” volume one is a fantastic start to one of the most highly acclaimed manga. Urasawa is using everything at his disposal here, from clever character-building to human/robot relationships that can be sure to leave a heavy emotional impression. His art is also clean and masterfully constructed, right down to the intentionally place background details that do some great scene-setting. This is an easy recommendation for anyone looking to get into manga.