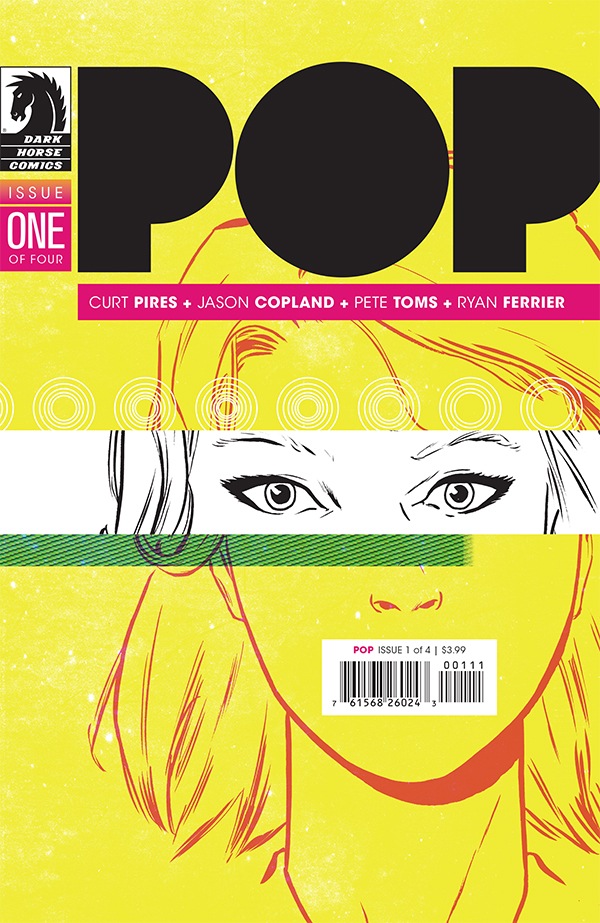 A cogent concept with a clever cover – that’s as good a place to start as any. Kicking off a four-part miniseries, this first issue of “POP” from Dark Horse is both energetic and economical. 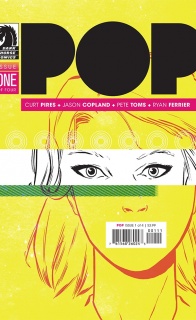 What if the world’s pop stars and celebrities were literally products, grown by the world’s wealthiest (and most depraved) minds—and one of them escaped?
As unique as it is entertaining, POP is a white-knuckled thrill ride through the marketing-mastered, technologically tethered tragicomedy we call life.
* Multiversity Comics named Curt Pires a “Creator to Watch in 2013.”
* ComicBook.com named Jason Copland a “Creator to Watch in 2014.”
* Smart and savage! Sexy and scathing!

It’s not often that a comic does precisely what it says on the tin. And by that I don’t mean “POP” is overly simplistic; it just gets to the point, quickly cutting to the heart of the plot laid out in the solicit. And while the celebrities-grown-in-a-lab idea has certainly been done before, this forthrightness makes the concept feel fresh.

It’s the quick shifts in perspective that lay things out so economically. First we’re in the head of a lab-grown celebrity, with a grid of sixteen panels hinting at the different facets of this unusual – and doomed – shot at existence. This is probably the only obscure moment of the issue; Copland keeps the camera close, the details spare, and we don’t have any story-level context for what we’re seeing. But in a miniseries especially, this feels like a solid move, establishing a bit of mystery to be followed up on later. Then a page-flip has us in the lab, where matters are dire enough not to require interpretation.

Thanks to some first-person narration from our ostensible protagonist, we find ourselves pretty well situated once we reach the fourth page. Lab-grown celeb Elle is on the lam, and stoner geek Coop is about ready to take his own life. They clash on page five, and while they both feel relatively empty as characters at this point, you can’t help exclaiming “That’s time!” It’s the concise nature of Pires’ captions combined with Copland’s feel for scene-setting detail that makes this introductory section such a breeze. Half of what we learn about Coop comes across in the background details of his house; the other half in the tone, and not only the content, of his narration.

Expository alacrity aside, it’s the more surreal moments that give this story its unique flavour. A bit of Alien-esque body horror gives us a jolt, and Copland pushes the gross-out factor here, laying out a terrifying phallic/insectoid tracking device. Later, a hallucinatory sequence comes through in all kinds of dreamlike grandeur, well-served by Copland’s scritchy line and the textured, pulpy feel of the environments. Colourist Pete Toms keeps things Warholian, using vibrant pop-art shades and skewing psychedelic-bright at opportune moments like these. And when a panel’s background is left blank for emphasis, these bright shades take over, adding that much more punch to the beats of the issue.

Unfortunately, as of this early moment, there doesn’t seem to be much behind Coop’s depressed-stoner exterior; and Copland’s portrayal of him, while precise and satirical, errs on the grotesque side, leaving him rather unlikeable. Elle’s visions, as well as that introspective first page, give us a slightly better feel for her situation; and of course, her relative lack of personality is more understandable, given she’s a newborn. The contrast between the approachability of these two characters does make itself felt, and feels like a central flaw.

It’s the last section of the issue that is the most fun, for being the most unusual; an odd couple confronts a Justin Bieber proxy and reveals for us the brutality of the celeb farm enterprise. It’s here that a strong early “Sandman” flavor comes through in both the writing and the art – somewhere in the rigidity and theatricality of the characters, and the bleak but carnivalesque atmosphere surrounding them. There are definitely worse things to be reminded of, and the gothic flavor of this encounter sends us out on a high note.

“POP” is is a lightweight but enjoyable first issue that shows plenty of promise. The art is accomplished, capitalizing on the more unnerving aspects of Elle’s journey, and the writing is admirably concise. It’s the question of character development that’s up in the air now; but regardless of any hiccups, “POP” has got our attention.