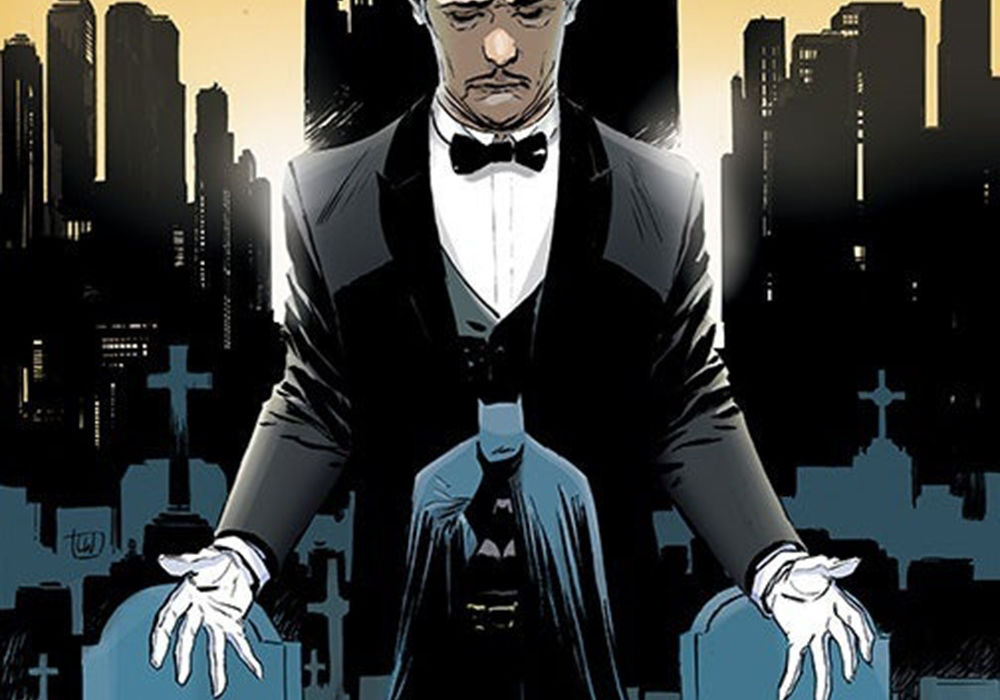 Sadness for a death combines with celebration of a life and conflict on the path forward at Alfred Pennyworth’s improvised wake. 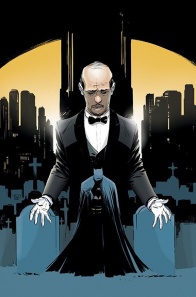 Alfred Pennyworth served the Wayne family for decades-even through the tragic loss of Bruce Wayne’s parents. His death at the hands of Bane is the only event that could possibly compare to that fateful night in Crime Alley, and it leaves Bruce at a similar crossroads. If Alfred was the glue that held the Bat-Family together, how will Batman deal with that all falling apart? And if the Caped Crusader is to be truly alone, he might either hang that cape up once and for all…or double down and carry on with this vengeful quest forever. Batman: Pennyworth R.I.P. #1 celebrates the life of one of the most important people in the history of Gotham City, while also addressing questions about what’s next.

After many decades, Alfred Pennyworth deserves a proper sendoff before the story of the Bat-Family can continue. As such, “Batman: Pennyworth R.I.P.” #1 serves as both a celebration of the character, and as an examination of what life is likely to be like without him. With six different people each giving their own reactions, their own responses to what is essentially the wake of their surrogate father figure, the lines walked by the creative team can be very difficult to manage. Thankfully, the entire creative team gives their all to a multi-faceted one-shot dedicated to the man who held them together more often than not.

With their experience writing “Batman” stories, both James Tynion IV and Peter J. Tomasi give their all to the work of putting Alfred to rest. Together, they craft a story that is not just about Alfred himself and the impact he had on every member of Batman’s “family,” but about the way his loss leaves a significant hole that is extremely difficult to patch as represented by both the difficulty the family had in coming back together without his coordination and their individual responses to not only his loss, but also to the relatively stoic non-reaction Bruce Wayne has in private, as well as his overt response when trying to help the city recover from the ‘City of Bane’ arc.

Tynion and Tomasi both examine the reactions of five different members of the family, and each of them feels very true to who they present themselves as in reference to Bruce being in this form of mourning. The overall responses range from guilt to frustration to understanding to anger to even innocent ignorance, but all of them feel natural and well written. People say stupid things, make big mistakes, and sling blame left and right, but in a manner that can be attributed to grief and hopelessness more than any form of bad writing. Through these comments, individual flaws are found not only in the now more-alone Batman, but also in the individuals verbally tearing up both him and one another, helping to showcase how these vigilantes are at their core just very flawed people in a very human situation.

By taking the lens of anguish, Tynion and Tomasi are also able to bring up some of the less popular decisions surrounding Alfred’s death. Rather than appear to be tearing down a previous work for the sake of it, this presentation helps to alleviate issues that readers may have had, making clear that bizarre choices are seen as irregular or otherwise bad from an in-universe perspective.

There are a multitude of illustrators on “Batman: Pennyworth R.I.P.” #1, between a core framing story and integrated flashbacks. From Eddy Barrows and Eber Ferreira to Chris Burnham, from Marcio Takara to Diogenes Neves, from David Lafuente to Sumit Kumar, every single artist illustrates a certain person’s perspective excellently, but each of them has their own unique tone, enabling readers to distinguish between the various different characters.

Barrows and Ferreira bring together the overall framing story to the different perspectives, and can be seen as Bruce Wayne’s own point of view. The lines are crisp and thin, with heavy use of shadow to denote both mood and the overall darkness of the meeting’s location. Emotions are shown in depth, from Bruce’s near-constant forced stoicism to Damian Wayne’s sadness to more beyond, seen best when Barbara Gordon tears into her mentor.

Burnham takes the helm for Damian’s story, emphasizing an odd, yet appropriate merger between a cartoonishness to facial expressions and a seriousness to the experiences around them, including close-ups of individual people. Such artwork helps to show the dichotomy within Damian of being both a trained killer and a child, framing Alfred as a kind of grandfatherly figure.

Takara emphasizes a thinner, more matured style in her work on Tim Drake’s tale, using enough room to provide color in a similar vein to the main story, but also utilizing a variety of perspective shots to draw attention to the high-flying acrobatics of some Robins over their occasionally brutal attacks. Furthermore, such a varied array of angles makes for a much fuller use of the physical space afforded to the story itself, from crime scenes to the Batcave itself.

For Jason Todd, Neves uses a style that seems almost at home in a noir story, with intricate facial modeling coupled with soft, yet potent shadows even in the light of day. The overall feel is one that works very well for his more violent and dark lifestyle even when compared to other family members, and also works well to show the violence utilized by the more extreme measures of the family to protect one another. While close-ups are drawn in detail, panels that are further away give far less, helping readers to get into the mind of a vigilante who sees his foes as obstacles more than individuals.

Lafuente takes a softer pencil with Barbara, his illustrations emphasizing soft features and youthful exuberance over pain or worry. Aided by the bright surroundings of much of his part of the story, his artwork is most likely to make the audience smile, acting in sharp contrast to Barbara’s harshness in the present day.

Sumit Kumar emphasizes both the darkness of Gotham and the bright lights of its cityscape in his work on “Ric” Grayson’s secondhand point of view. While the way the story is told is distinct from the others for clear reasons, Kumar manages to expertly merge the darker thoughts of Bruce with the greater hope of Dick Grayson to create a well-crafted whole in representation of both at once.

Adriano Lucas, Rex Lokus, and Nathan Fairbairn all contribute to the colors on “Batman: Pennyworth R.I.P.” #1, though distinguishing one from another can be difficult. The easiest way to describe their work is through comparison to each of the artists. With Barrows and Ferreira, the colors are cool, dark, and dour in general, but vibrant at the same time, as if representing life that is being held down and away from moving forward. Burnham’s artwork is given a relatively muted palette, as if to represent Damian’s guilt over his part in Alfred’s death. Takara’s work with Tim has a brighter array of colors, emphasizing the joy of being Robin and a part of the family over all else, even when frustrated over the handling of one case or another. Neves’s Jason has a much brighter color palette, as if to deliberately distance himself from Gotham City itself, but seems to intentionally try too hard to be different. By contrast, Lafuente’s Barbara has a brightness that is much more natural and intrinsic to who she is, giving hope rather than a sense of rebellion. Lastly, Kumar’s work on Dick’s story is a bit brighter than Damian’s, but remains dark in spite of itself, as if tainted by Bruce’s own thoughts.

Given that Alfred Pennyworth is such a popular character, it is unclear whether or not his death will have any real permanence, but this celebration of a life, coupled with despair at a death, would serve as a well-arranged sendoff of sorts nonetheless.

Final Verdict: 8.5– How much is a Pennyworth? As can be shown from this one-shot, quite a lot indeed.