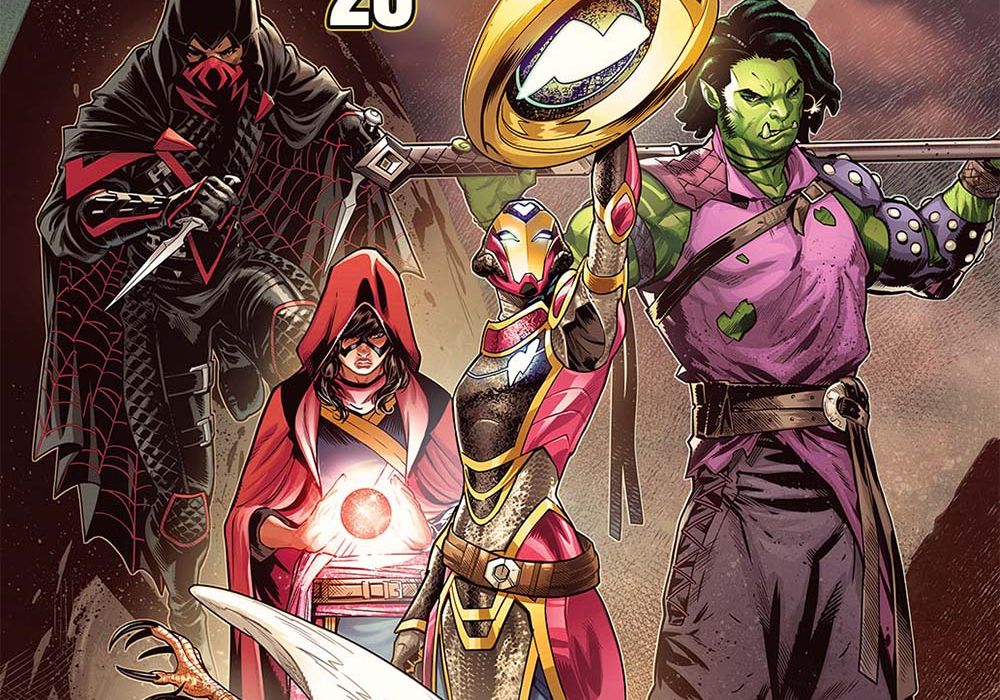 The Champions take a little detour from the world of Marvel superheroes to a world of fantasy. With some of my favorite characters entering my favorite genre, an experienced writer behind the helm and an art team that knows just how to work with the style, it’s a fine choice for our Pick of the Week. 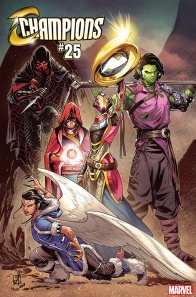 OVERSIZED 25TH ISSUE! Celebrate 25 issues of CHAMPIONS with the start of a brand-new story and a perfect jumping-on point! Swords and sorcery beckon as our heroes travel to Weirdworld, a place where dreams can come true, but nightmares are never far away! A quest begins and sacrifices will be made…

There are a few ways a writer could set up such a story, whether through imagination as the characters play or as part of a death trap from someone like Arcade or Mojo. What we get is a trip through the Nexus of All Realities, connecting the story to Man-Thing after the team faced him in a previous issue. The characters even have a proper motivation to dive into another world, since the need was set up after the last issue saw Sam Alexander and Wasp drawn into the Nexus.

The setup isn’t rushed, either. Jim Zub takes his time giving the characters a reason to enter the Nexus of All Realities, following a little bit of magic and a decent touch of character insights as we see Riri struggle with the traumatic impact of facing Thanos.

Once we enter the world, we’re all quickly introduced to the characters in their fantasy forms, but in a natural style. Rather than just having the characters go “Look everyone, I’m a wizard now!” we see their places in this new world. Half the adventure will require them all remembering who they were before coming here, but we’re quickly introduced to their new backstories and lives.

The world building in “Champions” #25 is done in a natural manner, with a little bit of dialogue exposition but a whole lot of action that draws us right into the world. There’s clearly a history to this land, one that we’re just getting bits and pieces of so far, so it leaves the readers just lost enough to intrigue us.

Additionally, every scene is filled with both familiar and lesser-known staples of fantasy worlds and RPGs. We have Ratfolk, Dwarves, and Orcs, but we can also see creatures like Goliaths and Tortles in crowd shots. This adds to the world by giving us a glimpse at the many creatures that inhabit it, while providing nice little easter eggs for fans of the genre.

I should also mention that the choices for the fantasy counterparts of each of the characters are rather clever. Riri as a paladin, Miles as a rogue, and Amka as a druid all make perfect sense. Amadeus Cho, being Hulked up as he is, works as an Orc, and Kamala isn’t exactly a magic type normally, but it still suits her. The other characters are a discussion for another time, since they either haven’t appeared yet or it would be a spoiler to discuss them.

Now let’s talk about the character designs. Max Dunbar takes over for the fantasy section of “Champions” #25, while Sean Izaakse redesigned the characters for it, and they do a great job translating everyone to the new style. Riri’s armor, for instance, takes her usual aesthetic and turns the armored suit into, well, a suit of armor. It maintains a similar style and color scheme, while changes such as the addition of a cape and plates of armor make it stylistically fitting.

Similarly, every character’s redesign maintains true to its superhero styles. Miles Morales gets a cape shaped like a spider web in his usual black and red, along with padded armor that follows the shape of his Spider-Man costume’s design. I also love how Max Dunbar turned Kamala’s Ms. Marvel outfit into wizard robes, translating the yellow lightning bolt on her chest into part of the robe’s design and her scarf into a cloak. Sean Izaakse’s redesigns are both true to the characters and fitting for this new world in a very creative way.

In general, Max Dunbar’s experience illustrating the “Dungeons & Dragons” comic comes into play perfectly here. The monsters and creatures have distinctive designs, from the dinosaur-like slavers (are they meant to be kobolds? If so, I like the idea of dinosaur-esque kobolds, though I haven’t forgotten that Saurians are a thing) to a crystalline humanoid in the gladiator pits.

The scenery looks excellent as well. We get the hot and cramped mines and forge where Amadeus is forced to work, illuminated in appropriate tones of orange thanks to the color work. The forest Riri finds herself in is bright, with greens and blues accented by flowers every here and there, but still providing the image of a massive and unknown woods. Of course it wouldn’t be a sword-and-sorcery story without an ominous castle, and Max gives us a fittingly ominous one, complete with lightning cracking in the background and mountain spires rising around it.

We get a few good action moments as well. They vary in size and scope, from Riri fighting off Ratfolk bandits to a chaotic battle in the mines to a one-on-one duel. Each fight scene is swift and fluid, with plenty of cool moves for the art to show off and panels sized and spaced in such a way that they control the speed of the action.

In short, Jim Zub shows off his mastery of the fantasy story, while the artistic team demonstrates their skill at illustrating it. I’ve been waiting for this “Champions” arc for some time, and it’s off to a great start – all we need now are some dice and character sheets.

Final Verdict: 8.1 – An engaging start to the new arc, with good pacing, character moments, world-building, and of course, great art. The creative team is in their zone for this one.