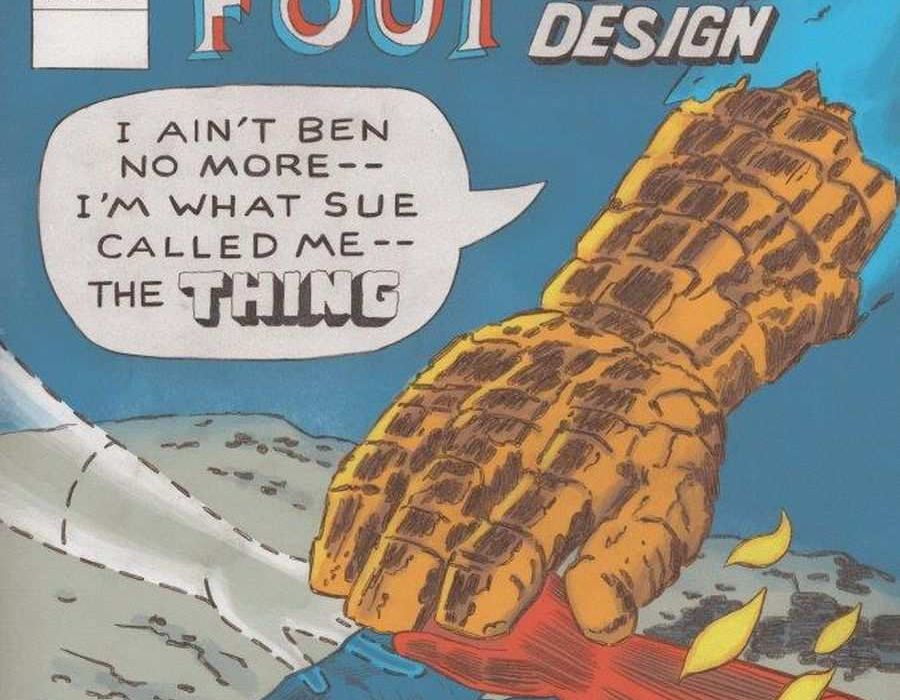 After the success of Ed Piskor’s “X-Men: Grand Design”, it was hard not to see Marvel letting in another major auteur chronicling of one of their properties for the future. It paved the way for projects like “Spider-Man: Life Story”, but the true spiritual successor to come was fellow Cartoonist Kayfaber, Tom Scioli’s “Fantastic Four: Grand Design”. Does Scioli have the skills to bring this to the same level of success? 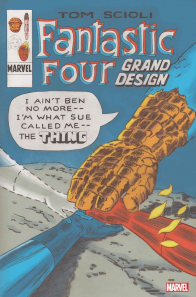 Because you demanded it! The bestselling GRAND DESIGN franchise continues with Marvel’s First Family! Brought to you by critically-acclaimed cartoonist TOM SCIOLI (GODLAND, TRANSFORMERS VS. GI JOE) in the sole-authorship tradition made famous by ED PISKOR’S X-MEN: GRAND DESIGN trilogy! Join the Watcher and witness how it all began… Plus appearances by your faves: Doctor Doom! Black Panther! Namor! Galactus! Mole Man! The Inhumans!

With these Grand Design projects, one has to marvel (excuse the pun) at the sheer level of research and connecting of disparate continuity threads. Scioli hasn’t just tried to retell the Fantastic Four’s origin from their first issue, Scioli has looked at every aspect of the Marvel that has its roots in the first family, stream-line it and re-tell it completely chronologically. Scioli even addresses this in the text, narrating “The story of the Fantastic Four is the story of the universe”, and it gives the comic a great sense of scale and perspective right from the start, telling readers to strap themselves in for a wild ride. There’s everything from Galactus’ origins, to the Celestials, Eternals, Atlantis, and even the origins of Shield to keep you busy in this comic, and it’s a whole bunch of fun.

Still, a comic needs to have solid, interesting characters for its readers to connect to, and Scioli makes sure the Fantastic Four themselves are an especially interesting bunch. Rather than glorify them for the heroes that they are made out to be, Scioli dials up the focus on their flaws from the very start, emphasizing the aspect of the Marvel Universe that it is the world outside your window. Reed is self-deprecating due to a horrible relationship with his father and Sue is somewhat vain and is a kleptomaniac, specifically a “high society grifter”. Ben is perhaps the only truly decent one of the bunch yet still has something of a temper and a bad attitude, and Johnny Storm is basically every bad aspect of the character you knew brought to the surface: he’s obsessed with self-image and has a knack for getting himself into trouble. The characters are all wonderfully interesting in how they interact with the world around them with these traits, and Scioli never misses a chance to emphasize that.

My only qualm with the scale of this comic is that it sometimes sacrifices story and readability. Sequences can, at times, feel squashed and lacking any real stakes because of how much Scioli is cramming into this comic. Often, Scioli will rely on readers having assumed knowledge of the events taking place which makes it hard to recommend as an entry point for newer readers. The introduction of Alicia Masters, for instance, is mostly sidelined instead of showing how her father, the relatively minor villain, fought with the FF off-panel and was killed within two more. It’s a little overwhelming at times and needlessly complicated, making the need to re-asses story real estate a little more prevalent in this issue.

Scioli’s art is naturally one of the big draws of this issue. His art style has always been evocative of Jack Kirby and that is absolutely the case here, with Scioli even giving the issue and the paper an aged paper quality that enhances the classic feeling of the whole comic. For someone who’s used to the comic structuring of a modern Marvel comic, however, reading this might be a bit disarming at first. Like with “X-Men: Grand Design”, the panel count per page is massive, and readers will have to spend a considerable amount of time working their way through the intricate detailing. However, Scioli has such masterful control of his line art and what details to include in any given panel to make it pop that it’s rewarding to take time and really dig into a panel. The first few pages of the story represent this idea really well, especially as we see the more abstract, Kirby-styled landscaped of the pre-historic and early Marvel Universe. Panels that take up less than a sixth of the page can be filled with details like the pre-sunken city of Atlantis, complete with statues and gleaming architecture, to shots of an undersea battle replete with Atlantean soldiers, Krakens, debris and other undersea inhabitants.

The action here is what surprised me the most. Even though pages can be at times filled with up to twenty panels, Scioli still has a great sense of sequentiality that makes the story flow superbly. Often we’ll get little two-panel sequences within a page that creates a great mini-scene: Ben driving in front of Johnny’s stolen car to stop him, or the group’s genuinely hilarious reaction to Sue calling Ben a coward off-panel. However, Scioli will often play with time to stretch out a sequence and fill it with some engaging action. I love when Ben sees the FF flare in the sky, and we get a five-panel sequence of him complaining and traversing New York by way of breaking into the sewers and floating along. The shots of the Mole Man’s monsters breaking out of the ground is also huge and exciting even when panels are literally a twentieth the size of a page. On top of that, we even get well-choreographed fight sequences, from the Mole Man schoolin’ fools with sweet staff swinging, to Ben in all his Thing-ified glory wrestling Doctor Doom into a wall and breaking his metal gauntlets.

Scioli makes this comic pop with life even with it’s faded and aged aesthetic. The colors here are very reminiscent of the classic four-coloring printing of those early days, but Scioli adds some subtle yet sophisticated shading and coloring techniques that make this still feel like a thoroughly modern comic book. There’s so much to pick from here, but I’ll touch on a few that really stood out to me. The blue lighting technique used when Ben is fighting the Hulk is glorious and makes the panel look like it could’ve been taken from a classic Kaiju film. The shot of Namor re-entering the water and regaining his memory has a beautiful undersea quality to it that stands out from other underwater scenes, driving home the fact that this scene is a polarizing one for Namor. Even little things like coloring Reed’s narration boxes blue, Ben’s orange and so on make the story so much more engaging and easy to follow, showing that Scioli obviously knows how to work the tools of his craft.

“Fantastic Four: Grand Design” #1 is a comic all about scale. There’s so much here in terms of story content, containing so much of the Marvel Universe’s history. There’s also so much here in terms of character development and working with neat plot threads to make the whole thing feel like a grand tapestry. The art conveys this too, with so many interesting techniques on display here, and even a mammoth panel count throughout each page. If the story of the Fantastic Four is the story of the universe, then the story of Tom Scioli’s work here is the story of how to make a damn fine comic book.

Final Score: 8.9 – “Fantastic Four: Grand Design” #1 is a masterclass in compressed storytelling and scale in visual and narrative aspects.