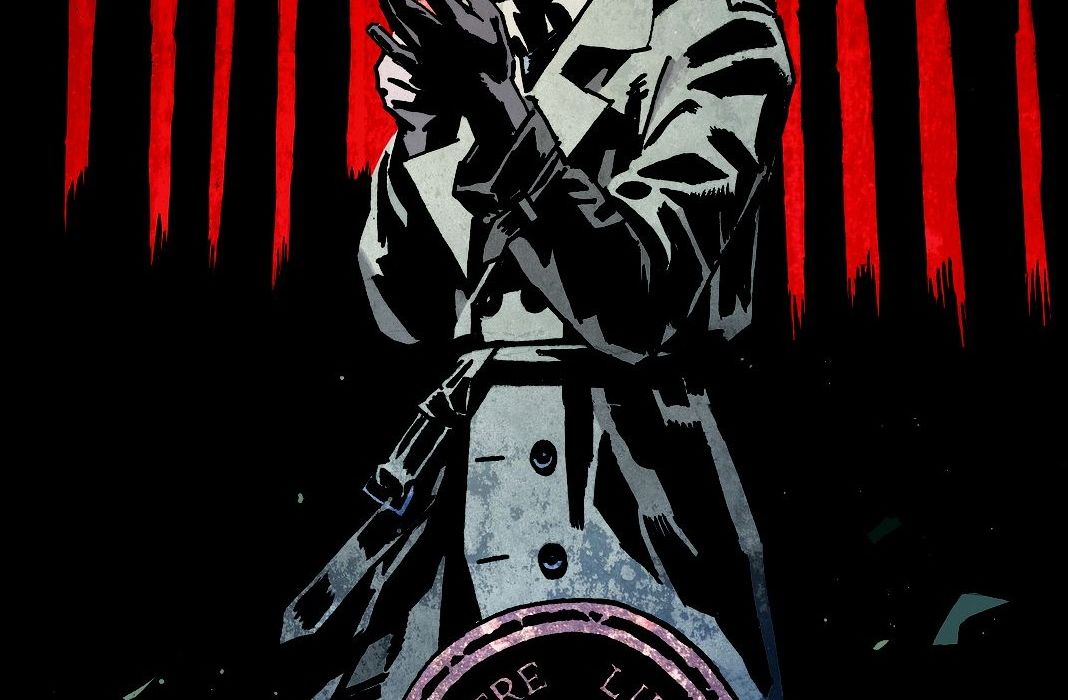 John Constantine, the dark magician known as the Hellblazer, is back in England after years away with assisting various Justice Leaguers. This new series takes Constantine back to his gritty roots continuing his story and gives readers a soft re-introduction to the character as he is brought into the fold of the expanding “Sandman Universe.” 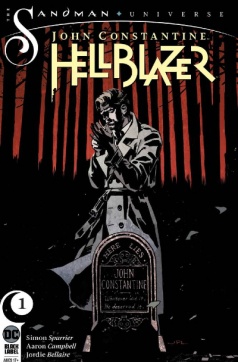 John Constantine is back in England and feeling a bit out of touch with the times and the culture. He’s spent years away with the Justice League Dark, trying his hand at the superhero game. Like usual, John is running from something – his past, responsibility, the horrors of the supernatural but things are about to get messy and of course he’s going to be pulled into the middle of it.

There are creatures, who at this juncture are being called Angels, skinning people and absorbing their essence. Violently crossing into our world to wreak their havoc and destruction, how can these beings be sent by God, or the side of Good when their acts are so similar to the Evil beings that John has fought for so many years?

This soft reboot of the Hellblazer series takes John back to his roots, not just with the setting of London, but in the overall tone and style of this new series. It feels like a perfectly natural progression of this series. As DC Comics took a tonal sidestep with him bringing him into the two New 52 series “Constantine” and “Justice League Dark”, it felt right for the time, but now this is once again the right move, for the time. While those adventures had some solid horror elements, they focused on a softer, more modern superhero fantasy tone. It worked for the most part, but the uncomfortable, truly scary parts of Constantine’s life needed to come back, and this first issue is a welcome return to form. This attempt to reconnect the character to his older storylines was done in DC Rebirth’s 2016 series “The Hellblazer,” but things didn’t really take off with that.

Simon Spurrier’s script is soft spoken, slick, and grounded in reality. While there are supernatural events going on around him, the lack of big reactions are one of the main tonal choices this universe is known for. Seeing John stumble around in the gutter, get tossed from bars, have people throwing his past failures in his face, and even kidnapping him for their own nefarious schemes are all things that make this character and series what they are.

There are no shortcuts with setting or cultural necessities either. It’s England, the accents and slang flow freely, and it is for the better. It is as natural as it can get. There is no pandering to those outside of London or even the UK, you read it, if you don’t get it, read it again until you do. That said, there is nothing in the flow of conversation that isn’t easy to pick up right away. And that is what this first issue is: conversations. Although there are some nasty and horrifying things going on, this issue really takes its time to talk to us as the characters talk to each other.

Whether it is John flirting with Nat, the strong and clever bouncer at the local pub, local gang members discussing inner dealings, or those who would use dark magicks to destroys us all, there is a wonderful amount of detail. The pacing is outstanding. There is a patience to it, but it never drags. The story and set dressing move along for all 22 pages. Even in the original series there were stories that just pulled you along for the ride, but took forever to get to the point without keeping you interested along the way. This issue thankfully never does that.

Spurrier’s writing truly captures everything that has worked in past and cuts away what is unnecessary. This is an excellent re-introduction to this character that any reader can pick up, even with the most rudimentary knowledge of Constantine. The story includes everything that should be in a “Hellblazer” comic – everyday Londoners, seedy underworld dealings, monstrous visions, deformed people, and of course, John being a smartass.

Aaron Campbell’s artwork, like the script, are a return to form, both in taking cues from the original series, and pulling it into this ever-expanding “Sandman Universe.” His art feels very similar to Dave McKean or Tim Bradstreet. At times he gets close to dabbling with realism, but pulls back to keep this series more ethereal. We get just enough detail in each illustration, but his pencils are never wispy or unclear. His work moves is all at once nasty, dirty, gritty, nightmarish, and intangible. Opening this series with a panel that is akin to a hellish magic eye poster was a perfect choice. Every page is other-worldly and uncomfortable. Even if John’s blue humor is focus of the text, there is hardly a single moment in which the reader is allowed to relax. Like John himself, we are always waiting for the other shoe to drop, always looking over our shoulder to see what is following us in the shadows.

While Campbell’s work may be a throwback to the original Vertigo series, Jordie Bellaire’s colors are an outstanding blend of new and old. Her work does a lot of the heavy lifting. Her choices and sensibility bring out all of the beauty and absolutely disturbing details throughout the entire issue. As one of the best and most innovative colorists working today Bellaire was a perfect, and honestly unexpected, choice for this series. Though she has worked on many DC titles, this was a nice surprise to see her name on the book. Her use of clashing palettes and intriguing use of light is some of the best color detailing in this book.

Like Campbell’s beautifully messy and disturbing images, the story slowly comes into focus with each page. The pacing is truly the strongest part of the storytelling. We get just enough information to pull us, along with John, back into this terrifying world. This has everything fans of this character and horror/fantasy comics could want, and readers will definitely be itching for more by the time they reach the final page.

Final Verdict: 8.5, A unsettling, violent, and welcome return to the world of “Hellblazer.”