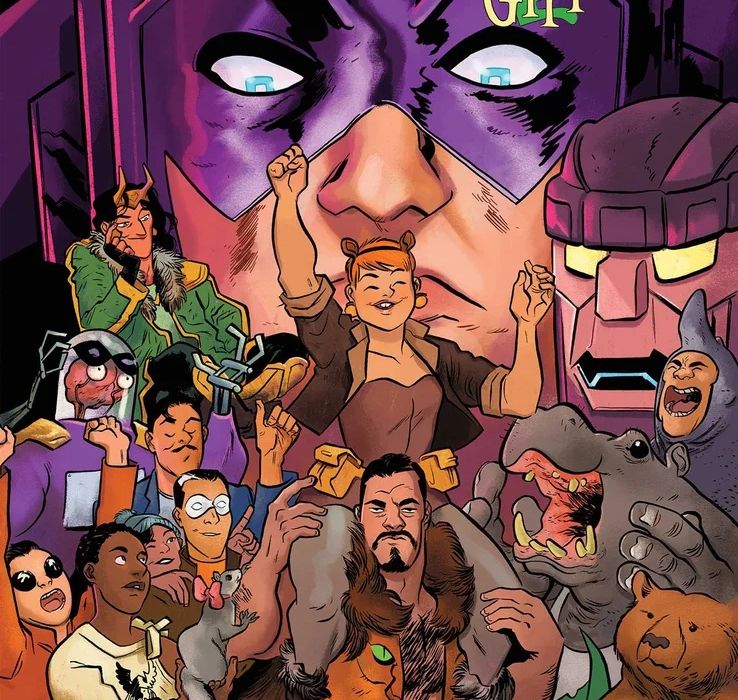 Since 2015, “Unbeatable Squirrel Girl” has been one of my favorite ongoing comics. The well-written, well-developed characters, the way Doreen defeated villains through empathy more often than through violence, the bright and colorful artwork, the way it embraced all the insane but awesome aspects of the Marvel universe – everything about this comic made it a must-read every month. Now it’s come to an end, with issue #50 (which is technically it’s 58th issue, due to “Secret Wars” causing everything to restart from issue #1).

So let’s take one last look at “The Unbeatable Squirrel Girl,” see how Ryan North and the entire team behind the comic bring it to an end, and say goodbye to one of the most consistently entertaining and unique comics Marvel has had.

Naturally, since this is a final issue, there will be spoilers. 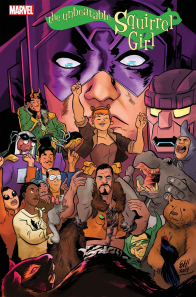 FINAL ISSUE!
•  This is it! After 58 issues (comics numbering is, dare we say: nuts), an OGN and a whole bunch of both eating nuts AND kicking butts, The Unbeatable Squirrel Girl reaches its 50th and final issue!
•  When we say “The Unbeatable Squirrel Girl’s final issue” though, we mean the comic book, not the character. Doreen Green will be fine! She’s fine!
•  …OR IS SHE? Because in our previous issue it really seemed like things WEREN’T fine and since it’s our last issue maybe we’re feeling that since anything COULD happen then anything SHOULD happen!
•  There’s only one way to find out, and you’re looking at a solicit text for it!
•  Friendship, explosions, and friendships forged during explosions: it all comes down to this!

Issue #49 ended with quite the cliffhanger. All of Squirrel Girl’s greatest enemies had gathered and hijacked Tony Stark’s Iron Man armor for their own purposes, then Squirrel Girl jumped on a bomb to save her friends from the resulting explosion. All in all, it was a climactic buildup to the final issue.

However, if you’re expecting plentiful violence to resolve all their issues, you clearly haven’t been reading this comic. (In fact, the explosion at the end of the last issue turns out to be little more than a painful inconvenience compared to Doreen’s durability.) One of the greatest strengths for “The Unbeatable Squirrel Girl” (both the comic and character) comes from the power of dialogue. Doreen Green has managed to connect with her foes and talk them down, to the point where they become friends. It’s this strength that truly comes through in the end, which makes for a much more satisfying conclusion than just defeating villains by hitting them really hard. Even if there are foes she can’t reason with, it’s still Doreen’s strength of character that makes her the hero she is.

In fact, the actual conflict gets resolved relatively early in the issue, although in a very satisfying manner. She wins not because she’s physically stronger or smarter, but because of the connections she’s made with characters across the Marvel universe.

We see the strength of Doreen’s character when she talks to Galactus about why he can’t just kill her enemies, and the strength of her heart says she’s decided not to hate them back.

As it is the final issue, a lot of time is spent saying goodbye to the characters and tying up loose ends. The last arc changed a lot of the status quo – particularly by revealing Squirrel Girl’s secret identity to the world – so there’s a lot to unpack, but it all plays out at a good pace.

We get Doreen and Galactus talking about change and stories, using Galactus’ Power Cosmic to lean on the fourth wall. This is a great way to discuss the nature of stories, as Galactus talks about how people can look back at great comic moments and revisit them or experience them for the first time. It’s a heartwarming moment to discuss the nature of stories, even without breaking the fourth wall enough to say “this is a story that people can read.”

In doing so, the comic also acknowledges the nature of change, particularly with other writers. Kraven’s appearance, for instance, left some readers wondering how it connects to continuity after his death in the pages of “Spider-Man.” Not only does that get explained, but we even get a fond farewell from Kraven as he leaves.

“The Unbeatable Squirrel Girl” #50 does a good job wrapping up all the various plot points it brought up in previous issues. Doreen and Nancy’s apartment was destroyed, but they survived. Doreen’s secret identity is out, but she’ll adapt. There’s plenty of speeches, to be certain, but it all brings a sense of closure that’s undeniably satisfying.

It’s also worth noting how much comes full circle at the end of this issue. When “The Unbeatable Squirrel Girl” first began, we had Doreen singing a Squirrel Girl theme song (to the tune of the classic “Spider-Man” jingle, naturally), then going to the moon to face Galactus. This final issue calls back to Doreen and Galactus having a meaningful conversation on the moon, before bringing everything back around with a new theme song.

This time, however, it’s different. It’s not just Squirrel Girl the song is about, but Doreen Green, the person herself. It highlights all her adventures and successes throughout the comic’s run, ending with a reminder of why we love Doreen Green – the Unbeatable Squirrel Girl.

Even the cover brings a thematic closure. While issue #1 of “The Unbeatable Squirrel Girl” featured Doreen daydreaming of behind hoisted up and celebrated by her fellow heroes, issue #50’s cover brings it to fruition. More than just the Avengers, it’s the friends she’s made along the way – everyone from Nancy and Brain Drain to Galactus and Loki. Comparing the two covers, we can see the amazing journey she’s made through these 58 issues (plus an original graphic novel).

And of course, it wouldn’t be “The Unbeatable Squirrel Girl” without the amazing art team behind it. Derek Charm wraps up his run as artist, with Rico Renzi managing the color work from every issue until now. Derek’s artwork is very clean, leaning on strong linework that doesn’t bog things down with extra detailing. It provides an almost cartoon-like solidity to the images, keeping everything easy on the eyes and a pleasure to view.

Rico Renzi’s color work is bright and solid, matching the clean designs of Derek’s art. The coloring has remained the same even as the artists have changed, so it all feels very familiar no matter who’s behind the pencils. The bright coloration helps the comic stand out from many of the other books on the market and establishes the tone and identity of “The Unbeatable Squirrel Girl” quite well. There’s nothing grim and gritty here, and that’s great.

In fact, we get some truly beautiful moments out of the artwork as well. When Squirrel Girl and Galactus talk on the moon, the illustrations and color work are gorgeous. I dare anyone to look at the full-page image of Galactus and Squirrel Girl sitting back in a crater and gazing up at Earth, reflecting on the time they first met, without getting teary-eyed.

So with that, it comes to an end. Overall, how was “The Unbeatable Squirrel Girl?”

This is a comic overflowing with creativity, heart, and humor. Every moment, from the first page to the last, is filled with great dialogue, artwork perfectly suited for the series, and a love for the characters and comic as a whole.

“The Unbeatable Squirrel Girl” embraces its place in the comic universe. Throughout its run, we’ve seen Doreen and company study computer programming, travel to the deepest reaches of space, fight robot dinosaurs in the Savage Lands, kick off wonderful villain redemption arcs, travel through time, fight in the War of the Realms, and so, so much more. Not a single moment felt unnatural or out of place, and every story arc was a thrill.

Every character – Squirrel Girl, Tippy Toe, Nancy, Chipmunk Hunk, Brain Drain, and so many more – give us something to love. From Doreen’s unwavering optimism in the face of evil to Brain Drain’s amusingly nihilistic outlook, we’ve grown to love everyone who’s been a part of this series.

Final Verdict: 9.8 – A perfect ending for an amazing series. Ryan North, Derek Charm, and all the comic crew bring their A-game for a series that cannot be missed.

Thank you, Ryan, Erica, Derek, Rico, and everyone behind “The Unbeatable Squirrel Girl.” And thank you, Doreen Green. This comic truly is unbeatable.