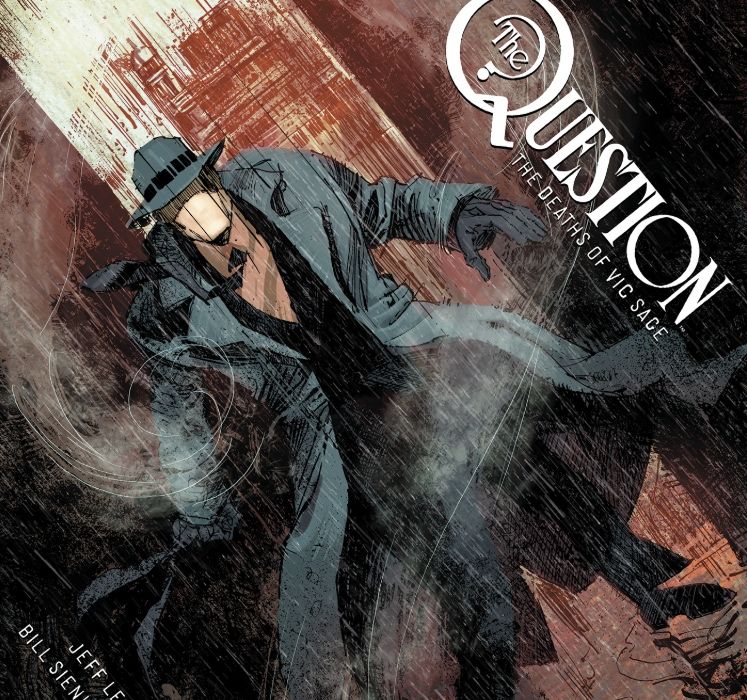 “The Question: The Deaths of Vic Sage” #1 is a clever homage to Vic’s past and an interesting introduction to the character in the 21st century. Warning: spoilers ahead. 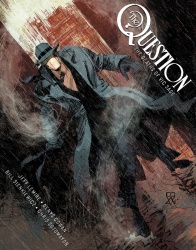 Cover by Denys Cowan, Bill Sienkiewicz & Chris Sotomayor
Written by Jeff Lemire
Penciled by Denys Cowan
Inked by Bill Sienkiewicz
Colored by Chris Sotomayor
Lettered by Willie Schubert For years, Vic Sage has worn the faceless mask of the Question to clean up the streets of Hub City by sheer force of will. He knows right from wrong. He knows black from white. But what happens when he is drawn into a conspiracy that reaches from the heights of Hub City power to the depths of its underground tunnels? What happens when things stop being black-and-white and start getting a little gray? And what happens when, in a secret chamber deep beneath the city, Vic Sage meets his own end…and his new beginning?

“The Question: The Deaths of Vic Sage” #1 (hereafter “The Question” #1) inherits the mystique, tone and partial creative team behind “The Question” published in 1986 by DC Comics. Denny O’Neil, Denys Cowan, Rick Magyar, Tatjana Wood and Gaspar all lent their talents to Vic Sage’s first starring role, and gave the character the gritty, uncompromising and divisive personality that defines him today. This creative team features a few familiar faces and dives back in with the same uncompromising tone, plus some psychedelic possibilities that make this first issue an exciting one.

Lemire, Cowan and Sienkiewicz put on their best gritty crime hats to dig into Hub City, and while the dialogue has a little bit of that Black Label enthusiasm, it feels pretty natural. We get an immediate sense of place thanks to Cowan’s sketchy line, Sienkiewicz’s textures and Lemire’s hard-boiled tone, and Vic has the single-minded purpose that often gets him into hot water from the first moment. There are a few subtle moments of wordplay, as there should be. Where things break down just a bit are in the issue’s climax: Vic’s unceremoniously spat out the other end of a truly bizarre experience, and the issue carries on to hit a few plot points too many to make that revelatory moment stand out. Still, we’re left with no doubts that Vic Sage is going to be in for a very weird ride, and Lemire’s proven skillful with a balance of the esoteric and the personal in the past. Vic’s identity is important to him, and he rests all his convictions and his actions on his unerring sense of right and wrong – black and white, as he calls it. There’s a lot of storytelling potential in ripping that rug out from under him, and Lemire can definitely deliver.

Cowan dials down the muscles a bit on this contemporary version of Vic, but the suit and its crisp angles still make quite a statement on the page. Cowan doesn’t mess with layouts too much and lets Sienkiewicz amp up the texture and chaos within the panels. This internal/external tension suits the character and the kind of story the team’s trying to tell. The noir of Vic’s world is tired, beaten down and dragged through the gutter, and everything’s just slightly awry. Cowan and Sienkiewicz work well together to make Vic mercurial, and some of the shifting facial details on the page are clearly intentional. They mostly track, and Sienkiewicz keeps the shading delicate toward the beginning of the book and more frenetic as Vic’s world starts to break down around him later on. With Cowan and Sienkiewicz at the helm to orchestrate the visual breakdown, it should continue to be a visceral experience.

Sotomayor does a good job of going for a soured palate and echoing Sienkiewicz’s texturing in the background. Hub City’s a bit like psychic spoiled milk, and the sick greens and yellows that dominate the early backgrounds speak to the harsh industrial quality of the baked-in corruption, as well as the chaos nipping at everyone’s heels. Sotomayor accents Sienkiewicz’s take on Vic’s personal atmosphere with some nice washes of grey and white, and Vic’s mask is the perfect shade of unmarred, baby-soft skin. It’s a little unnerving, and it’s meant to be. During the descent, Sotomayor starts dialing up the primary hues to signal that there’s psychological turmoil at hand, and Vic’s flashlight is a fiery glow that bathes the entire scene in the right amount of primal, fetal tension.

Lettering Cowan and Sienkiewicz is a difficult task, as slapping slick balloons over the scratchiness and dynamism is an easy way to dissolve some of the mood. Still, Vic’s monologuing and harsh dialogue carry a polish that allow Schubert to play with a relatively uniform, peaky font and round balloons. Sound effects generally appear on pages or in panels without additional dialogue to contend with, so they function well as beats and don’t overwhelm. Vic’s narration is done in a blue that mirrors his suit, almost as if he can’t ever put the mask down, and the thin blue outline on the narrative boxes helps them blend into the art.

“The Question” #1 will have to prove itself in its execution, because there’s a lot set up in this first issue to deliver on. There are many homages to the original O’Neil and crew story, but Lemire and the team are building something new, introspective and strange that invites, but does not require, familiarity with the character. Vic’s stories tend to work best when there’s a lot at stake so we can feel that knife-edge breathlessness that comes from a city on the brink and a man for whom the material’s no longer functioning as it should. What better way to up the ante than to dislocate him not just in his quest for justice, but in his sense of self?

Final Verdict: 8.0 – “The Question: The Deaths of Vic Sage” #1 pays tribute to an underrated classic and primes the pump for a trippy new adventure.