A costly secret threatens to expose the cracks in the Chicago Organised Worker’s League as their relevance in a world without super villains is called into question, while the ‘supes face-off against the force across the picket-line. Higgins, Siegel and Reis are forging new ground with a story seeped in American history. 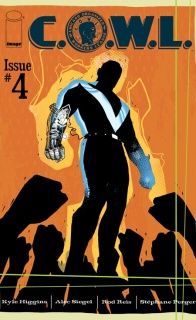 As City Hall continues to threaten Geoffrey Warner, Blaze must find a way to unite C.O.W.L….even as John’s investigation brings a dark cloud over the organization.

At only four issues in, “C.O.W.L.” has already started garnering some seriously complimentary comparisons from fans and reviewers alike. Similarities between comic-book classics like “Watchmen” and “Astro City” can be drawn with considerable ease, and the obvious but applicable nod to the Emmy-devouring show Mad Men is all but inevitable. All that being said, this is a book that is quickly establishing an identity all of its own, and the strength of this self-awareness is what pulls the – often quite disparate – strings of storylines together so successfully.

Writers Higgins and Siegel have taken great care to present a fully formed and meticulously detailed version of 1960’s America and, three issues in, they’ve already begun to address a number of the social issues that plagued the era. We’ve seen their take on the treatment of women in society, the disillusionment of a post-WWII public with ‘heroes’, and in this most recent issue the duo turn their hand to address unionised workers and striking, all of which gets is channelled through a sepia-toned, super-powered prism.

But, given the broadness of these issues, the team manage to approach them with a surprisingly nuanced and balanced approach. They’re not looking to re-write history or plot some kind of utopia, far from it. For all their caped crusaders, their world is a pretty faithful analogue of our own and, like it or not, their heroes have to live in it.

So far this series has been decidedly focussed on the human side of its character’s struggles, and this latest issue doesn’t try to buck the trend. This issue’s ‘protagonist’ is Reginald ‘Blaze’ Davis, one of the most senior members of C.O.W.L, and a firm believer in the potential for ‘Supes to do good. We get a glimpse into his home life and we’re treated to a look at the debate of the week, the uneven balance of power between the police force and C.O.W.L.

Reis’ artwork captures the idyllic nature of Blaze’s home-life with his usual delicate panache, transforming a series of talking heads into a touching exchange between a blended family. It’s hard to believe this is Reis’ first foray into the world of comic-books. His ability to isolate the most important focal points for each story beat combined with his distinctive style is sure to guarantee him a shot at even higher profile work in the future.

One of the most interesting decisions that Higgins and Siegel have made with this book is the time they’ve chosen to introduce us to this world. Issue #1 saw C.O.W.L make short work of the last member of ‘The Chicago Six’, the city’s cabal of costumed villains, and now we follow our heroes as they explore just how much they might have to suffer as victims of their own success. It could be argued that Higgins and Siegel have started at the end of the action, but part of this series’ singular appeal is that it focuses on the fallout of a world that may no longer need super-heroes. C.O.W.L’s operatives – equal parts athletes and celebrities – have become accustomed to a very particular way of life and, now that it seems as though it might be reaching an end, Higgins and Siegel are giving us a look into the lengths that they’ll go to retain it.

This temporal choice gives Reis a chance to create a world, and a slew of characters, that have already been affected by the touch of power. Rather than garish facial scars or obvious war-wounds we’re shown this effect in more subtle ways, greying temples, engrained laughter lines, sagging shoulders and protruding bellies, as well as a general noir-esque twist on the colour palette that feels like the natural transition from the star-spangled days of C.O.W.L’s long-lost youth.

Reis seems to understand perfectly how to translate Higgins and Siegel’s unique brand of super-heroic realism to the page. His collection of demi-gods that straddle the gap between the common man and the Golden Era goliaths that preceded them. Equal parts Siekiewicz and Noto, His frantic line work and faded, oil paint-style colouring balances the crackling thrill of power against the tender humanity of the characters.

His attention to detail when it comes to facial expression and body language means that the debate between the Mayor of Chicago and The Grey Raven, the leader of C.O.W.L, about the fate of superheroes in the city sparks with as much tension as any of the super-powered brawls that we’ve seen so far this series.

All of which isn’t to say that we’re bereft of super-violence by any means. Higgins and Siegel manage to balance bureaucracy and battles with a masterful touch. They’ve built an obvious hierarchy into their world which seems like the natural conclusion of a world in which not all super heroes have the good fortune to be blessed with delayed aging. While the younger, more vigorous heroes pound the streets and try to handle their problems with their fists, C.O.W.L’s enigmatic leader proves that often the pen can truly be mightier than the sword.

“C.O.W.L.” is a unique and beautiful study of the power of politics in a world where the rules for super-heroism are being redefined. A period drama with more modern relevance than many other books out at the moment, Higgins, Siegel, and Reis have created a colourful comic-book world that is obsessed with the shades of grey between right and wrong.

Final verdict: 9.0 – one of the best original series I’ve read this year