In a far-off corner of the galaxy, on a planet that can read thoughts and adapt its gooey structures to defend itself against attack, blue-haired outsider Vep attempts to establish a new home for her exiled people. Which she does mainly through some cool, psychic power-assisted fight scenes in the latest issue of this neon-colored sci-fi epic! 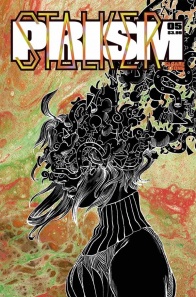 Written and Illustrated by Sloane Leong
Lettered by Ariana Maher

Wills amalgamate and desires diffuse. Within an emulsion of sensation, Vep extracts a dream, an alloy of intention.

Science fiction is a much broader church than most comics in the genre would have you believe. I’ve lost track of the amount of short-lived Image books which are be categorised as “sci-fi,” yet which uniformly hew close to the same aesthetic, characterisation and narrative tropes as Star Wars. They all blend into one. Each of them recycles rather than innovates, dressing up in the same generic items (many of them hand-me-downs from the Western) with hopes that they have accessorised them in such a way as to appear novel.

By comparison, Sloane Leong’s “Prism Stalker” is bespoke haute couture science fiction.While this fifth issue continues to follow a traditional “Hero’s Journey,” it does so in a way that’s almost completely unheard of in comics. Leong’s fleshy, psychedelic “bio-punk” style has some precedents, but is more of a kin with European comics by the likes of Philippe Druillet and Enki Bilal, as well as the work of contemporary Simon Roy.

At this stage we’re well-acquainted with the book’s protagonist, Vep. The refugee from a quarantined planet has left behind her family to enlist with a Chorus Academy. Since arriving she’s been training with a group of over waifs-and-strays collected from across the universe, before being sent to nurture settlements on a newly-developed planet at the behest of a semi-benevolent galactic order.

All of this is gotten across without clunky, expository world-building. Instead, it emerges organically in Leong’s writing, which follows a sort of elliptical narrative style not unlike Kelly Sue DeConnick and Emma Rios’s “Pretty Deadly.” It’s this form of storytelling which also sets “Prism Stalker” apart from the crowd.

“Prism Stalker” #5 sees Vep and her fellow Chorus recruits continuing their training in pneuma, a form of combat somewhere between Green Lantern’s ring and the weirding way from Dune. Those adept in it can “deny what [they] know in their bones and instil a new law of reality in them” and their opponents, as their instructor tells them in this issue.

What that looks like in practice is messing with the heads of enemies by projecting horrifying hallucinations, and actual bodily transformations, into their heads. These “echo”-assisted scraps unfold in thrillingly weird sequences where colors invert, Leong’s thick brushwork is pulled apart at the seams, and everything gets a bit…trippy. They’re action scenes as freak-outs/nervous breakdowns.

The use of color, symbolic imagery and the half-remembered traditions of Vep’s elders recalls real-world faith systems such as that of Native Americans, the Yoruba people, or Indigenous Australians. Perhaps fittingly, the shadow of colonialism is cast as wide across the world of “Prism Stalker” as it is our own, albeit on a cosmic scale. Vep’s people are a displaced tribe, taken from their home planet, and she has taken it upon herself to find them a new place to dwell.

To do that, she has to fight, and there’s plenty of actual battles to go along with the existential, psychological form of pneumatic combat Vep and co are schooled in. It’s during these action scenes — with their speed lines, the names of the techniques characters are using appearing on-panel and the choreography of each fighter being broken beat-by-beat — that the manga influence is felt most on Leong’s cartooning.

In concert with Ariana Maher’s lettering, which is often incorporated directly into the artwork (a neon-drop-shadowed “SHHK” as Vep dodges a kick from a sparring classmate, a forceful “WHAM” as she’s pile-driven into the ground soon after), these moments are intensely visceral.

In places the coloring — which is already notable for its use of a mostly day-glo color palette, in contrast to the dingy rust belt hue of most “conventional” sci-fi comics — is used to heighten these intense feelings, as when Vep strikes a winning blow in a bold splash page which inverts the colors of the scene. Leong employs a similar trick during another nightmarish sequence where her lead character barely claws her way back from one of those aforementioned pneuma freak-outs, something which is rendered in a style similar to Marley Zarcone’s psychedelic work on “Shade, The Changing Girl.”

“Prism Stalker” is a breathlessly inventive, visually arresting psychological sci-fi with more ideas crammed in per page than most series manage in a whole run. Yet in spite of that dense level of detail, it never feels weighed down by backstory. Instead it moves at a fast clip while paying appropriate mind to Vep’s development from wide-eyed naif to skilled echo fighter.

Her struggle to maintain a sense of self on a planet that’s all about adjusting your reality and attempts to find a belonging amongst the multifarious extraterrestrials that make up the Chorus Academy (including giant talking dogs, bipedal cat people and pint-sized talking bug) ground the more out-there visual explorations of her troubled psyche in something concrete and emotionally real.