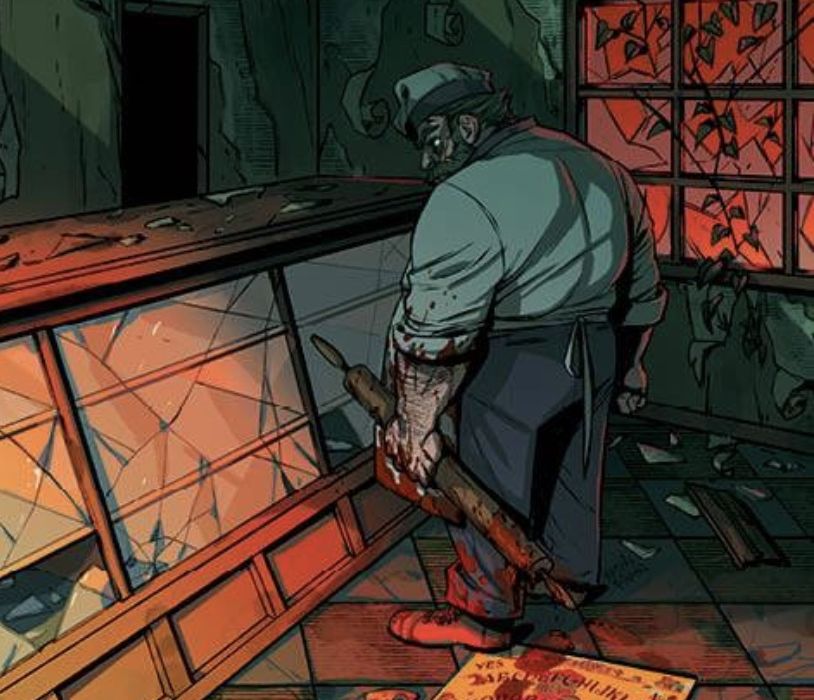 “Proctor Valley Road” #4 sees our fearsome foursome visit a hospital, contact a baker, channel the Landlady and get into some friendship-ending arguments. Warning: spoilers ahead. 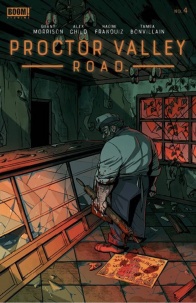 Cover by Naomi Franquiz
Written by Alex Child & Grant Morrison
Illustrated by Naomi Franquiz
Colored by Tamra Bonvillain
Lettered by Jim Campbell
Plagued by day terrors and visions of a drenched woman, the girls search for answers about Proctor Valley Road at another haunted spot, the abandoned Haven Bakery. Their inquiries into the spirit world will lead them to the local tribal reservation, but not before Rylee and August’s feelings for the same boy threaten to tear the group apart…

“Proctor Valley Road” #4 continues the jam-packed story with some daymares, more near-death experiences and the same wry humor that’s supported the narrative thus far. Child and Morrison work hard to integrate as much period-appropriate politics and cultural backdrop as they can into this comic, but the real humor hinges on the quartet’s buckets of sarcasm and one-liners. A little goes a long way, however. We’re often inundated with call-and-response quips while plot points struggle to take center stage, and in this issue the balance is just a bit off. Child and Morrison rely on a certain level of melodrama that’s welcome, but the town’s animosity is sometimes applied to the story unevenly, and some of August’s attitude and chipper hostility doesn’t always feel earned.

So it goes with this issue’s conclusion, in which the four friends let the stress of the situation get to them and have an age-appropriate fight over boys, money and crushing each others’ dreams. It’s executed relatively well, but spans just a few short pages that could’ve given us a chance to breathe and reorient before ramping up into whatever the Landlady has planned for them. The rhythm of “Proctor Valley Road” #4 was a quick rev in issue #1 and we haven’t come back down from that tense high. Jokes and novelty gore are starting to blur together because we could use just a small break, and so far we haven’t gotten it. What that break might look like is up to readerly taste, perhaps, but puncturing the dark levity occasionally for a sober comment or two – and taking a beat to let them really land – could do the trick.

Franquiz’s style is perfect for “Proctor Valley Road” because we’re lulled by the gentle cartooning and middle-age feel, and rightly shocked by some of the more gruesome monsters and shades. The girls complement each other in clothing and styles that reflect their personalities, and Franquiz understands ‘70s fashions well enough to pull off the aesthetic without relying too heavily on well-known brands or motifs. Franquiz really shines when it comes to the ghosts and goblins and odd stuff in “Proctor Valley Road,” however, and Bonvillain adds excellent floury flair to the baker’s sinister form. He brandishes the rolling pin with woe and just a hint of an edge, and we’re laughing even as we take in yet another tragic facet of this way-too-haunted locale. The Landlady can appear a bit overly cartoonish at times, but some of that is down to her operatic threats and bwa-ha-ha vibes we get from whatever her evil schemes have in store for the girls. Franquiz’s work alone carries off the ghoulishness, and toning down the dialogue here might make her character seem a little more sinister.

As mentioned above, Bonvillain’s work is excellent, with themed palettes spanning pages and often alternating panels. Of particular note are the dusty exterior tones against the purplish interior of the bakery, which is the perfect desert sunset unity we’re looking for in a day-to-dim-to-day-again scenario. Bonvillain also picks the perfect shades of acidy green and red when things need to get good and gross. When the dialogue doesn’t let us linger on any particular mood, Bonvillain’s work on the final pages does signal a return to some sort of equilibrium, as we’re treated to a mostly normal day-lit scene and the conflict becomes interpersonal, not supernatural.

Campbell chooses a font with subtle flair and a balloon stroke that boasts just a little scratch to keep everything from reading as too slick. There’s a lot of back and forth on the page between our main cast, not to mention the characters who pop in and out, and Franquiz adds such precise detail it’d be a shame to cover any of it. Campbell’s expert placement makes the volume we need to read feel almost effortless, and we’re never hunting for where to turn next or struggling with over-stylized text. The Landlady’s font is appropriately spooky but stays readable, and the filled balloons are distinct from the rest of the dialogue. The baker’s scratchy dialogue evokes the ululating ghostliness we’d see in a classic serial, which cements the humor and threat of that character on the page.

Overall, “Proctor Valley Road” has a lot going for it as a period horror piece, and Child, Morrison, Franquiz, Bonvillain and Campbell gel as a creative team. The book goes hard on a unified aesthetic, precise cartooning, subtle color details and excellent lettering. Where we could stand to slow down is in the scripting itself, and it will be interesting to see where we go with the four-issue lore dump: into acid-trip insanity, or something a little more coherent and disturbing? Either way it’ll be a fun jaunt with relatable characters, even if we do need a second to catch our breaths.

Final Verdict: 7/10 – “Proctor Valley Road” #4 delights with more spiritual scramble, but could use a narrative pause before we swing into another action-packed issue.