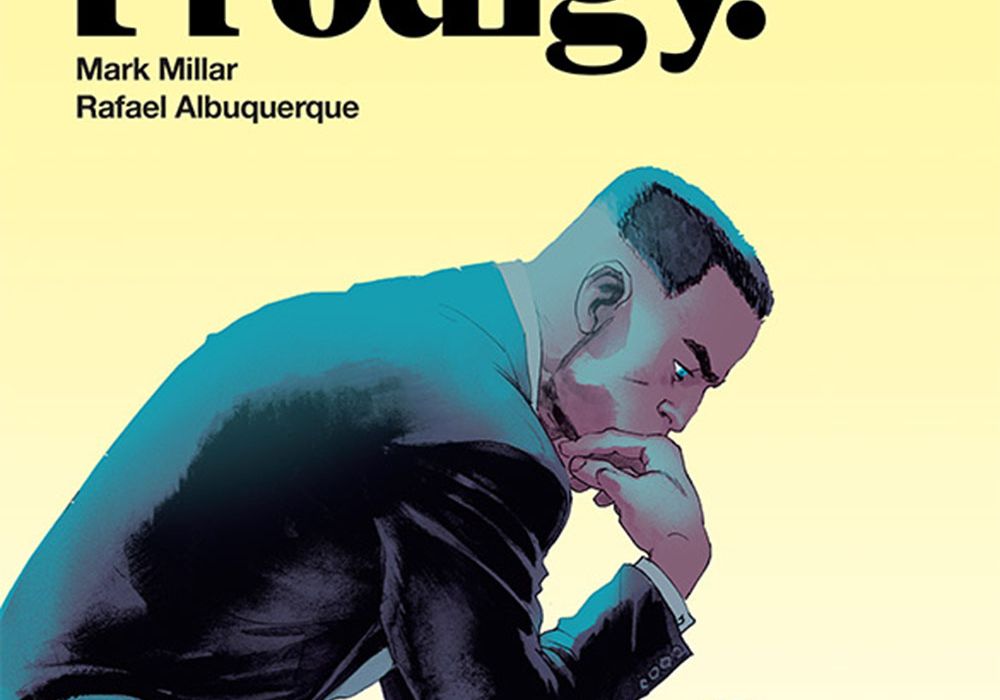 “Prodigy” #1 defies genre classification by design. It has elements of espionage, science fiction, mystery, adventure, and drama in equal portions, doled out with gusto by series creators Mark Millar and Rafael Albuquerque. 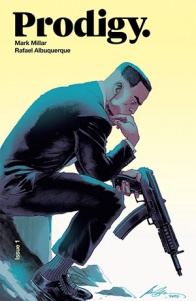 Edison Crane’s not content being the world’s smartest man and most successful businessman-his brilliant mind needs to be constantly challenged. He’s a Nobel Prize-winning scientist, genius composer, Olympic athlete, an expert in the occult, and now international governments are calling on him to fix problems they just can’t handle.

Before even opening to the first page of Millar and Albuquerque’s “Prodigy” there are two significant things to note about the striking cover. One is the obvious allusion to the 19th-century sculpture, The Thinker, by August Rodin. Like other classically-inspired art, the creation by Rodin has been so often mimicked and appropriated for pop culture references that it’s significance has become lessened, a shorthand for serious contemplation. Shortly after Rodin’s death The Thinker was even considered passé or a cliché by a widening circle of art critics. But there is another element to the original sculpture that, intentional or not, puts an interesting wrinkle on Millar and Albuquerque’s new mini-series. The Thinker was originally designed as a component to a larger bas relief piece called The Gates of Hell, intended to represent Dante’s Divine Comedy. Scholars disagree on who The Thinker is intended to represent in the larger piece, but what we cannot disagree on within the context of “Prodigy” #1’s cover is that contemplation and reflection are well and good, but if you’re going to hang out on hell’s doorstep, you better bring a big gun.

Perhaps a more subtle point is made by the period at the end of the series title logo. Edison Crane, the series protagonist, is preternaturally gifted in the tradition of the great renaissance men of Western literature, but the creators of “Prodigy” are cheeky enough not only to call him a prodigy, a title typically reserved for younger polymaths—and right from the start, the moniker is apt, but also to put that period at the end. If Hal Jordan is THE Green Lantern. Edison Crane is THE prodigy. Full stop.

While Crane’s gifts strain even the liberal bounds of comic book believability, Millar rushes through Crane’s curriculum vitae of intellectual and physical accomplishments with a kind of devil-may-care bravado. When Crane takes to a motorcycle to leap a chasm while engulfed in flames at the request of a young fan, you could almost say Millar is approaching his new series in the same way, daring readers to doubt that they can suspend disbelief enough for Millar and company to pull off this story involving a man so gifted that performing open heart surgery on a friend as a preteen is plausible. At times, the breakneck pacing of the issue is to its detriment, hurtling from vignette to vignette and flashback to flashback with a fevered urgency that leaves little time for what appears to be the central mystery of the series—one involving a parallel dimension, otherworldly technology, and very familiar-looking invading aliens—room to breathe. At least we have narration boxes to help keep track of Crane’s whereabouts. It would be impossible otherwise.

If the genre-defying book has a genre, it is one of unbridled escapism, and while Crane is a unique creation, it’s as if the genetic code of Tony Stark, Mr. Terrific, Reed Richards, Evel Kneival, Sherlock Holmes, Doogie Howser (that’s right), and James Bond were spliced together with each character’s deficiencies engineered out of existence. There’s no hardscrabble upbringing either. No girl problems. No financial worries. The only things that really hint at something more relatable in Crane’s life are being targeted by bullies for his exceptionalism on the polo field (we’ve all been there, right?), and his father’s disapproval of how the young man spends his time when he is being groomed for “something important.” As a result, even for all his prodigious talents, the adult Crane ironically comes across as a one-note character in this first issue. At this point, vanity may be his only real and relatable flaw, and it might make the character a bit too inscrutable for some tastes. Time will tell if this characterization has legs. Not being able to relate to James Bond’s exploits hasn’t made him any less of an enduring character. There’s still time for Edison Crane to be humanized over the balance of the series, but if he’s not, one has a sense that it’s likely of little real concern for the creators and ultimately the readers.

Where there is definitely no cause for concern is in the artwork for this series. Albuquerque and his colorist Marcelo Maiolo are a killer tandem. Maiolo’s coloring gives the linework a warm depth that is both modern and nostalgic, softening Albuquerque’s scratchy speed lines and background brushstrokes and giving real dimension to Albuquerque’s impeccable cartooning. The figure drawing and page compositions in this first issue are spellbinding and force readers to pull back the reins in the fast-paced storytelling to better appreciate the visual splendor, and Albuquerque’s gift for adding drama through perspective is on full display. The issue is a visual tour de force, and would get a full recommendation on those merits alone.

All in all, “Prodigy” is a wonderful, whiz-bang kickoff to another Millar series. It should come as no surprise from these creators even if readers’ minds wander to how such a globetrotting series could be adapted to television, a reasonable musing based on Millar’s deal with Netflix. In case readers didn’t think about it while reading, the streaming giant’s logo is emblazoned on the back cover as a reminder. It seems a pity that a series that starts as promising as this one can’t be allowed to just exist on its own merit instead of as fodder for another medium, but if readers have allowed themselves to suspend disbelief this much already, pretending that “Prodigy,” the comic book (and as it exists in this first issue as a representation of a successful collaboration of creators working at the top of their respective crafts) is all it will ever be shouldn’t be a stretch either.

Final Verdict: 8.5 – “Prodigy” #1 introduces a character and sets up a premise that is perfect for comic book storytelling, a medium that is very forgiving of the relatively minor flaws this book possesses.