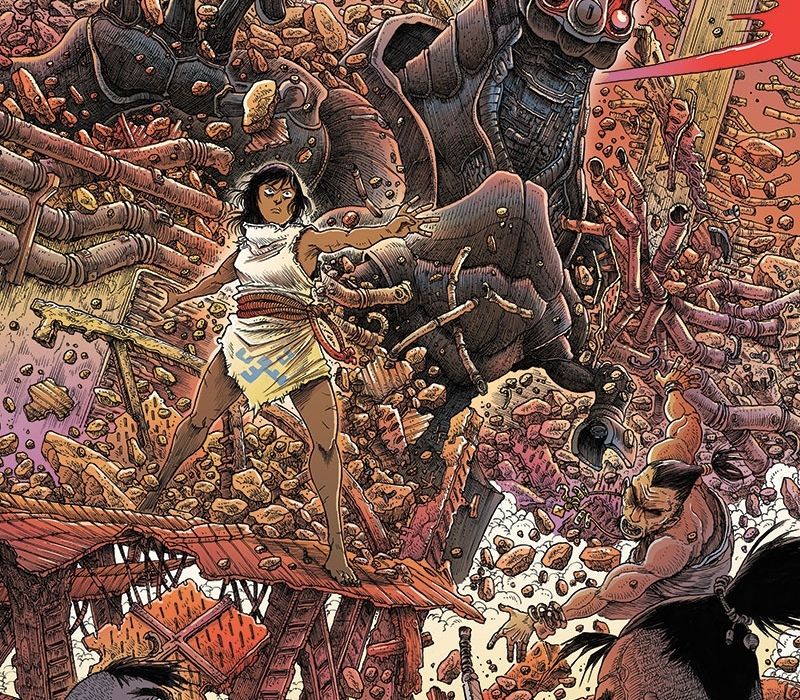 Sometimes, a series creeps past your attention and manages to snag it completely and unquestionably. The announcement of “Protector” #1 did that to me. With such a stellar creative team on board, featuring but not exclusive to one of my favorite sci-fi comics workers Simon Roy and killer cartoonist Artyom Trakhanov, as well as giant inhuman-looking mechs on the cover, it would’ve been hard for me not to get this. Let’s dive in and see how this holds up to my hype. 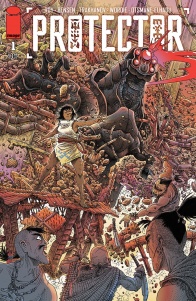 From SIMON ROY (Prophet), Sideways Award-winning author DANIEL M. BENSEN (Junction), ARTYOM TRAKHANOV, JASON WORDIE (GOD COUNTRY), and HASSAN OTSMANE-ELHAOU (Red Sonja) comes a sci-fi adventure equal parts Conan the Barbarian, Mad Max, and The Expanse. Of all the tribes that dwell in the hot ruins of far-future North America, the Hudsoni reign supreme, but even they fear and obey the godlike Devas. When the Devas warn of an old-world demon in the conquered city of Shikka-Go, Hudsoni war chief First Knife decides to deal with the threat personally.

I always appreciate when this type of high-concept sci-fi narrative doesn’t overreach and try to explain itself. “Protector” doesn’t hold your hand from the get-go and I really appreciate being dropped in the deep end here to experience everything first hand. Roy and Bensen start the narrative off with characters who have strong protagonistic voices and for a while, we might be inclined to follow them, but they cleverly switch things up to show these folks are hunting the actual protagonist, Mari, who is also their slave. Unfortunately, in this first issue, Mari doesn’t have any dialogue and doesn’t feel like too much more than just a focal character for the wider world. But it’s that fact that also makes the issue so exciting. Having Mari stumble upon ancient ruins and mechs and just be speechless is a great way to engage and invest readers in the narrative.

After the initial setup with Mari, we get a sequence that really shows how well thought out this narrative is, as well as the influences that trickle through endearingly. I had my suspicions with seeing Mari visit the mechs, but by seeing a small village being oppressed by humans styling themselves as god-like figures, I could instantly see the Nausicaä of the Valley of the Wind influence here and I loved it. Not only that but Roy and Bensen also play with some of my favorite character archetypes in this second half of the book, the main one being the disgruntled, elderly soldier who has to stand up and fight for what he believes in. We know very little about Gosherd other than the fact that he’s the ‘First Knife’, but what we do know is that when he learns about the Devas threatening to burn area that his people occupies, he will speak up against them and find a better way to appease both sides. The way that the village reluctantly reacts to his speaking makes him feel like a well-rounded character too, especially as it means he will be at odds with our protagonist, Mari.

As intriguing as the dialogue and the written narrative is, the art is what really sings in “Protector” #1 and tells a magnificent story. Trakhanov has an incredibly distinctive visual style that right from the start helps to make this book stand out. On the very first page, we get our two antagonistic characters standing attired with clothing that feels like scraps of both European and Asian influence, with one character bearing a loose, white cotton collared shirt with a conical straw sugegasa hat hanging from his neck. Everything else on the page looks attractive too, from the loosely textured leaves covering the alcove that shades them, to the bubbly and pleasantly textured clouds. Having the page be quite visually busy without always drawing the focal point away from where it should be is a comic art aesthetic that has come back into favor these last few years and with good reason: it makes for great storytelling, especially here.

Then we get the whole sequence with Mari, which is a gorgeous example of primarily visual storytelling. As soon as we first see her, we get so much being suggested just from the way she runs, which is barefoot and physically exerting, already pushing that malnourished slave ideal. All around her, we get some serious worldbuilding that rewards close attention. There are decaying buildings, weird alien-looking constructs floating in the air, and great abysses with bits and pieces of skyscrapers and cityscapes that stick out from the walls in odd and interesting shapes. Then we get to the scene of Mari stumbling upon the mechas, which absolutely sings. The more line-heavy art in this section suggests Nausicaä and manga aesthetics and works super well, especially with how the mechs themselves have been overgrown and almost become part of the natural environment around them. Having Mari reveal the “NATO” logo on them is also a great reveal for her and the readers, as we see they were a part of something much more human than we might have suspected.

Jason Wordie does some killer work in this issue with coloring, jumping from different gorgeous palettes that both blend and contrast well with each other. We’re cleverly set up at the beginning with lots of browns and oranges to think that this will conform to the usual post-apocalyptic trappings. So, when we do get to the scene of Mari discovering the mechs, which is filled with greens and teals mixed with rusty shading, the book instantly becomes more interesting and vibrant. The second sequence is also where Wordie’s colors really stick out nicely. The way that the Devas pop with an uncomfortably faux golden glow suggests that there is something sinister about them, especially against the muted blue backgrounds. The final page, however, is one of my favorites: there’s something about those candy-like oranges and blues hitting each other that looks so visually stunning and makes the sequence look truly unique, especially to make the culture of the Hudsoni look visually distinctive.

“Protector” #1 might be yet another new Image release with a great concept and plenty of star quality, but the contents of this issue make it really stand out as unique and worthy of your time. Roy and Benson create an exciting and interesting future Earth, with great characters and ideas spinning through them. Trakhanov and Wordie also bring it to a vivid and exciting life, pulling influence from other titanic sci-fi stories gone by and making them distinctly their own. I can’t wait to see where this one goes.

Final Score: 9.0 – A visually stunning and complexly layered debut, “Protector” #1 is undoubtedly worth your investment.