Valiant has been bringing some of their most important characters from the original incarnation of the publisher to tell new stories. This week, they are bringing back the “Psi-Lords” property. The previous team of characters was centered around nanites, featuring heroes who were related to the H.A.R.D. Corps. characters. However, Valiant has promised a new direction for the “Psi-Lords” #1 in the modern Valiant Universe. The creative team features writing from Valiant staple Fred Van Lente with art from Valiant creator Renato Guedes. Will this new take on “Psi-Lords” manage to captivate modern audiences? 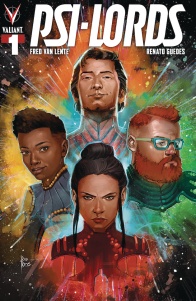 Who are the cosmic beings known only as the Psi-Lords? And how will they change the course of the Universe in this brand-new ongoing series?
Four astronauts awake in an otherworldly prison with no memory of how they got there! What is their connection to the Psi-Lords? And how will they escape?
Fred Van Lente is crafting a lively sci-fi mystery, and Renato Guedes’ art is (literally) out of this world.

Valiant’s “Psi-Lords” is an ambitious direction to use in re-introducing a new team. The series places the “Psi-Lords” in a prison known as the Gyre, depicting the new team struggling to escape. The issue chronicles the team’s breakout and introduces readers to the cast members and their powers. The issue has an amorphous, distorted direction that doesn’t evoke emotion. Author Fred Van Lente crafts a script with lots of dialogue boxes early on. These moments introduce other factors of the series but don’t allow for readers to become invested in the characters.

Renato Guedes draws strong figures with obtuse backgrounds. Some of the detail in the backgrounds of the space ships in the issue is lacking. The other factor holding Guedes back are the stiff poses from his characters. Guedes draws beautifully composed pages but does not flesh out the expressions from the cast. There are lots of panels where characters are seemingly restricting themselves from showing off the emotion they are feeling. It is almost as if we are watching the moment after or before the character is finishing emoting. The art doesn’t show emotion in certain places and makes the material come off as cold to the reader. Fans are trying to find a way to connect with the narrative since it is so elusive from a scripting perspective.

While there are certain pages that pack a lot of detail, the washed-out hues of the art give an obtuse comic a confusing visual direction. With the script already experiencing difficulty fleshing out some of the emotion, it is disappointing to see the figures staring off into space throughout the issue. When Guedes depicts the individuals using their powers, the pages feel a lot more varied with the coloring on the odd energy streams. When Guedes implements the auras of all the characters on the page, the issue shows off how versatile the art can get.

This title accomplishes a lot right out of the gate, but Fred Van Lente’s script isn’t able to make the comic book feel earned. The team is rushed together in the scope of one issue after having come into contact with each other for an extremely limited amount of time. If Van Lente was looking to take on that much plot for one issue, he should have done it across a larger stretch of time to make the narrative feel somewhat convincing. Readers are going to need to spend a lot more time with these characters because there isn’t a strong connection between them yet. Based on some of the designs and powers for the different characters, it appears that Van Lente is looking to introduce a stronger team dynamic in the story. I hope futures will start to differentiate the cast and craft more of a unique perspective for the cast members.

The sci-fi ideas and more stripped-back nature of the plot could help or harm the series going forward. Based off one issue alone, it is extremely difficult to make a final judgment. While there is nothing technically wrong with the plot, I was hoping to be more emotionally invested at the end of the issue for a new group of heroes coming together. While I can appreciate that Van Lente wants to keep secrets from other members of the cast, the tile has a difficult job in finding one cohesive idea to stay focused with.

Despite the ambition of the narrative, “Psi-Lords” #1 isn’t able to craft anything rivaling Marvel’s merry mutants. The ambitious superhero script is full of boring protagonists and confusing artwork. Lente’s underwhelming characterization and heavy narration start the issue off on the wrong foot early on. There are a few inspired moments of violence and creative science fiction ideas, but there isn’t enough of these moments to keep the issue captivating all the way through. “Psi-Lords” #1 has a lot of unique ideas but struggles in communicating them to readers effectively. The disembodied narration in the opening pages is enough to scare new readers off early on. The script carries a confusing cliffhanger that may not be enough to direct readers to the next installment of the book. Van Lente and Guedes need to show readers why the Gyre is a captivating location for a superhero prison break.

Final Verdict: 5.3 – The confusing script and artwork in “Psi-Lords” #1 start readers off on the wrong foot.