I’ll be blunt with you guys: Marvel’s 2099 stories have never quite been my cup of tea. The overall aesthetic is cool, but derivative and each character feel very much of its time in my least favorite ways. Now, Marvel has pulled this oft-forgotten future back into relevance due to some story beats over in “Amazing Spider-Man”, but now we have some fresh, more contemporary takes on what these futuristic characters can be. Let’s see how “Punisher 2099” fares in this update. 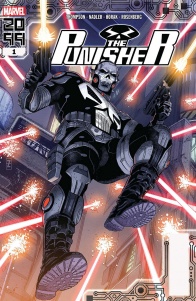 The future has arrived, but world peace certainly hasn’t! In fact, with the streets of Nueva York more crime-ridden than ever, who will rise up to defend the vulnerable population from the corruption? Looks like it’s up to Punisher 2099 to clean up the block – the only question is, who’s behind the mask? Don’t miss out on your glimpse into the future from rising stars, LONNIE NADLER & ZAC THOMPSON (AGE OF X-MEN, GUARDIANS OF THE GALAXY ANNUAL)!

The first thing you’ll want to know about “Punisher 2099” is that it is not for the uninitiated, and further, the impatient. It takes the thing that I appreciate most about 2099 comics (all the cyberpunk-themed, alienesque language, concepts, and jargon) and makes them boring by having them too-thoroughly explained over the course of this issue. On the second page, we get a little aside about a portable surveillance drone called ‘the Iris’ which already bogs the pacing down. Even more annoying, this description is made unnecessary by the next page showing us our protagonist Hector hacking into police archives, which would have been more than enough description to justify the first scene. However, we then get a fellow officer overexplaining the moral implications of hacking followed by him telling the audience his own weirdly Punisher-adjacent origin story. It turns out this guy is Jake Gallows, the original Punisher 2099, but he has no relevance to this story save for a cameo. The fact that this type of storytelling continues to be present through the whole issue leaves a bad taste in my mouth and left me wanting to put the book down multiple times to do something else.

The thing is that this book does have some pretty neat ideas and concepts hidden under this. We get a sense of this when Hector chases down the rogue street-cleaning robot close to halfway through the issue. The robot talks, and talks about how society has trapped itself in a capitalist, consumerist society, begging readers to ask just what the deal is. In the following sequence, we get maybe the best moment of the book where the robot turns out to have human memories, which we see just as Hector shuts it down and it lets out a tragic, slowed half-human half-machine final gasp. This struggle also shows Hector at his most interesting as he rebels against his superior’s orders to track the rogue machine down. We also get a super interesting look at the Thor cult later as they construct their own World Tree out of dismembered human limbs to attract their wayward messiah. It’s that kind of bizarre, dystopian concept that I want to see explored, not the intricacies of 2099 technology that ultimately matters little to the story.

Thankfully for this issue’s sake, the team in the art department is picking up the slack. Matt Horak and Eoin Marron work hard in this issue because they do what should be done in any cyberpunk/sci-fi comic, 2099 related or otherwise: to make iconic imagery that will leave lasting impressions on readers. The Punisher 2099 design itself is a fantastic update on the thoroughly 90s original, with a much more integrated skully motif, slicker and compressed pouches (if we couldn’t lose the pouches, this will do) and a creepy, reaper-esque face mask. Then we get to some of the more frequent or background designs. The Police inform works well because, in a dark setting, the red and blues on their shoulders make them look like police sirens. The architecture is posed in delightfully weird ways, like Hector’s own pixelated-looking Sclera Village Apartments. And the World Tree replica? Do you mean the made out of dismembered human body parts that creeps over the middle of a splash page? Brilliant stuff.

Some of the action in this issue is pretty well choreographed too. The opening shot is especially interesting as we see Hector go back and forth through a virtual reality playback of an older video. Horak and Maron cleverly use panel borders to show that he’s not a part of this virtual reality but has a more physical presence, ducking back and forth and in front of panel borders. The rogue robot chase is where the pace starts to pick up a bit. The vertical nature of the fight adds a lot of tension and weight to their chase, especially when we see the robot rushing down a crumbling building or terrifyingly scale the side of one intact. Horak and Marron give Hector a much more flexible, floaty figure, in contrast, having him jump from building windows or speed up a set of stairs gracefully. Even just smaller transitions have a nice sequentiality to them. Hector enters the Vision Archives again later and the shot is set over three panels where Hector dodges his way through a garbage shoot in the middle panel to get in.

Rachelle Rosenberg is the final saving grace for this comic, bringing that classic neon vibrancy that cyberpunk and 2099 specifically are known for. The opening scene has an uneasy green haze throughout it, working thematically as Hector is trying to recall that day and is unsure and uncomfortable with what he finds. Later when Hector and Jake are walking through the Public Eye HQ, we get a section of the building that is set against a cloud-top city, which Rosenberg paints a luminescent, but bright blue, giving us a brighter version of the 2099 universe we’ve rarely seen. During the Thor riot with the World Tree, we get some really nice aggressive reds and oranges, which fit the heated tone of the battle super well. Rosenberg is hitting us with a diverse palette and it’s super lovely.

“Punisher 2099” is an interesting comic, but gets too bogged down in exposition and pacing issue to really be called a success. The character is interesting if a little derivative, the good concepts don’t have enough space to stretch, but the art time nail this futuristic setting with a slicker, 21st century take on it with plenty of luscious, neon palettes to stick out. If nothing else, come check out this beautiful visual team.

Final Score: 6.8 – “Punisher 2099” is bogged down narratively, but that doesn’t stop the artists from providing a beautiful issue.