What happens when you loosely utilize a concept that hasn’t been touched in ages, add a character not associated with it, and mix it under the umbrella of a large comic event? Probably a concoction that should not work but, yet, under the right hands… 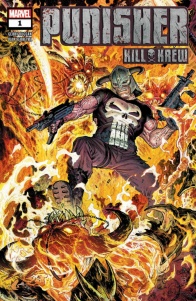 ONE MAN. TEN REALMS. TOTAL WAR. During the War of the Realms, Frank Castle made a promise of vengeance, and Frank Castle keeps his promises. A van full of orphans is about to make that promise a lot more complicated. How does a man kill gods and monsters?

The “Kill Krew” concepts is, to begin with, a bit of a silly romp at Marvel, originally created by Grant Morrison and Mark Millar back in 1995, poking fun at aliens, Skulls, and, yes, mad cow disease. Since then, the term has been expanded to include multiple situations where Marvel characters go after a certain group of invaders, from within world, outer space, or, in this case, other realms. In comes the Punisher and Gerry Duggan with a brand new absurd take on the concept.

As part of the ‘War of the Realms’ event helmed by Jason Aaron, a number of beasts and foes invaded New York, leaving a trail of destruction behind. However, unlike most events, this tie-in actually takes place after everything has been cleared and the new status quo is starting to settle in. Instead, for this mini-series, readers will actually see some of the fall-out of those battles, perceived through the regular denizens of the Marvel Universe, and the one man who vouched revenge on their name.

Before going forward in plot and script, the art by Juan Ferreyra (drawings and colors) was amazing, especially around character design. It comes across clearly that this project was a joy to the artist, as he is flexing every possible muscle in terms of building an unique visual to the colourful characters within. Orcs, trolls, tree-like demons. They all look creatively designed and work together as part of a broader whole. It never strays too much into horror territory, while still retaining the fantastic aesthetics to them.

Having the artist work on colors as well delivered a well-rounded package, especially towards the end of the issue where the landscape changes a bit. Without commenting further to avoid spoilers, the final pages of “Punisher Kill Krew” #1 allows Ferreyra to broaden his color palette considerably and come up with a beautifully filled canvas.

Beyond that, Ferreyra is also spot-on every time the camera zooms in to reinforce character emotions and reactions. This is a story about responding to absurd situations with even more absurd reactions, so the exaggerated facial expression, eyes wide-open, and the always somber look on Frank Castle’s face leads to some great, and often comedic, outcomes.

Talking about that, Duggan has made something truly funny with “Punisher Kill Krew” #1, and yet balanced with the high-octane action the Punisher crowd will expect. What is most special about it is that the comedy timing comes naturally from within the story, not requiring any stand-alone, or gimmick to work: it is entirely built on sharply-written dialogue mashed with the insane situations at hand.

In terms of pacing, Duggan operates on a fast-paced ladder. What starts almost like a done-in-one mission, quickly escalates to something far more encompassing. And then, when readers feel attuned to a specific surrounding and scope, Duggan takes “Punisher Kill Krew” to a whole other level, and one that opens up a lot of doors for the four remaining issues of this mini-series.

Discussing about what most readers will come for their price of admission, the action and explosive violence of “Punisher Kill Krew” is a joy (a bit sadistic one) to behold. In terms of crazy situations, it harkens back to the days of Steve Dillon and Garth Ennis on the main “Punisher” book, where nothing was too extreme or forbidden. The combination of Duggan’s script, locations and situations, combined with Ferreyra’s penchant to display them in a realistic, yet off-kilter, manner really enhanced the action and the comedic elements as well.

When originally advertised, “Punisher Kill Krew” felt like another optional tie-in to a massive event. And while the more cynical can certainly look at it this way, the demented joy, craft, and creativity of all involved speak louder than labels. This is a fun, exciting and, surprisingly, stand-alone series, requiring the bare minimum of exposition to plug readers in that might be unfamiliar with ‘War of the Realms.’ A great surprise that its audience should not miss for the next four issues.

Final Verdict: 8.0 – With a laser-focused aim to its audience, and not afraid to mix comedy with action, Duggan, Ferreyra and team creat something unique with “Punisher Kill Krew” #1 that certainly deserves your attention.