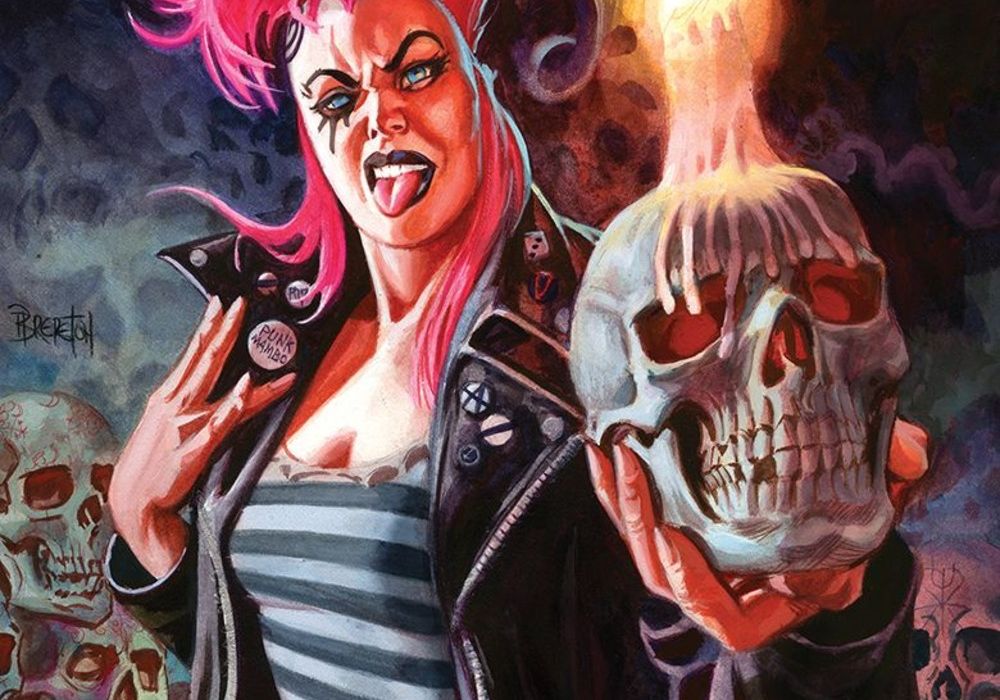 Punk Mambo’s been around since she first appeared in “Shadowman” in December of 2013. But, for the first time, the pink-mohawked, Voodoo-powered Brit-punk is playing a starring role in her own comic. In it, she travels to the heart of Haiti to look into a supernatural incident related to her Voodoo powers. But who can she trust in this place filled with mystery and mysticism? 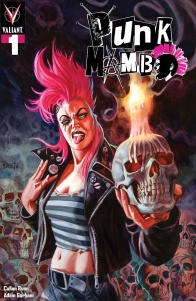 From writer Cullen Bunn (Venom) and artist Adam Gorham (New Mutants: Dead Souls) comes this hilariously horrifying tale. Punk Mambo is a hard-living voodoo priestess who grew up in London, then relocated to Louisiana’s Bayou Country. Now, she’s a mystical mercenary for hire. In her first-ever solo series, Punk Mambo investigates a series of abductions in the New Orleans gutter punk scene, stumbling upon a deadlier mystery that takes her to the haunted shores of Haiti.

First things first: let’s quickly talk about how a white Englishwoman came into possession of Voodoo powers and the cultural appropriation issues that entails. Victoria Greaves-Trott was a punk-rock teenager in London in the ‘70s. A Voodoo priest abducted her and practiced his dark magic on her, but Greaves-Trott learned how to harness that magic and use it for good under the moniker, “Punk Mambo.” So, while a white woman does use powers most commonly tied with the Haitian religion, “Voudou” (and, if you don’t already know, Haitians are traditionally not white), there’s at least a semi-valid reason for her Voodoo power set.

Now that that’s out of the way, let’s talk about the two white dudes writing and illustrating the comic book about the white woman with powers taken from people who serve the loa. Jokes aside, Cullen Bunn and Adam Gorham make a great team and feel well-suited to tell this story. The vast majority of Bunn’s experience is in superhero and horror comics, and this title has elements of both. “Punk Mambo” falls right in Cullen Bunn’s creative sweet spot, and as a result, the storytelling feels effortlessly natural.

Anyone who’s read “New Mutants: Dead Souls” can see how easily Adam Gorham’s talent at drawing supernatural butt-kicking and a counter-culture aesthetic translates to a character like Punk Mambo. Gorham has always shown talent in previous works, but clearly has stepped up his game even more for “Punk Mambo.” You can see it in Punk Mambo’s lovingly lit leather jacket or the extremely detailed and finely inked Haitian landscape.

Gorham also brings a “punk rock” grit and shunning of convention to his art and panel design. Panels are rarely symmetrical, often jutting out at angles. When they are perfectly square or rectangular, it’s often for pacing’s sake, measuring out each moment and building that storytelling cadence. Besides its obvious fit with Punk Mambo as a character, this style choice also makes for highly dynamic battle sequences and dusty, textured environments with personality.

José Villarrubia amplifies that dusty aesthetic with a color palette that feels almost washed-out as if viewed through a fog of war. Punk Mambo’s signature hot pink hair stands out against mundane venues the color of a rainy day, her nuclear-slime-green powers contrasting against it but equally vivid. However, even those feel muted compared to Villarrubia’s use of red, which he often uses to signal power and danger, as well as the obvious bloody violence. As someone who’s colored several Valiant properties, like the first issue of the currently running “Incursion” miniseries, Villarrubia alters palette-specific colors but maintains a similar, foggy look, so each title feels as if it shares an aesthetic unity.

But while the comic title, character name, character and art style all evoke that “punk rock” lifestyle, this isn’t Valiant’s version of SLC Punk but with monsters and magic. There’s a depth to the character, expertly portrayed by Adam Gorham in Greaves-Trott’s emotive facial expressions, as well as Cullen Bunn’s characterization. Punk Mambo might buck convention or politeness, but she’s not the walking middle finger often portrayed by the mass media in relation to punks. There’s a calm confidence to her. She might not be “friendly” in the traditional sense, but there’s a conversational component to her dialogue and narration.

Dave Sharpe portrays that characteristic well, breaking statements up into smaller, interconnected balloons. Strangely, it seems like an uncommon practice; most letterers keep sentences to as few balloons as possible. But there’s a fair amount of dialogue in “Punk Mambo,” and splitting it into smaller chunks helps to make it feel more manageable while helping extend the moment captured by each panel. Plus, bucking the trends is the name of the game for this title – going against the norms is an ongoing theme.

In “Punk Mambo” #1, the titular character spends the first half of the issue fighting monstrous, goblin-like creatures, called the “Grunch.” Sharpe gives these their own font that looks pulled right off an old-school horror film poster. His balloon placement seems more worried about using negative space in the art than leading the eye from panel to panel, but Gorham’s panel layout isn’t too tricky for readers, so that works fine. Within those balloons, he’ll give special treatment to spoken words that are especially loud or shrill, or to dialogue from supernatural characters, which helps keep pages that are dialogue-heavy from feeling sterile. While sound effects are contained entirely within the aforementioned action scene, they’re textured and original onomatopoeia, moving with the object making the sound and textured appropriately for sounds that you imagine before you even realize you’ve read them.

“Punk Mambo” is a superhero comic that breaks all the rules with a smoking, punk rock protagonist who feels uninterested in the trappings of superherodom. Separately steeped in the horror genre but surprisingly energetic and buoyant at times, “Punk Mambo” blazes its own trail, defying any expectation to the contrary. It’s a book that’s difficult to pigeonhole, an ongoing theme which works to its favor. While it may be too early to call it a success for certain, this first issue is a strong first step for the new series. It’s a highly compelling new title from Valiant.

Final Verdict: 7.5 – Like a Voodoo curse, the supernatural mystery and punk rock charm of “Punk Mambo” sets its hooks in you. But, like, in a way you probably won’t die from.