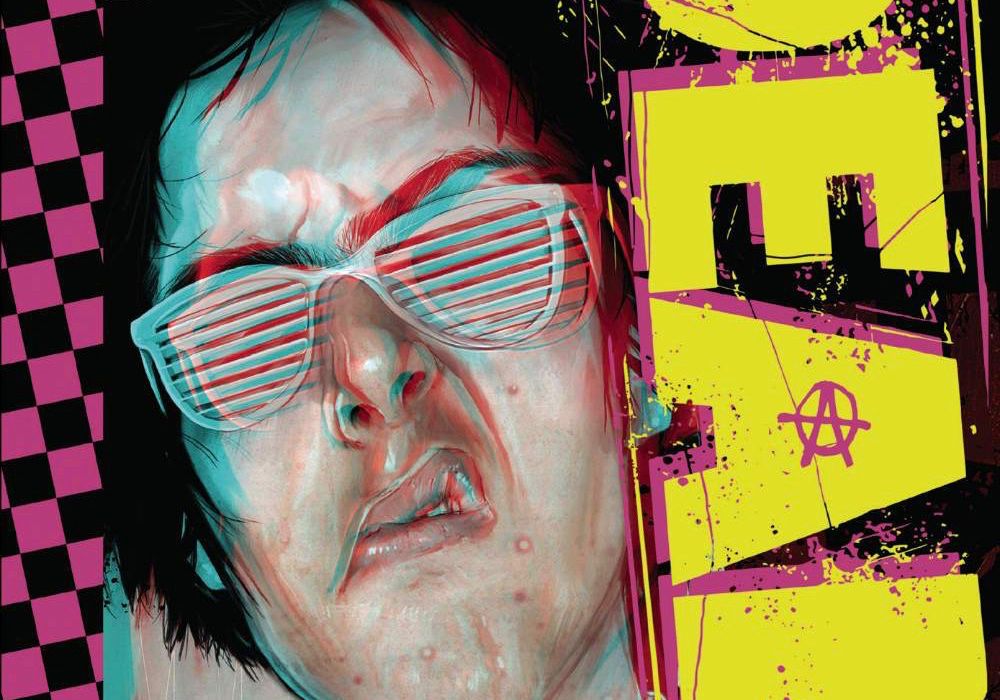 “Punks Not Dead” is finally here, artfully upending your expectations. 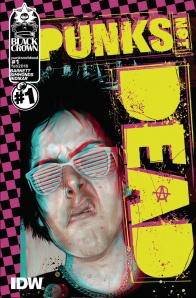 As if being an awkward, bullied 15-year-old isn’t bad enough, “Fergie” Ferguson suddenly discovers he can see dead people. Well, one dead person specifically—the ghost of a certain punk rocker named Sid. Sid’s spirit was trapped in London’s Heathrow Airport for 40 years until the day he met Fergie. Sid’s ghost is now stuck to Fergie—as if Fergie doesn’t have enough on his plate, being raised by a single mum whose idea of parenting is strictly fly-by-the-seat-of-your-pants. Now Fergie has to contend with an unruly ghost sidekick and some weird, uncontrollable new “abilities.” How does the father Fergie never knew fit into this mayhem? And why is the Department for Extra-Usual Affairs showing an interest? Never Mind the Bollocks—all of this plus fish fingers, chunky chips, and endless pints of anarchy in the new monthly series PUNKS NOT DEAD!

Like a frayed Union Jack wildly flapping about on the back of a tattered leather jacket, the punk rock aesthetic is notoriously difficult to pin down. There are certainly many hallmarks that can signify the genre — a dog collar around the neck, chunky shoes, dyed jet black hair and not knowing the first damn thing about how to play your instrument among them — but many of the punk rock icons who ushered in the original scene only really cared about appearing not to care about anything at all.

Thankfully, the creators of “Punks Not Dead” fully understand the punk rock psyche, while not actually adhering to its purposefully sloppy, confrontational, chaotic philosophy. From outstanding design and layouts to innovative paneling to great sounding dialogue, these guys aren’t afraid to care about their craft and show it on every page. I mean, visually this book kicks ass. And the ghost of (maybe?) Sid Vicious slowly materializing between two urinals is about as punk as a single image can be.

Before things even get started, however, there’s a great little essay in the front of the book by writer David Barnett which lays out a truncated but excellent version of rock ‘n’ roll history from a distinctly British perspective. In it, Barnett namechecks the Who and the Mods. It may seem like a minor point, until we meet Dorothy Culpepper, head of the Department of Extra-Usual Affairs, a division of MI5 that appears to focus on all things supernatural. Dorothy is as mod as they come, making her appearance in a fabulous retro pantsuit and boots that perfectly contrast Sid the ghost’s all black anti-fashion. Honestly, I don’t have any inside information, but it certainly suggests to me that there will be some kind of intergenerational epic clash between the older, orderly, almost prim seeming Dorothy and the young, anarchic Sid before everything’s said and done.

In any case, a decidedly Mod aesthetic pops up throughout the book giving things a sense of style otherwise absent from the punk rock scene. It’s a refreshingly unexpected change of pace, as is the book’s incredibly vibrant and expansive color palette. Color flatter Dee Cunniffe seems to utilize every color under the sun, yet it never feels indulgent or overdone. If fact, all of the different colors play off each other really well, with a sudden, well-timed burst of green, neon pink or orange accenting things just right.

In terms of the story line, Barnett throws an awful lot at us. It’s only the first issue, but we meet several key characters and learn their backstories while also having to track some of the unique features and mechanics of this particular world. Barnett balances it all quite well and writes some witty dialogue along the way, but it does tend to feel a bit rushed, with one scene fading into the next without any time to linger. And there’s definitely a lot to digest. I was momentarily lost at least a time or two. In fact, it’s would be a bit problematic – and too lengthy – to even summarize the key plot points, let alone really dig into it all. Suffice it to say that opposing forces seem to be lining up in direct conflict with each other and our misfit teen protagonist Feargal “Fergie” Ferguson is about to be caught in the middle.

In the end, this is the kind of book that will force you to slow down. It’s not a light, breezy read, but it probably shouldn’t be, either. There are some big idea at play, though what exactly they are it’s a bit too early to say. If the backmatter is any indication, even the creators themselves haven’t yet locked things down. Who knows what might come next? And I’m pretty sure that’s a good thing. No self respecting punk would have it any other way.

Final Verdict: 7.4 – Way too early to tell where things might actually go, but a great visual aesthetic and consistently smart writing make for a strong debut.