“Punks Not Dead,” the adventures of punk ghost, Sid, and Fergie, the nerdy boy to whom he gets attached to, continues on issue #2 as the pair starts to get used to living bound to one another. But do a time-displaced punk, an awkward young lad and the twisted agents giving chase provide for some truly original fun? It really does! 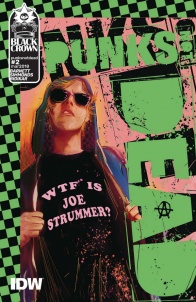 The ghost of dead punk rocker Sid is unlocking some pretty strange abilities in teenage geek Fergie, giving him a taste of power that he never imagined. But will he use it to clean his room, alter the solar system… or pick up girls? Meanwhile MI5’s irascible baller Dorothy Culpepper, and her nervous, new recruit, are drawn to the Extra-Usual Affairs involving a scandalous haunting in Whitechapel in ‘Teenage Kicks,’ Part 2! * PUNKS NOT DEAD is co-created/written by David Barnett (Hinterland, Angelglass) and illustrated by Martin Simmonds (Death Sentence, LIMBO). * A new continuing series from IDW’s Black Crown imprint! * Letter column, interviews, behind-the-panel process pages and more!

“Punks Not Dead” is the type of series one approaches without fully knowing what to get. Is it a supernatural story? A comedic buddy-bromance tale told in London? Or is it about shady government agents with ulterior motives? Turns out that the answer is “all of the above” and, even more importantly, the script by David Barnett juggles those elements in an extremely well-balanced manner.

There is something about Martin Simmonds’s art (drawings and colors) perfectly suited to this book. The overall painting style brings a sense of magic and adds to the whimsical nature of the story but at the same time can be as dirty and cluttered as you would expect from the dark back-alleys of London and its underground pubs. It really speaks of Simmonds’s versatility that each page frames its respective settings so nicely, shifting from schools, posh restaurants to the country’s backside.

Simmonds also experiments quite a bit, relying on panel design, visual aids, and shifting perspectives for some truly unique storytelling choices. In one situation, readers are presented with musical notes spread across the page as characters approach a house, only to discover within it the source of the song they are listening to. In another moment, where Fergie is testing the upwards limits of how far he can be from Sid, a double-page splash presents the not-so-friendly punk ghost as a kite flying high in the sky. And later in the book, when readers discover a new ability that Fergie acquired from his current predicament, the panels explode in a palette of pinks and purples, with the most unusual objects flying in tandem. It makes for a truly trippy visual that certainly adds to what the story is going for.

Getting back to Barnett’s script, the best way to describe is by saying that this is world building done right. A lot of times, readers experience new series where the writer is so eager to present all the interesting ideas they’ve had that it unfortunately suffers from long exposition and forced dialogue. Here, Barnett takes the opposite road: readers only discover what the key characters are learning, with glimpses of the possibilities contained on this world. Not only this is a more compelling way of revealing the canvas, it also increases the curiosity that readers will have to understand it all.

More importantly than pacing, though, the characters are the ones really pushing this issue forward. From lead guys Sid and Fergie, to more ancillary ones like Dorothy and Asif (the agents chasing them from the Department of Extra-Usual Affairs), all characters come across as believable, three-dimensional beings. What Barnett does is to first introduce them in the most obvious, stereotypical way possible, but then adding layers of personalities that catch readers by surprise. Sid is not only the ghost of a punk guy, but also a caring friend for Fergie’s problems. Dorothy is not only a devious agent, but also a senior lady with a very twisted sense of humor. It once again makes readers invested in the story and unsure of what they will get next from its eclectic cast.

Plot-wise, issue #2 adds more nuances to how and why Sid and Fergie are bound together, with the parallels discovered by Dorothy and Asif on their (for now) separate investigation making more pieces fall into place. But it remains far too early to say where the overall arc is going… and the issue is the much better for it. This remains a surprising series, with each page turn revealing a new aspect or layer.

Final Verdict: 7.8 – “Punks Not Dead” #2 brings interesting characters and very well-paced world building together to deliver a story that keeps readers invested and guessing. With a beautiful package on drawings and colors that contribute to the sense of wonder and surprise, this is a series that should keep the audience coming back for more.