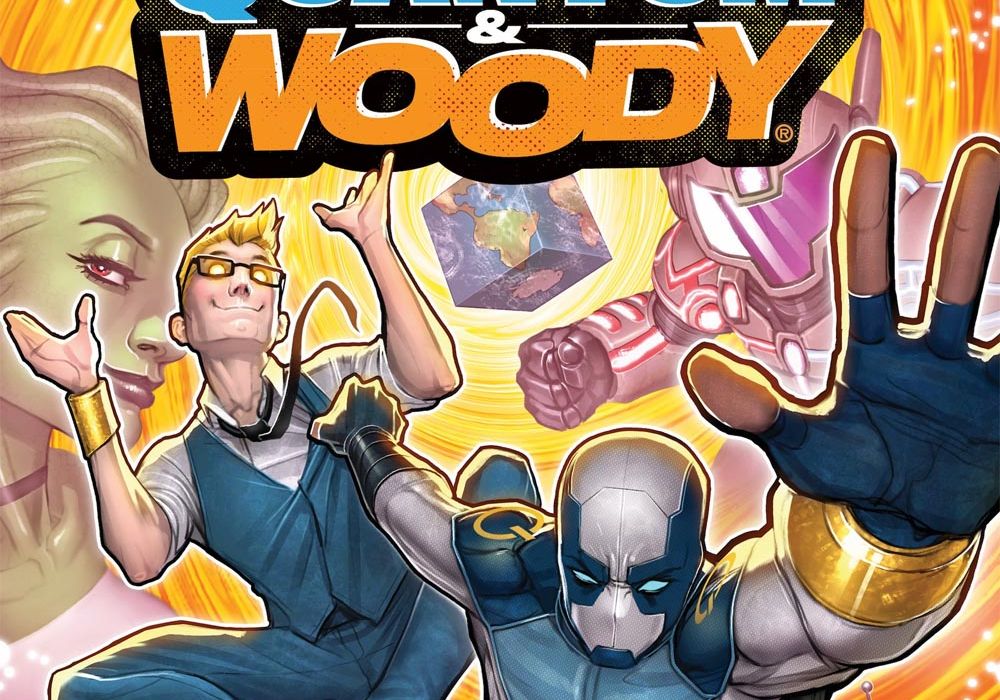 Quantum and Woody is a comic about two brothers. Quantum is a straight laced, up tight, know it all who got perfect grades in school and wants to serve his country as a soldier more than anything else in the world. Woody is a small time crook who never really cared for school, chasing easy money and not really caring who he rips off in the process.

They do not get along.

Unfortunately, both brothers got caught in a freak lab accident that caused their molecules to become unstable. Unfortunately, while the accident gave them super powers, it requires them to remain in close proximity to each other or they will literally cease to exist.

Now these two brothers are the only thing standing between order and a super powered family of psychopaths who want to murder the United States Congress. 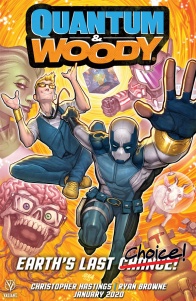 Quantum & Woody — the worst superhero duo in the world — are Earth’s LAST hope against stopping a coalition of mad scientists from destroying the planet!

What’s refreshing about “Quantum and Woody” #1, along with what appears to be Valiant’s overall publishing strategy, is just how accessible it is. Instead of committing to long, drawn out story arcs that are difficult to keep track of and alienate potential new readers, Valiant likes to release limited run story arcs that tie into a broader narrative, but don’t require hours of research and are very easy to track. This a very roundabout way of saying that “Quantum and Woody” #1 is easy for first time readers and a lot of fun.

Writing funny comic books isn’t easy. Timing plays a huge part in making a joke land, and once a comic is in the reader’s hands there is no way for the creator to control the pacing. Fortunately for “Quantum and Woody” #1, writer Chistopher Hastings is very good at writing comedic comic books and his talents are on full display here. Hastings does a very good job of combining many of the fantastical elements of superhero stories with the mundane. The main villains of the story are a seemingly ordinary family that exudes classic Americana, except they living in a flying house and are all super powered psychopaths who kill people for money. Hastings even takes a page from the excellent Squirrel Girl books and has a fake social media page introducing the main characters and their conflict.

Speaking of the main characters, the relationship between Quantum and Woody is the best part of the issue. The straight man/vagabond dichotomy is a great character dynamic that is old as funny stories have existed and these two are a great example of that kind of character pairing done right. As anyone with siblings can attest, family can be tricky and personalities can clash. “Quantum and Woody” #1 does a great job at selling the dynamic between two siblings who have very different life philosophies, but have been living together long enough to understand and anticipate each other, even if they don’t necessarily want to.
Since so much of the comedy in “Quantum and Woody” #1 depends on the reader’s understanding of the character’s emotional condition, the book requires an art style that is able to convey subtle and over the top emotion. Artist Ryan Browne pulls this off very well and there is some fantastic line work on display. While the outlines have some dark and heavy line work it is paired with some very fine detail and shading that gives the art a highly stylized and frenetic look to it. Browne’s art combines with Ruth Redmond’s color work to create a very pretty looking, almost psychedelic feel to the story that looks great in both the quiet and action heavy moments. It’s almost like someone took some of the best elements of modern, mainstream superhero comics and sprinkled in a little bit of 1970’s comix influence into the art. It’s a great aesthetic that compliments the story perfectly and allows the characters and the jokes to shine.

While the writing and artwork are great, the comic does have some problems. Most of the pages have a very high panel count and that, coupled with the frenetic details of the artwork and the rapid fire dialogue of the writing, can make the pages a bit difficult to process. Plus, there are some moments that probably would have benefitted from a bigger panel or being placed on the page turn, which is one of the few tools in a comic creator’s toolbox that allows them to control the pacing of the story. The crowded pages aren’t a deal breaker for the comic, just some lost potential that could have turned a solid comic into a great one.

“Quantum and Woody” #1 is a book that manages to accomplish the incredibly difficult task of making a comic that is legitimately funny and manages to inject the weird and fantastical with the mundane and a character dynamic that is both hilarious and immediately relatable. It’s a great re introduction to one of the worst super hero teams in comics and it will be interesting to see what happens next.

Final Verdict: 8.3- While the book could have probably benefited from not getting lost in a ton of fine detail, it is still well written, well drawn, and immediately hilarious and relatable for anyone who has siblings.