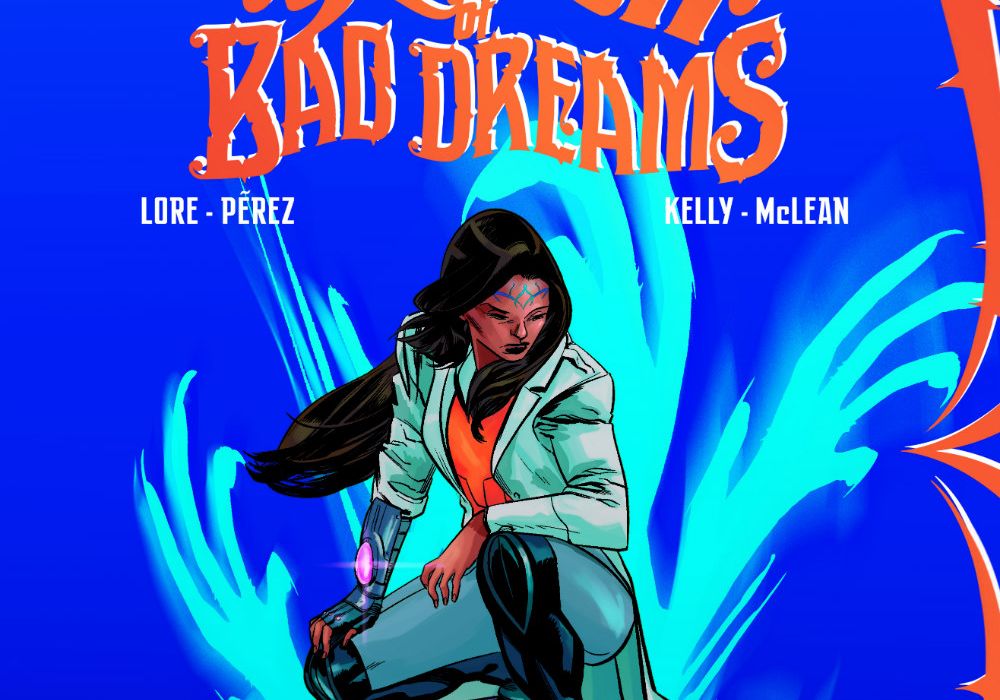 Comics and dreams have intertwined with stories pretty much since the inception of the former. Making them real and dealing with them as a physical substance isn’t necessarily new ground, but in “Queen Of Bad Dreams” #1, Danny Lore, Jordi Perez, and Dearbhla Kelly look to be creating a stylish, sleek new interpretation of this realization for a modern audience. Let’s see how it works out. 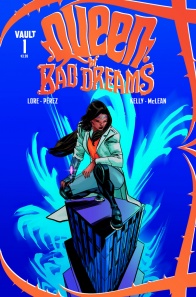 When a dream entity known as a figment emerges from a dreamer’s mind, it’s Daher’s job as an IJ to track them down and make the call: reinsert the figment, or grant them agency in our world. After an especially powerful figment escapes the dreams of an even more powerful politician’s son, Daher is pulled headlong into an investigation that traces all the way back to the incident that sent dreams, even nightmares, spilling into our reality.

Lore has created a super interesting world around this dream agency concept. She’s cleverly avoided over-explaining the rules of the world, choosing instead to throw us in and gently guide us through with simple explanations for occasionally complex ideas. When we open to see Daher, our protagonist, battling against a deranged, wildly scribbled beastie, the narration simply explains that dreams can look like this as the byproduct of a child’s drawing come to life. Then there are some other great concepts looming around like the fantastically named Morphean Annex, the central hub for the Inspector Judges that works in a very office-official kind of way, where interviews are wild psychic looks into a person’s mind to see more about their dreams. And then the idea of the dream figments emerging from dreams to safely live among society, and hanging out in bars called the Pillowfort? It’s a carefully built world that revels in how much fun it is. This is never directly told to me, of course. Lore simply has the talent to be able to let readers experience this culture the way it is and make the concepts interesting enough that we want to figure them out ourselves.

Then there’s our delightful protagonist, Daher. It’s so important that the first scene we see her in is her not just fighting, but fighting strategically. Lore sets her up in this scene to show us that Daher is direct and not afraid of confrontation, but also very aware of figuring out the correct way to approach a situation. Of course, this isn’t always the case, as is told through the use of introducing her ex-wife Viv and the notorious reputation that Inspector Judges have in general with figments living in the real world. This doesn’t make her any worse of a character, of course. Lore cleverly uses these aspects, especially Viv, as a way to show Daher with real, flawed aspects of her personality, balancing the tough, dream-action hero side of her with human believability. And the final scene? (Potential Spoiler!) Having Daher let the figment that she has heavily pursued throughout the issue escape not only opens up a bigger mystery for the coming issues but shoes that Daher is a genuine, empathetic person that makes her own decisions away from her job, too.

Jordi Perez is on fire with her art in this comic. Her style is one that combines light, fast-paced inking with a more clean-lined, stripped back approach that renders this dream-centric fantasy world beautifully. This works great to draw some expressive and emotive characters, not just in Daher but in all that interact with this world. One touch that I love about Daher is that Perez hasn’t made her automatic default emotion a smile. Daher is tough through and through, carrying herself with an air of disappointment or suspicion most of the time. Then we get to the world that Daher interacts with. Her seeming assistant West is a cheerful fellow who keeps up the vibrancy carried on from the fight with the child’s dream concept. He’s happy-go-lucky but shares the cynicism of Daher, which is likely what makes them work so well of each other. Perez paints this well in subtle facial expression and body language, with his facing bearing a constant smirk. When he sits, he also does so with a bored closed fist holding his head up. Daher’s ex-wife, Viv, also bears that disappointed air, but Perez adds a little extra in her body language, making her appear visually larger and looking more aloof and distanced to the petty squabble beneath her.

The setting of “Queen Of Bad Dreams” is a great usage of urban cityscapes, with fun sci-fi/fantasy ideas creeping in. The opening of the series is largely huge, towering office buildings, which support the business-like nature of the Inspector Judges and the Morphean Annex. Perez also includes nice touches like futuristic, purple hover cars, to definitely place you in a future setting if none of the aspects before did so. There’s also a smaller scene when a telepath interviewing Emerson Chase is sketching the details of his suspect’s dreams. Perez illustrates these sketching moments in large, psychedelic bubbles that feel like moments of telepathy appearing around the character. The Figment Shelter is another great setting, which Perez gives the feel of a local, suburban hostel for anyone to crash at. The interiors that Daher interviews a figment in are still futuristic, but they have a more rounded, simplistic feel that makes them more comfortable than the Morphean Annex’s offices. It’s this little attention to detail that makes this issue feel like it has a living, thriving world.

Colors are handled by the inimitable Dearbhla Kelly, who provides this debut with a gorgeous, futuristic vibrancy. The opening sets the tone remarkably well, with Dehan and the figment fighting on a dimly lit, glowing purple city backdrop, where the figment’s chaotic palette and Dehan’s simplistic approach pop fantastically. Kelly uses colors subtly to distinguish humans from figments too, as generally, they’ll have a fantastical or… well, dream-like feel to them. Ava stands out with her immaculate pink hair and matching suit jacket/skirt combo. The aggressive figments at the Shelter are not only brightly colored with primary blues and reds, but they also look shinier than normal humans. These touches add to the brilliant complexity of this series, making the worldbuilding work effectively visually as well as in the narrative.

“Queen Of Bad Dreams” #1 plays with the concept of dreams in a fun, immersive and interesting way. Danny Lore has a powerful protagonist in Dehan, but also a great supporting cast to have her interact with, and shows us how her magical futurist world functions without overusing narration. Jordi Perez and Dearbhla Kelly bring the dream fantasy to surreal life, with great character acting and visual cues that distinguish the real from the fantasy. This is a debut to keep your eyes on.

Final Score: 9.0 – “Queen Of Bad Dreams” #1 takes you for a ride in its compelling world, with diverse, interesting characters and a sleek, dreamy visual production.