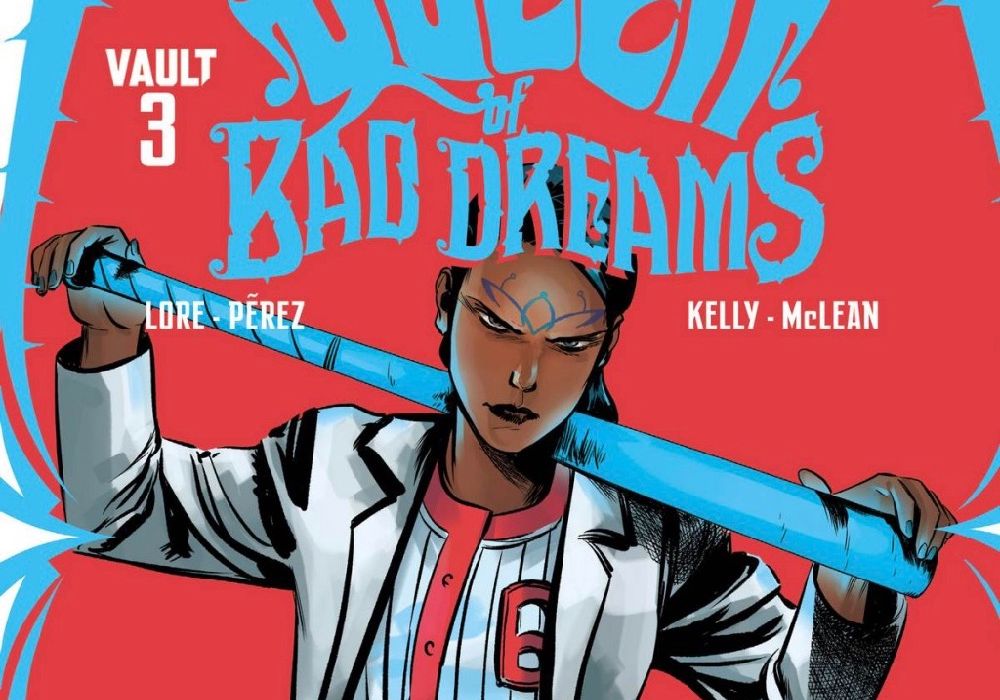 In “Queen of Bad Dreams” #3, Inspector Judge Daher Wei continues to investigate Ava, a figment who came from the dream world, but navigating things in the real world prove to be a bit more complicated and much more compelling. (Warning: may contain minor spoilers.) 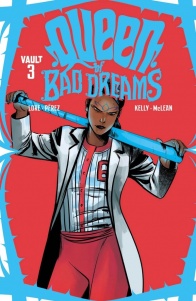 After surviving an attack in her home, Daher decides to take Ava to the safest place she knows –but Viv, Daher’s ex-wife, may have something to say about that. Ava is faced with the reality of normal life, while Daher gets up-close-and-personal with the Chases, and the power they wield in the waking world.

The A cover for “Queen of Bad Dreams” #3 features the lead character, Daher Wei, in a red-and-white pinstripe baseball jersey. In many ways she looks like the professional baseball player she nearly was, in other ways, it’s not even close. A neon blue baseball bat rests on her shoulders, but her body language and stare make it known she’s anything but relaxed. With her intense, downward glare, unflinching eyes and almost spring-loaded stance, she seems ready to lash out at the least provocation. It’s not immediately clear, but after a moment you realize, the baseball bat is a weapon, not a piece of sporting equipment. The long, pale gray overcoat that flows down and around her taut, athletic body merely completes her persona: a tough-as-nails investigator fighting against the system to reveal an uncomfortable truth.

Through the first two issues we learned Daher is what’s known as an Inspector Judge, a technologically augmented psychic who tracks down figments from people’s dreams: physical manifestations of monsters or people who’ve “dropped” into the real world. Daher herself maintains, “Inspector Judges aren’t cops. We’re not correctional officers,” but her ex-wife Viv makes it clear, “. . . for most, ‘cop, but for dreams’ is the exact job description.” Not coincidentally, Viv is a social worker who fights for the rights of figments under the Figment Protection Act. She works at a local shelter where figments seek sanctuary, helping them to acclimate to the strange new world in which they’ve found themselves.

If it sounds like a lot of worldbuilding to absorb and understand, I assure you, it’s not. If it also sounds like an analog or metaphor for refugee crises in the U.S., parts of Europe, and around the world – yeah – it’s definitely that, as well. You’d also be right to guess that the character who says, “Because they’re all mistakes. Every last figment pretending to be a person. Send them back where they belong . . . or terminate them,” is a man named Emerson Chase who attended an exclusive university and belongs to an exclusive country club. The story may be set in a futuristic world, but some things never change. An entitled jerk who was born into power and privilege still feels entitled to say, “In a way, I paid for your schooling,” because his family name is on the university’s library.

No doubt, Emerson Chase’s dialogue must have felt and sounded much edgier and more provocative when it was originally written weeks or months ago, before all the recent comments suggesting that certain elected officials “go back and help fix the totally broken and crime infested places from which they came.” At this point, however, it’s pretty damn hard to compete with – much less top – the increasingly surreal, truth-is-stranger-than-fiction, cartoon villain world in which we find ourselves living. Distressing as it may be, Emerson Chase’s words suddenly sound pretty mainstream. One can easily imagine those who would applaud him for “saying what he feels” and “telling it like it is” even as they gear up for a raucous “send them back!” chant.

In many ways, the dynamic between those with power and privilege and those who dare to question this de facto hierarchy is what drives the overarching story. Underneath all of that, however, lies writer Danny Lore’s wonderfully realized relationships between the four main characters, the real beating heart of “Queen of Bad Dreams” #3.

Strip away the worldbuilding, the high concept political plot and sci-fi accoutrements and what remains is a highly engaging human story full of complexity, tenderness, difficult choices and hard truths. Four people who aren’t so much raging against the machine, but simply trying to get by and do the best they can. In the end, maybe it’s not the story you thought you signed up for – it’s probably better, deeper and more nuanced.

Artistically, illustrator Jordi Pérez, colorist Dearbhla Kelly and letterer Kim McLean do an outstanding job of interweaving the two major real-time narrative threads with occasional flashbacks. Their sense of pacing and visual rhythm feels damn near pitch perfect, seamlessly intercutting between various times and places without ever losing the reader along the way.

In fact, once Daher arrives at the aforementioned country club with her investigative partner West, the pages and panels blend together beautifully in a powerful, organic sequence in which the characters seem to complete each other’s thoughts and answer each other’s questions despite the physical and temporal distance between them. You can feel the tension rise as the parallel scenes unfold, culminating in a fantastic two page spread that delivers the literal knock-out blow. Equally inspired is the way Kelly uses the blue and red of the cover to set up the contrasting cool and warm tones that run throughout the book, mixing in purples and greens to give everything a futuristic, high tech sheen. All in all, it’s a very solid execution of a high concept plot that could easily spiral away from it’s central conceit. Instead, the creators keep it all grounded in the characters and that’s what makes it work.

Final Verdict: 8.6 “Queen of Bad Dreams” #3 is a well crafted change of pace that follows the core characters as they grapple with the real world effects of asymmetrical power and privilege.