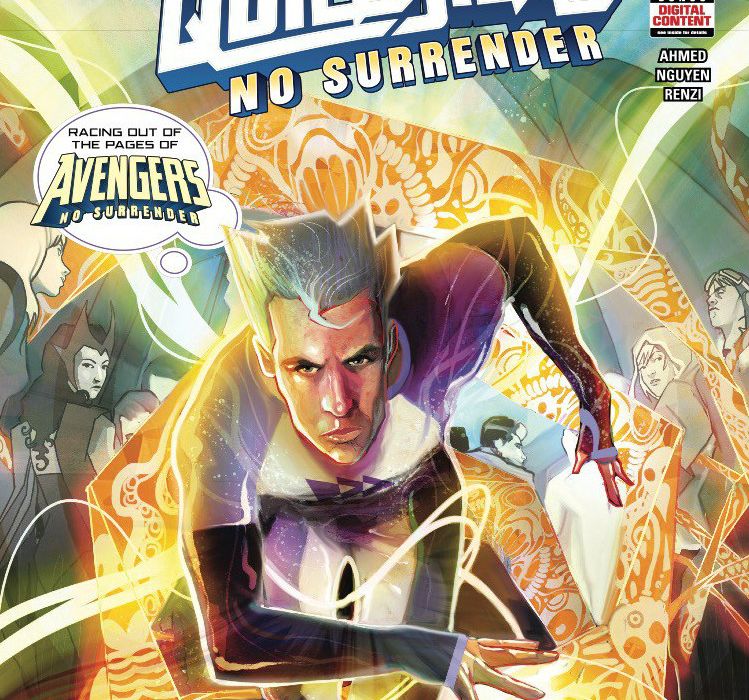 Quicksilver has always stood in the peripheral of the Avengers. With a history that has become fluid between being mutant and not-mutant, son of Magneto and son of a working-class nobody, he’s always been a little complicated and just out of the spotlight. Now, in the wake of the ‘No Surrender’ event, breakout writer Saladin Ahmed and veteran artist Eric Nguyen, along with Rico Renzi and Clayton Cowles, are bringing Pietro back into the spotlight, even away from his sister’s influence. But can he, as a character, stand up on his own? 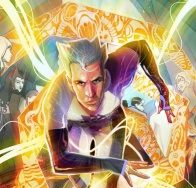 Quicksilver’s super-speed and abrasive personality have always isolated him, but he’s never been truly alone…until now. Trapped beyond the perception of friends, family and allies, Quicksilver wages a one-man guerilla war against a monster that he’s not even sure is real, to save a world that he may never be a part of again. Saladin Ahmed (BLACK BOLT) and Eric Nguyen (OLD MAN LOGAN) team up to bring you a psychedelic survival thriller unlike anything you’ve seen before!

Pietro Maximoff has always been an interesting and complex character. He’s the Avenger that incited the “House of M” event and immediately after tried to save his race by haphazardly using the Terrigen Mists, all the while trying to hold his status as a hero in between. Ahmed understands this, manipulating the story and allowing us to spend some one on one time with Pietro. He’s has always worked with others or with a team, never truly alone save for the events of this issue, where Ahmed has separated him from the regularly-moving world. Think the Quicksilver scene in X-Men: Days Of Future Past, but Pietro is unable to return to the unfrozen world. It does mean that the dialogue is either internal or Pietro externalising his thoughts, but it’s an interesting way to get inside his head. Ahmed shows us that his personality is partly due to his passion for his speed, which is unlike cosmic-level speedsters as only Pietro truly ‘lives’ speed. It’s an interesting rationale for how he sees himself so highly, believing there’s no one who sees the world quite like he does.

It’s commendable how easily Ahmed can slip the readers into the story without having to recount decades of character history, but also without the reader feeling like they’re missing out on anything. This series is titled as a spin-off of the ‘No Surrender’ event but you don’t have to read the title event to enjoy this. What’s interesting is how Ahmed makes passes at moments of Quicksilver’s history with interactions he has with the world around him. It may not be continuity anymore that Pietro is Magneto’s son, but Ahmed still gives Pietro an opportunity to make light of their history by dressing him up as a clown in the frozen world. We then see Pietro do the same with Rogue, who was an Avenger the same time that Pietro was not too long ago, hinting at another story for readers to explore. Ahmed presents this story not only as a deep dive into Pietro’s psyche, but also as a celebration of the Quicksilver character, elevating it to another level.

Something I’m a little more mixed on is the choice and portrayal of the antagonist. Ahmed has created a villain that looks almost exactly like Pietro, except for its energy-like form. It’s a great way for Pietro to project his fears and insecurities about himself onto a physical (or energy-based) form. Pietro states about how he knows it’s trying to kill someone because he’s “done this job long enough to recognize that.” He even says after allegedly defeating it how it feels good to win, representative of a triumph over the worst parts of himself. In this way, it works in tandem with the psycho-analytical sections of interior monologue earlier on in the story. However, we never get anything concrete about the villain, or its origins. It’s hard for us to root for Pietro as we have no idea of what this creature wants to do, as it shows up from nowhere, and never speaks. It’s tricky as I’m sure we’ll find more about it as the series progresses, yet it feels a little vague even for a first issue.

If ever there was a perfect artist for a speedster related book, Eric Nguyen surely must be in the shortlist. Nguyen’s aesthetic exudes hyper-kinetic energy, his Quicksilver appearing lithe and in constant motion. I love how he draws the use of his powers. Most artists feel inclined to mimic the “Flash” effect for super-speed, having a character crackle with electric energy to simulate their power. However, Nguyen opts for a more artful and visually interesting approach, using a smudge of elongated rectangles that feels modern and sleek, working as pop-art in superhero comics. Another method that Nguyen uses to imply speed is the use of blurred imagery. It seems typical, but Nguyen uses it subtly, only having the motion blue overlay arms and legs or lower body, the parts that would likely be in motion. It also creates an effect that looks like the reader is beholding a moment in time where we are only just catching up to Pietro, with half of the figure in motion and only a small part focused and clear. This is clever visual techniques that make Pietro feel unique in a world of characters alike him, a true credit to Nguyen’s visual style.

And then we have the entire frozen world sequence. Nguyen gets a chance to show off his sequential prowess in a scene that seamlessly blends two storytelling paces into one. The environments in this frozen world sequence are extremely clean and detailed, whilst Pietro moving over them is drawn with frenetic penciling and less solid detailing. One of the best side-by-side examples of this is with Pietro taking a selfie with the now clown-faced Magneto. Pietro’s details are less defined, his eyes only highlighted by shadow and the detailing on his body rough edged, whereas Magneto next to him has a clearer, more defined look, with rigid outlining and highly visible facial features. It works well to create a rift between the styles to make the world more immersive and believable. It even adds another layer when the faux-Pietro shows up. Nguyen draws this antagonist with even less focused detail, implying that his speed is potentially on another level to Pietro’s. It ties in well with the ending of the story, wordlessly telling the readers that to take on this threat, Pietro is going to have to push himself harder than he has before.

Rico Renzi’s coloring is an important facet of the storytelling in this issue. The first few pages stand out like clean, vectored pop-art, with a vibrant palette of primary colors and purples and greens. It’s a great way to accentuate the hyper-reality that Pietro sees himself in, with his idea of “living speed”, especially as the mundane is colored with a psychedelic palette: banana yellow sky, blue trees, it all feels candy colored, like how a superhero might see the world. We get some great subtle storytelling in the frozen world sequence, however. There’s not a lot that Renzi can do here, considering the frozen world is a monochrome grey. Renzi plays a lot with Pietro’s speed aura, having it change depending on how fast he appears to be going. It’s predominantly purple for the most part, considering Pietro’s costume, but it seems to infect with a silvery essence that pushes the purple further to the wake of the aura the faster Pietro goes. It’s clever visual storytelling that makes the world more believable with attention to detail.

It’s a high praise when a second-string character can be brought so well to the forefront in their solo series, and “Quicksilver: No Surrender” does just that. Ahmed does a deep dive into his psyche and tactfully references character history without leaving any new readers out. Nguyen and Renzi work seamlessly together to make Pietro’s every move look like a sleek, vibrant vectored artwork. It’s not quite like anything else in Marvel’s publishing, and that makes it even better.