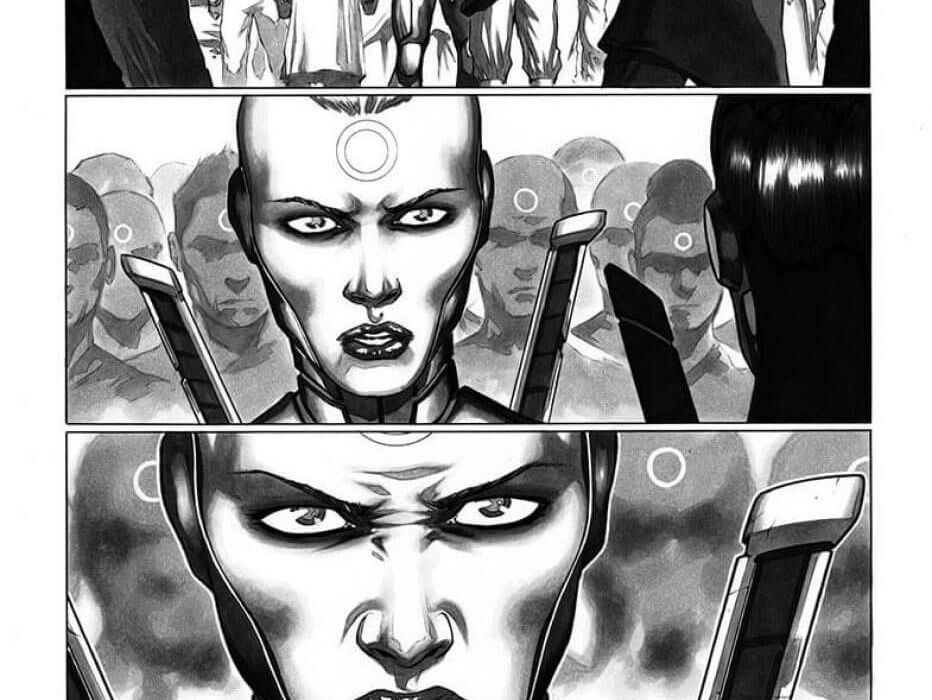 The dive into New Japan’s history leading up to the Fall continues. New issue of Rai means we take a look at a new… well… new Rai? How does this one hold up to the Astro Boy-inspired one from last issue (which, I am ashamed that I didn’t realize that at first!)? Let’s take a look in this mildly spoiler-ish review. 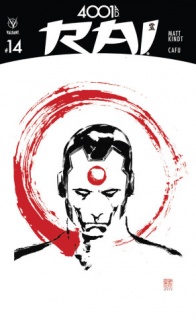 Rocketing out of the pages 4001 A.D, the origin of Rai revealed! For the first time ever, witness the violent foundation of Father’s space-born utopia of New Japan?and, with it, the shocking genesis of the line of guardians that bear the name Rai! Born and bred by Father to enforce peace at any cost, follow the next Rai and their successors across two millennia as they chronicle the history of 4001 A.D. – from the launch of New Japan into orbit to the latest Rai’s crusade to bring it crashing back down to Earth! Valiant mastermind Matt Kindt (4001 A.D.) and visionary artist CAFU (UNITY) bring the 41st century to life with another, all-new jumping-on point revealing the sinister history of Father’s empire?before the dawn of 4001 A.D.!

Trigger Warning: There’s a bit of gore in this issue you might be a bit averse to.

With this issue we come to half-way point of the entire “4001 A.D.” event. After this, we’ll be six down, six to go. There’s a light at the end of this Well-It’s-Alright tunnel. That being said, the “Rai” tie-in issues are seeming to be my favorite parts of this event even if it’s a great deal more about building the history of New Japan rather than having a direct key in the events of the main book. Perhaps it is because it is the one that is marrying world building with character work the best whereas the main series has become much more plot-centric and fast paced and the one-shots have been a mixed bag. Still, it is good to get a tie-in story that doesn’t force you to read the main book to understand what is going on (he says as he glares at “Civil War II” and pretty much every other Marvel event book of the last fifteen or so years).

This issue takes place in the Mid-36th Century and we follow a Rai further down the line from the first one in “Rai #13”. This one is called “Sai”. And I think I’m starting to realize how confusing this is going to get with such a similar name, I honestly would’ve thought it was just a typo but she’s called that several times throughout the issue. Anyways, this Sai is one for the current generation, one that has been able to utilize diplomacy to diffuse hostile situations, such as a Suicide Mob, which is exactly what it sounds like it is. Luckily Sai is able to stop it with words before it reaches the inevitable conclusion, even if it doesn’t have a happy ending. My only one thing is that, outside of this one event, we don’t get to see Sai utilizing her special talents in other successful ways, rather, it is told to us via Father.

Like the last issue, change and how Father responds to it is a big theme in this as the people and Positronics (PTs) of New Japan are becoming more and more hostile, it calls for a new Rai once again, but Sai won’t go down so easily when Father tries to decommission, still believing that she can find a better way than the much more aggressive ones that are to come.

And it’s not just this continuation of Rai we see. We see how the PTs have evolved over the years, gaining much more human qualities. This becomes much more nightmarish because we first see this humanity at an…. Hmmm… “entertainment venue”. And by that I mean a Shooting Range where the crying and scared PTs are the targets of bastard humans trying out antique gun replicas. And we see -crafting in detail by Cafu and Dalhouse- there’s a lot of organic stuff inside PTs. I’m sorry if I seem to be a bit more blunt with this. It’s just in the aftermath of the Orlando shootings, this has just become even more unnerving. Combine that with the mention of “black market coitus globes” it makes the PTs grievances even more justifiable.

The action truly comes to a head when the new Rai emerges, who is pretty much the Anti-Sai. Ruthless and efficient, and it’s where Cafu and especially Dalhouse get to show off a bit. I am really glad to see Dalhouse’s colorings on other books outside of DC, because there his work (especially with Booth who I’ve never really liked as a penciller) always felt like there was a lot of color filters over everything. Here, much less so, and it allows for other aspects to take emphasis. The glow of the new Rai’s electro sword-whip things is more prominent when they’re the only things glowing.

There is something with the end of this issue that, perhaps will be addressed in the latter issues, but as of now leaves me a bit confounded. The new Rai shows up on the scene in is incredibly effective at completing his tasks but by the end of the issue there seems to be a change and the reason for it feels… odd. Like, considering his personality, I don’t fully believe this to be the reason that suddenly this Rai is having second thoughts. It feels a bit forced and really contrary to what we have seen so far. Like I said though, perhaps it can be elaborated on in the next two issues, but as of now it left me scratching my head a bit.

As we reach the halfway mark of this comic event, I have found it interesting, if a bit flawed. As of this mark, I probably rank it on the same scale as the “Book of Death” but don’t think it reaches the highs that “Armors Hunters” or “Harbinger Wars” has. Same thing with this issue: it’s interesting, pretty dark, but there are some flaws.

Final Verdict: 6.9- As Father tightens the chains around New Japan, we learn about two other Rai’s to various effect.