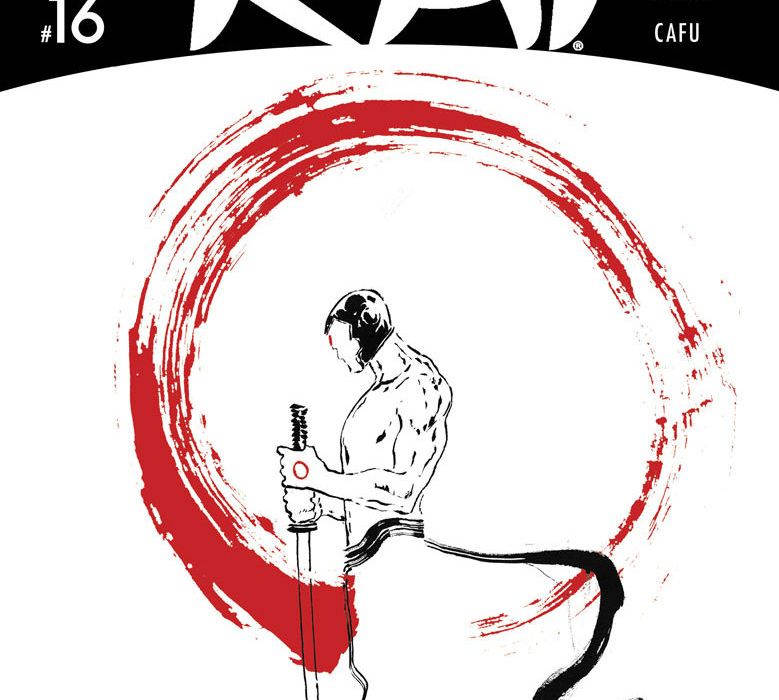 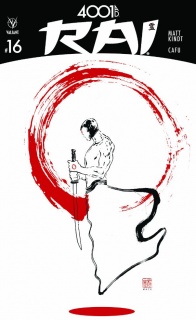 4001 A.D. TIE-IN! Rai locked in fatal combat against?the true protector of New Japan? As New Japan’s current protector, Aboto, slips beyond Father’s control, nothing can stop the unhinged warrior from destroying the orbiting nation from the inside out. To defeat this monster of his own making, Father must create his last and greatest Rai! But when Father’s fallen son and newest champion clash in the the streets of their sovereign nation, what dark information will Aboto bring into the light of day? and how will it fuel the flames of rebellion that await in the year 4001 A.D.? The future as we know it takes its final horrifying shape here as 4001 A.D. mastermind Matt Kindt and fan-favorite artist CAFU reveal the final puzzle piece behind Valiant’s summer blockbuster event!

The “Rai” tie-in arc has had a bit of an up and down. It started strong, but then lulled a great deal. Now, we reach the end of this examination of the history of New Japan’s protectors by having the story that Matt Kindt has brewed for so long reach full circle. Now, Matt Kindt and CAFU “debut” the current Rai at the start of his own path before the first murder in a thousand years began to spell doom for Father’s reign. And while our rai’s story is just beginning, the creative team bring an end to Aboto’s story.

So how does it go? Well, let’s go through it.

We get to see Rai at his conception, in an experiment of fusing the humanity of his mother with Father’s intelligence. It immediately transitions twenty years to Rai fighting a giant spider kaijuu unleashed by the anti-technology Raddies. I won’t lie: this does require some massive suspension of disbelief. Not Rai being able to kill the thing, but, the murder of Rai’s mother was the first murder in New Japan in a millennium, right? And yet, we got this big spider monster rampaging around until Rai gets to have his “Cut Himself Out of the Monster” moment (and it’s not a badly rendered moment from CAFU and Andrew Dalhouse, mind) and no one dies? I suppose it’s the difference between “murder” and “collateral damage” but the way that “Rai” started, it painted a world where to this degree didn’t happen. That everything was so safe and wants and desires were all met outside of occasional spats.

My nit-picks on that aside, it turns out that there is a much greater game at play with the “murders” of several Positronics that Rai investigates him leads him to the inevitable conflict with his predecessor. This is where my big gripe comes in with this conclusion. Not necessarily when I just isolate this one arc, it does feel like a fitting conclusion to Aboto’s reign (in a rushed way, as I’ve mentioned before), but when I look at this arc in the greater context of the “Rai” series as a whole. So, let me get this straight: Rai, as in our Rai, met his predecessor Aboto, the one so disillusioned with Father that he questions the young Rai’s purpose upon meeting and fighting him. This event is happening simultaneously to the Raddies acquiring the body of Rai’s mother in the hope of creating a virus to kill Father, which results in the inevitable murder and the setting stones for “Rai #1”.

Let’s face it, Rai meeting his predecessor is a retcon. That doesn’t automatically make it bad (hell, the Winter Soldier is a massive retcon and one of the best things Marvel ever die). That being said: in my opinion, I feel like Rai meeting Aboto and pretty much spelling out that Father is massive badness really damages Rai’s own journey leading up to the events of “4001 A.D.”. To compare this to Dark Souls (because I must compare everything to Dark Souls, it’s in my contract), this would be like as soon as the Chosen Undead got to Lordran, Darkstalker Kaathe would appear out of nowhere and explain to you what Linking the Fire means.It kind of dampens the protagonist’s journey before the protagonist can even begin his journey. But that’s what happens here, Rai defeats Aboto and then he begins the mission depicted in this first arc, starting the chain of events that would lead to so much chaos and it feels like such an unnecessary addition to the story. You already had Rai go through this journey with Lula, Spylocke, Dr. Silk, and all the others that helped define Rai. This felt… well… cheap.

CAFU and Dalhouse complete their time with “Rai” as they have gone on: real solid work. The above-mentioned fight against the giant spider kaijuu is as gruesome as it is cathartic and while Rai’s fight against some Raddies is expectedly brief, it does show for some good, more grounded, fight depictions. This was the first issue where the art team got to display more of Rai’s technological-based abilities, such as the ability to teleport around New Japan. While it is good (I’ve said before, Dalhouse has a real knack for depicting people and object glowing), the art when it reaches the time of “Rai #1” really highlights just how synonymous this series became with Clayton Crain’s art. The repetitions of scenes from the beginning of the series are serviceable for what the story demands, but fall short when compared to Crain’s more unique style.

I don’t know what the future of the 4001 side of Valiant is. We still have the conclusion to the event next week. That being said, “Rai” has been a rollercoaster, with some great highs and some damning lows. This issue, when looked it in a singular context provides some decent conclusions to one character’s arc, but when looked at from the macro may have done harm.

Final Verdict: 6.5- As decent conclusion to this uneven arc as one could hope for.