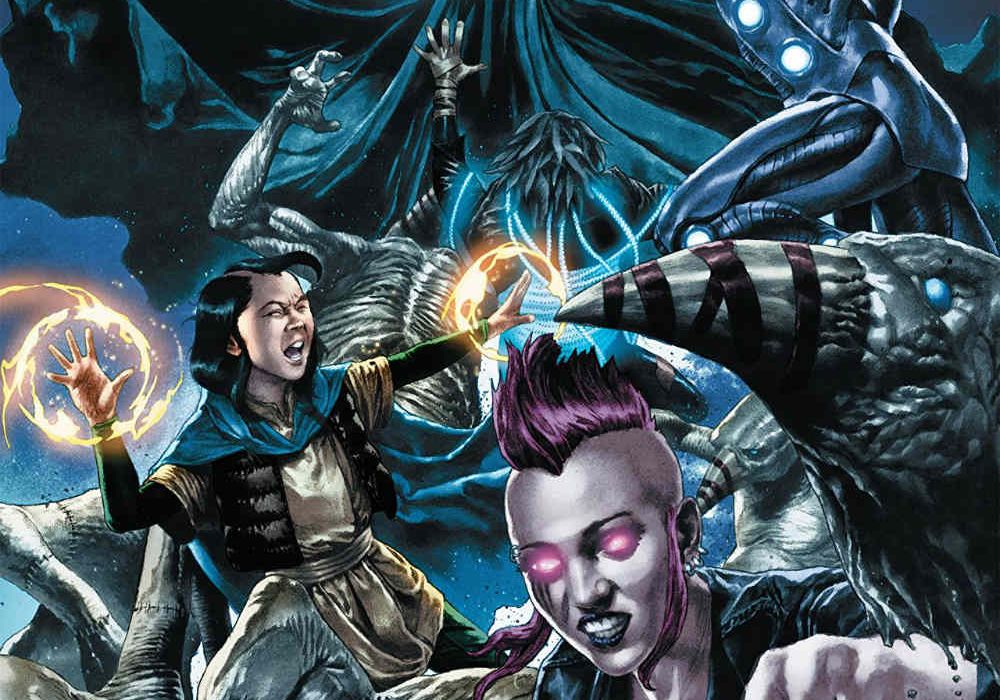 “Rapture” comes to a conclusion and it’s time for Shadowman to make a choice. For the fate of the Earth and Deadside, hopefully it’s the right one. 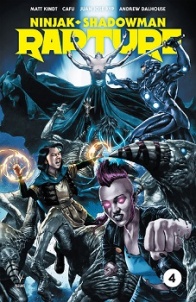 The final battle for life itself has arrived! As Babel makes its last assault on the heavenly realm beyond the Deadside, a band of Earth’s most dangerous heroes – Ninjak, Shadowman, Punk Mambo, and Tama the Geomancer – must halt its eons-old campaign once and for all…or face a global disaster of biblical proportions! Plus, at the center of it all: The undiscovered truth about Shadowman that will change the Valiant Universe forever!

Going into the finale of “Rapture” I was slightly concerned about how things would pay off dramatically in regards to the character of Shadowman. While nothing in “Rapture” #4 is egregious, it ends competently, the manner in which it wraps up is perhaps a little too cute for its own good and exposes some of the thin dramatics in an otherwise entertaining miniseries. Like the dramatics, artistically there is a feeling of inconsistency at times, that make me think of what could’ve been instead of what is.

At the center of “Rapture” is Jack Boniface the current Shadowman, his centrality has been noted several times by both Tama and Babel. For someone of such import you would think we would have gotten a bit more time representing Jack’s inner struggles. Those inner struggles have been commented on several times in previous issue, but never fully brought to light for newer readers until the finale. That scene by itself is effective, but in the larger context feels like a missed opportunity for a more emotional reunion between Bonifaces. The dramatic arc of Shadowman falls into the trap of story world driven entertainment: Kindt assumes too much on the part of the reader.

Valiant is purposefully small and generally does a good job building out connective tissue without it appearing to calcify storytelling potential. Their claim that every new trade is a great jumping on point rings of carnival barking, most of the time they aren’t entirely wrong. Because they emphasize character, their products tend to make a good case for themselves as individuals, where a new reader isn’t lost but a long term one would find nuance and a deeper story. There is an assumption that readers know something of history but that history isn’t the source of value the current product derives from. The true value is derived from the character journeys. And when it comes to Shadowman, Kindt assumes too much built in reader investment. Shadowman is a fairly obscure character, his last solo series was the mini “End Times” in 2014 before reappearing in the third arc of Matt Kindt’s “Ninjak” ‘Operation: Deadside’ in 2016. What “Rapture” needed more of wasn’t statements of his importance but panels exploring  Jack Boniface’s character. “Rapture” told us a lot, but didn’t show us enough.

What Kindt and the art team do show is still affecting, from a certain point of view. I’m a sucker for the surrealist logic of dream sequences and all their permutations. These sequences at their best are all about the journey regardless of physical logic. So, to have Jack confront the source of all his pain, his dead father, in such a sequence is something I’m predisposed to vibe towards. The art team gets some of their best facial expressions here and are able to develop the sense of a bond they always had at their core, even if their history together was less than idealized. Papa Boniface gives his son the pep talk he’s been searching for. By itself it is an effective emotional reunion for the character and reader, because it operates on the premise of Fathers and Sons. It also reads as slightly left of field. For such a well done moment you think it would’ve been setup a bit better. That’s the feeling that describes “Rapture” #4 as a whole good moments, that could just use a bit more connective tissue.

Exacerbating the feeling of a lack in Shadowman’s arc is Tama and the Book of the Geomancer. The time displaced Geomancer scratches the fourth wall several times this issue as she cheer leads Shadowman. This lamp shading, Tama calling out specific moments as ‘the’ moment only reveals their manufactured quality and how un-invested I am. Pointing out the decisive moment doesn’t raise tensions, it just makes readers unnecessarily aware. In that awareness, they begin to think.

This exposure and reaction isn’t created just by dialogue there are presentation issues. As with several moments in this issue, page design by the art team is puzzling. The design of Shadowman already limits emotive potential, but pulling the view out and showing his decision to reach his loa through a series of long shots is ineffective. All these removed perspectives do is emphasize the distance(Jack to loa, reader to Jack), not the struggle (emotionally or physically) the character is going through. This sequence is supposed to be ‘the’ climactic moment of melodrama, showing things from a distance is the opposite of melodrama. When he eventually reaches his loa, both are tiny specs in a sea of torrential waters. If it weren’t for the lettering, they would look like pieces of Babel’s broken tower.

Tama scratching the fourth wall isn’t always a bad idea. Her statements about Jack Boniface and his loa being important to the future acts as textual anchors to the extratextual announcements surrounding the character and miniseries. He is featured in the ICON banner that is supposed to symbolize their focus for 2017. They have already announced, stealthily, a new Shadowman comic for early next year. Of course, Jack Boniface is going to be important to the future, “Rapture” was all about beginning to rehabilitate the character. Instead of making the reader aware, Kindt and company in this instance are reassuring the reader of what they already know. These moments create for the reader a feeling of satisfaction because they’ve been paying attention and get the reference.

Whenever there are three artists listed under “art” and the comic in question doesn’t feature absurd shifts in style there can be a feeling of inconsistency. As previously stated some artistic choices undercut the drama they are meant to represent. There are other moments where paneling seems out of order because of the perspective shifts muddle the overall geography of a scene.

At the same time “Rapture” #4 art team create some plainly entertaining moments. Letter Dave Sharpe following the stretched, ripping apart, body of a loa with an onomatopoeia is hilarious and brutal. The page that follows a loa’s leaping sword strike and its end results are fantastic. This was supposed to be a spectacle those moments deliver even if it serves to expose the lesser ones.

Final Verdict: 6.75 – “Rapture” comes to a satisfying if not spectacular conclusion that fulfills what it set out to do.