World War II had a huge impact on the Hellboy Universe, but the era’s remained largely unexplored for the most part. In “Rasputin: The Voice of the Dragon” Chris Roberson, Mike Mignola, and Christopher Mitten pull back the curtain at last. 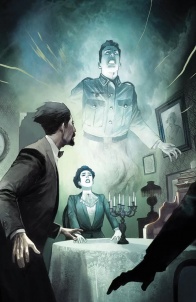 A séance reveals that Bruttenholm’s mission may be more than he bargained for when the stakes become more dangerous but the enemy only more mysterious.

One of the continuing joys of this series is in seeing Trevor Bruttenholm anew. Back when he was first introduced (and subsequently killed) in “Hellboy: Seed of Destruction,” we watched him from the outside as he listened to tape recordings of his own notes on Hellboy’s arrival on Earth and the mysterious monk that called himself Rasputin. Now, twenty-three years later, we’re diving into that first mystery all over again. This book is very much a prequel to both the “Sledgehammer 44” series and the “B.P.R.D.: 1946–1948” books, and it uses that to dramatically contrast the Bruttenholm of 1941 against the Bruttenholm of 1944 and beyond.

In “Rasputin: The Voice of the Dragon,” we’re with a different Trevor than we’ve ever seen before, only twenty-three and with very limited world experience. There’s something amusing about him scoffing at Lady Eden-Jones’s séance, especially knowing that a mere six years later, he’d be telling Jacob Stegner not to scoff in “1947.” In 1941, Trevor is still rather naïve and ignorant. I don’t think he’s going to make it through this story without making at least one big mistake.

As a long-time reader of “Hellboy” and its spinoffs, I found this book particularly satisfying, especially as it ties into the Heliopic Brotherhood of Ra. “Rasputin” stands on a wealth of material from other stories, but I don’t think it does so in a lazy or cheap manner. There’s a nice interplay with each new plot revelation being tied to a character reveal, especially in the case of Trevor’s Uncle Simon—when he talks about the Heliopic Brotherhood of Ra, we learn about how he feels about Trevor in the process. In a very short space of time, I feel like we’ve gotten to know Simon very well. None of this is particularly showy, but it’s effective.

This also gives us new insight into Trevor’s feelings about the Heliopic Brotherhood of Ra and its associated secret societies, like the Osiris Club. After all, in 1943 Trevor went on the Wild Hunt, which apparently had ties to the Osiris Club, and in 1954 he sent Hellboy to the Osiris Club on a quest to slay a dragon. It’s easy to see how Uncle Simon’s view of the HBR will have an affect on a young and impressionable Trevor.

Speaking of the Heliopic Brotherhood of Ra, in case the previous issue didn’t drop enough hints, this issue opens with Rasputin blatantly discussing his goal—to enter the tomb of Eugene Remy (founder of the Heliopic Brotherhood of Ra) and converse with his spirit and learn everything he can about his vision of the Dragon. I gotta say, to me, this sounds like a really fun idea for a story, and Mitten’s teasing panels of the tomb suggest a very moody and fascinating location for the latter half of this story.

I know some readers were hoping to see more of Rasputin in this series, so they’ll likely be disappointed he’s only around for three pages, but I actually prefer him this way. I’m reminded of his role in “Hellboy: Wake the Devil,” where he was the force behind everything, but our heroes never even saw him (well, except for Abe in a vision). I think that’s when Rasputin works best. Plus,this way I don’t think this miniseries is in any danger of diluting the character’s power.

The problem area for this series remains the narration. In this issue it’s mostly used with restraint and for the sake of economy, mainly used to introduce a scene and give the reader some context to character relationships and augment things left unsaid. Honestly, it mostly worked, and it certainly serves a utility, but it’s still a bit too much. It has been something of a problem in Chris Roberson’s other stories, but so far it isn’t bothering me in “Rasputin.” Still, it’s walking a very fine line. To be fair, Roberson can be a bit wordy at times, but it’s a trait that fits with certain characters, such as Sir Edward Grey and, in this case, Trevor Bruttenholm.

The thing is, there were several places where there could have been narration, but Roberson deliberately stepped back and let Christopher Mitten’s artwork carry the story, such as when Trevor breaks into the Mayhew Manor. The narration tells us about the building and its history, but the moment Trevor steps inside, the narration stops. We experience the moment with him, and the sequence is much more effective for it. Plus Mitten is great at locations that seem heavy with history and atmosphere.

Admittedly, I was initially a little annoyed that Trevor encountered a Hollandus Edition of Flamma Reconditus (‘The Secret Flame.’ See “B.P.R.D.: The Universal Machine” for details… it’s a big deal). The book is so rare it’s practically a myth, and it seemed like a bit of fan-service. However, I changed my mind when the manor reclaimed all the knowledge inside. Instead the book became more of a commentary on how close Mayhew (and by extension, the Heliopic Brotherhood of Ra) had come to learning the great secrets of the universal machine. Plus I like how Trevor clearly has some understanding of how valuable the Flamma Reconditus is, and will likely spend at least some of his career as a B.P.R.D. agent and paranormal investigator hunting after a book that’s practically a ghost. He knows it’s real now. I don’t think he’ll easily forget that. (There was even a little description of Shakti, the opposing force to Vril.)

And finally, that last scene… When Trevor is told he’s going to be a spy, I found myself hoping that this story doesn’t end with the fifth issue of “Rasputin: The Voice of the Dragon.” I want to see him go on and have other adventures throughout World War II. So, yeah, I think it’s fair to say I’m enjoying this series. Still, I remember how much I enjoyed “Rise of the Black Flame” and how shaky and truncated the last few pages were. Hopefully “Rasputin” can stick the landing.

Final verdict: 7.5 – “Rasputin: The Voice of the Dragon” draws on a wealth of history. There’s a lot of set-up in this issue, but it’s handled deftly and illustrated beautifully. I could read a lot more of Trevor exploring an old manor if Christopher Mitten was drawing it. 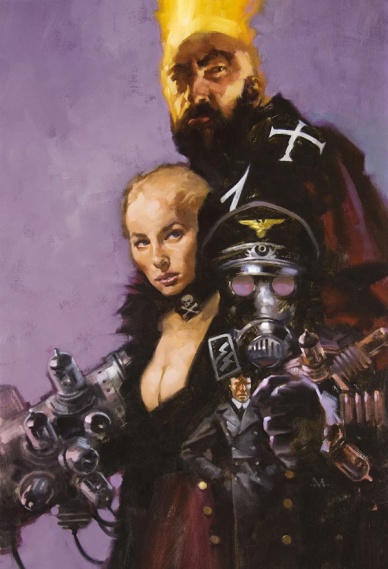