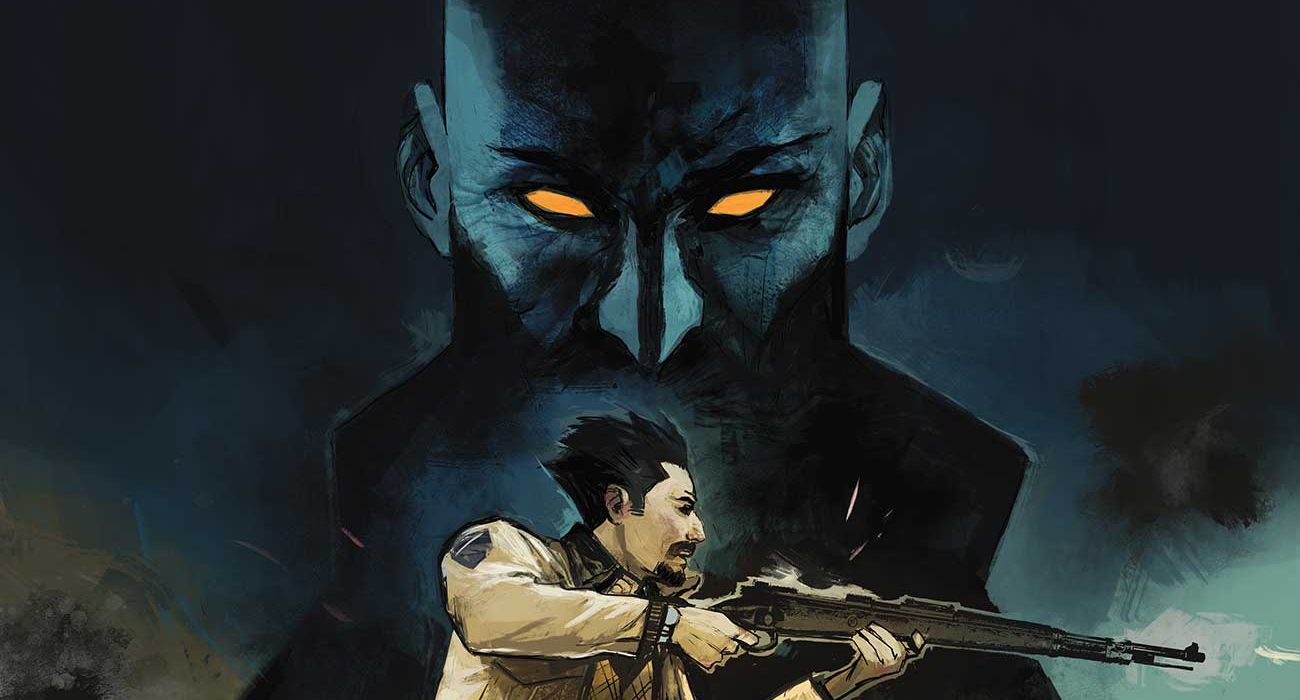 Trevor Bruttenholm gains a rather interesting ally in the latest issue of “Rasputin: The Voice of the Dragon.” 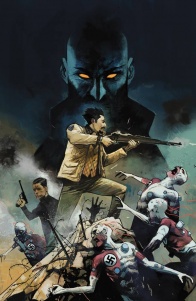 Rasputin’s allies pursue their own goals as Professor Bruttenholm parachutes into Nazi territory in search of “The Master.”

Mark Tweedale: And so begins Trevor Bruttenholm’s career as a spy. It’s rather fascinating to see how in 1941 Bruttenholm is regarded by his superiors as a bit of a kook that may be on to something, and yet by Christmas 1944, he’ll be considered a highly respected expert in his field—‘a paranormal Whiz Kid’ as Sergeant George Whitman would later put it.

But he’s certainly not the first paranormal whiz. There’re many that came before him. Really it shows how much the arrival of Hellboy changed the world. It legitimized the paranormal in a way that authority figures couldn’t deny, but before Hellboy things were very different and that is put into stark contrast this issue with the reintroduction of A.N. Sandhu, eighteen years on from his first appearance back in “Rise of the Black Flame.”

This whole issue really revolves around Sandhu, so it’s very difficult to talk about without spoilers. Consider this your warning. Sandhu was a favorite of mine from “Rise of the Black Flame,” so it’s good to see him again (though the poor guy looks a little worse for wear). Much of this issue is spent catching us up to speed with what’s been happening since we last saw Sandhu, while simultaneously blowing young Bruttenholm’s mind. I’m genuinely amused with Bruttenholm’s role reversal in “Rasputin: The Voice of the Dragon.” Plus this whole section is packed full of easter eggs.

Christopher Lewis: The role reversal was a great part of this issue and a lot of fun. The scene where Bruttenholm was taken aback by the paranormal occurrence at the end of the issue saying ‘It’s… it’s impossible,’ while Sandhu was not shaken by it, made me chuckle.

Something that really piqued my interest was the connection between Sandhu and long-time German antagonist Kroenen. We already know about Sandhu from “Rise of the Black Flame,” but adding this connection to the Nazis gave more depth to Sandhu’s backstory. I really hope that we see these events expanded upon in the future.

That being said, Chris Roberson has been intertwining his new characters, like Sandhu, into the past of established characters, like Kroenen, for a while now. I am happy to see that this approach has been working, but have a minor criticism. In this issue Sandhu explains his backstory in a quick one-page recap colored in grey. While I was happy to get the information, this type of recap scene breaks the flow of the story, and I would like to see Roberson try to organically work this type of background information into the story (if possible).

Mark: I totally agree. I’ve no idea how it could be done better, knowing that that particular sequence is meant to introduce Sandhu to new readers, reintroduce Sandhu to returning readers, and mess with Bruttenholm’s preconceived understanding of the situation. And, I must add, it does all these things really well, but it also loses quite a bit of story momentum there, and never quite gets back up to full speed again before the end of the issue. It just feels a bit choppy. Like you, I wish this could have been woven into the background of the story, but its function is that of a mission background briefing, so structurally it makes sense, and it gives Bruttenholm what he needs to trust Sandhu’s judgement and expertise.

Sandhu’s entrance into the story was well handled. He’s clearly changed a lot in the past eighteen years, and it was a thrill to see him in action. Plus here’s someone I think Bruttenholm needs at this point. Up until now, his Uncle Simon has been his primary influence in regard to the paranormal, but Uncle Simon is quite conservative in his approach. Sandhu is much more proactive, and it’s easy to see how these two men will click as a team and transform Bruttenholm from a hobby paranormal investigator into a professional. I appreciated that Roberson leaned on Mitten to carry a lot of exposition and chose to demonstrate who Sandhu was now through action, not just a recap of what he’s been doing all these years. 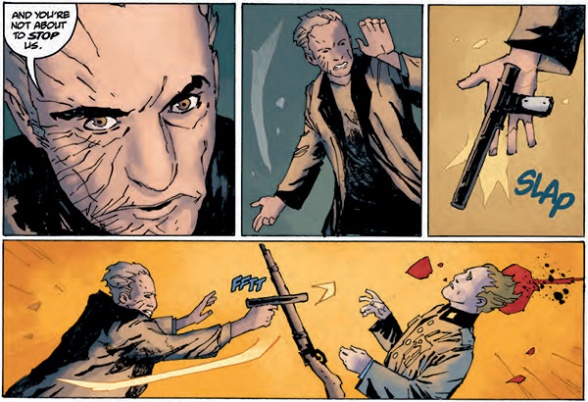 I also like that Roberson didn’t get real specific with the backstory stuff. If you’re new to this stuff, I think you get all you need, but if you want more, you can infer a lot from what Roberson and Mitten show in those recap panels, like the appearance of the Chutt warriors and the girl Kroenen kidnaps. I like that this was left to my imagination.

Chris: Those are good points. Really, everything you mentioned is why after reading this issue I am left wanting more stories about Sandhu. The confidence that Sandhu has gained since we met him back in “Rise of the Black Flame” is pretty astounding.

Let’s jump back to the intro with Rasputin, Ilsa Haupstein, Kroenen, Leopold Kurtz and Albert Mayhew. These first few pages actually made me laugh. There was something about Ilsa asking Kurtz and Kroenen ‘What complications?’ and then Kurtz and Kroenen looking defeated while not directly answering her, that was just funny. These Nazis don’t seem to know what to do in a situation where they don’t have the upper hand or can’t use brute force to get what they want, which gave the scene a comical tension. That and Ilsa losing it while talking to Mayhew took it to the next level for me. At one point she called Mayhew ‘Herr Geist’ (Mister Ghost), which was amusing and showed that she didn’t really know what to do with this arrogant Englishman.

Mark: That scene reminded me of how insane Ilsa is. There was a moment in “Hellboy: Wake the Devil” that defined her character for me in a lot of ways. 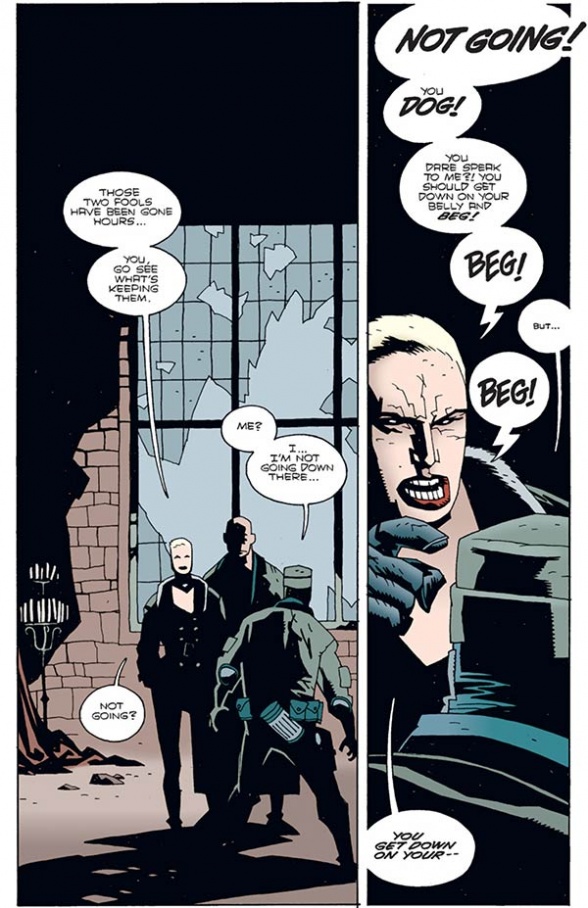 I think the opening of the issue showed a little of that Ilsa again. She’s about as persuasive as a sledgehammer—which can be pretty persuasive in the right conditions, of course, but not when tact is needed.

Chris: Let’s grade this one. I giving this issue a 7.5. There was a lot of amusing parts of the story and a great dynamic between the characters. Outside of the one pacing issue we mentioned, this was a fun read.

Mark: Yeah, the pacing is a little off in this one, but that’s a minor quibble. As you say, this issue was fun. Mitten and Roberson have given us a lot to digest in some of those panels—so much story was left on the cutting room floor, so to speak, leaving a lot to the reader’s imagination, which you’d think would make you feel short-changed, but instead it ended up being very satisfying. This sort of deliberately vague backstory moment is something Mignola did quite a bit in the ol’ “Hellboy” series, and using that technique here brought the story to life in a way that felt both new and familiar. I’m giving this a 7.5 too. 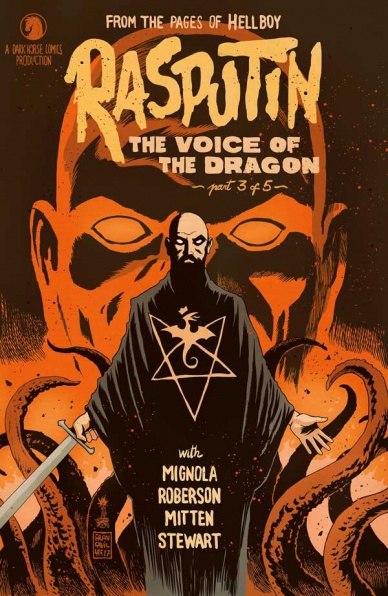