Rasputin has his sights set on the highest echelons of society, the Tsarina of Russia. But, even with his powers, can a farm-boy ingratiate himself with Royalty? 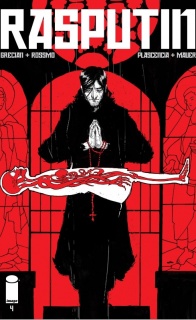 BETRAYED! Rasputin’s life changes forever when he’s asked to save the prince’s life. But first the mad monk has to let someone else die. His road to infamy begins here.

“Rasputin” is an interesting beast. It’s languid, meandering, and dreamlike, but it’s never without focus. The first pages of the first issue made sure of as much, with the sudden announcement that Rasputin’s closest friends were plotting to kill him, and the following three issues have spent the majority of their time giving us an insight into why that might be. But, as I mentioned before, this isn’t a story that plays out in the expected, linear fashion. Rasputin – the protagonist and near-omniscient narrator of his own demise – is clearly quite a raconteur and, because his mystical knowledge of his own past, present, and future has meant that he’s seen his death coming for a while, he seems far more interested in the why than the how.

Issue four takes our protagonist, and his rapidly expanding crew, from the dive bars on the outskirts of civilisation to ‘The Winter Palace’ of Tsarina Alexandra. Rasputin – styling himself as ‘Brother Grigori’ – is clearly taking the first steps onto the road that any history buff already assumed was on the way, that of becoming the aide to the Tsar and Tsarina. During this issue we get a chance to see a more civilised side to this historical piece that has been lacking from the previous issues, which means more dialogue that Rasputin’s previous encounters with monosyllabic soldiers has offered up. Grecian’s execution of Russian Royalty feels at once both familiar and foreign, his dialogue never comes off as overly modern, but neither does it feel forcably anachronistic. And While Rossmo’s portrayal of the palace definitely feels more fancy than anywhere we’ve seen so far in the book, he doesn’t allow pomp and circumstance to take centre stage, preferring to focus on the characters with a lot more facially expressive panels.

Grecian’s re-imagined Rasputin comes complete with the mystical power of healing, an ability that he can do to whoever or whatever he chooses. But in doing so he takes on an aspect of his intended target – previous examples of which include the kindness of his mother and the ferocity of a grizzly bear.  While the effects seem to be reasonably minor, they are long-lasting enough that Rasputin has learned to be a little more reserved in the application of his power. This reservation is tested in this issue, as Rasputin is called upon not once but twice to use his powers. This is also the first issue in which we witness what the strain of absorbing a little of someone else might be doing to our monk, and in terms of the long-term story arc I’m really interested to see how the continued absorption of a range of different personality traits affects Rasputin’s psyche. At the moment, Rasputin is far from being the shady, morally questionable, ‘Mad Monk’ that traditional history paints him as, Grecian’s protagonist is a mild mannered, thoroughly likable character who oozes charisma and charm. But this issue is the first time we see a crack in his veneer, and it begins to raise pressing questions about whether he’ll still be the innocent lamb he is now when it comes time for his inevitable slaughter.

While the first few issues of the series have been rather slow, a trait that a few reviewers have suggested put them off initially, I would argue that Grecian knows exactly what he’s doing, plotting a oneiric narrative that weaves skillfully in and out of multiple time streams. It’s a bold gambit to begin a story right at the end, but Grecian’s storytelling style is so polished that the journey he’s offering is good enough to be worth it.

But the success of this slower paced storyline wouldn’t be possible without the stellar art that Riley Rossmo is laying down. Rossmo and Grecian have been working together on and off for over a decade now and the symbiotic nature of their relationship is on full display in “Rasputin”. The story flows best when the panels drop out entirely and Grecian relies on Rossmo to interpret both action and introspection to the reader. In earlier issues Rossmo has had arguably more dynamic panelling with which to show off his skills (Rasputin’s father battling a bear with a hatchet springs to mind) but he continues to wow with more reserved, nuanced work in this latest issue. his thoughtful execution of posture and bearing brings just the right kind of poise to a comic book dubbed ‘Dracula meets Downton Abbey’ and his ability to convey miniature changes in facial expressions allows Grecian to script his characters saying one thing while obviously meaning quite another. This means that, even when faced with a silent dinner party at the Tsarina’s palace, the audience is offered a cornucopia of communication.

And Ivan Plascencia’s colouring deserves special mention, echoing the tone of the issue perfectly he utilises a minimal palette and heavy use of shadows to carry the emotional weight of the conversations that are taking place. As the tension begins to ramp up, Plascencia’s melodramatic work is only going to become more important.

While the slower pace and lack of punching this series offers might not be for everyone, I honestly think that, in terms of mystery and intrigue, “Rasputin” is one of the best comics I’ve read in a long time. The artwork is superb, perfectly pitched for the shadowy back-rooms of 19th century Russia, and the magic, though few and far between, is so focussed on consequence and causality that every instance of sorcery draws you into the story.

Final Verdict: 7.6 – If you’ve got the patience for a book like this then it’s definitely worth your time. One to watch for 2015.