Trevor Bruttenholm and Sandhu’s adventure escalates as they follow Rasputin and his Nazi acolytes in the catacombs of Paris. 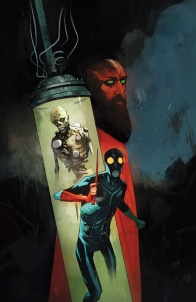 Bruttenholm and Sandhu’s mission to uncover the evasive “Master” behind the Nazis occult experiments is derailed when they fall into the clutches of their enemy.

Mark Tweedale: Up front, I have to admit, this issue has some problems in terms of too much talking and too much direct exposition. These problems have been popping up often in Chris Roberson’s books and they often take the lustre off an otherwise great story. That said, they didn’t bother me nearly as much here as they usually do. I’m having fun with this series. This issue in particular has a Raiders of the Lost Ark feel to it, which I’m getting a big kick out of. How’re you finding it, Chris?

Christopher Lewis: I am having a lot of fun with this issue too. The series has turned from Bruttenholm’s first professional paranormal investigation into an adventure story with Bruttenholm and Sandhu, and I am enjoying the ride. I also surprisingly didn’t have any issues with the expository dialogue. I thought it seemed to makes sense with the context of the story. However, I did take issue with the minor narration during the Kroenen scene (only narration in the issue) as I thought it broke the flow of the story and it had an odd location in the middle of the book.

Really, the key to this issue is that it is non-stop action throughout, so it’s gonna be hard to avoid < b>spoilers. Consider this a warning.

Right out of the gate we immediately started with Nazi’s in the Parisian catacombs, human skulls making up the walls, and mechanical Anubis dogs attacking. I found this to be a great way to start the story and set the tone of the issue.

Mark: Yeah, plus it’s exciting to see more of the Heliopic Brotherhood of Ra in action. I mean, most of the time we see them, they’re just a bunch of stuffy European gentlemen sitting around talking about big, important mysteries, which is fun, but it also means when we see them in action it’s something big, like in “Witchfinder: In the Service of Angels” where they show up with electric spears.

Plus, I kind of have a weakness for stories about booby-trapped tombs. It makes me think of Tintin and Indiana Jones, but with an extra kick Victorian secret society stuff. Then a few pages later we get Kroenen’s Frankenstein-like creations and Sandhu working his magic.

Speaking of which, Sandhu’s stealing the show in this series. It started off as Trevor’s story, but more and more he feels like the sidekick. I’m not complaining either. The dynamic between the two really works.

Chris: Sandhu is really killing it here. Speaking of the morgue scene, there was a great panel that I keep thinking about where Sandhu shoots Kroenen. By itself it is a great action shot with Sandhu off balance due to the kick back of the gun and Kroenen flying through the air from being shot. Another cool thing is that the artists set up the panel to encourage eye movement from left to right. For example, when looking at the image my eye is immediately drawn to Sandhu, then the primary colors and lines around the gun, afterwards to the red blood, and finally to Kroenen. If that is not enough, the yellow BLAM, BLAM, BLAM lettering prods the same movement to the right.

Mark: Yeah, now that you point that out, Christopher Mitten, Dave Stewart, and Clem Robins all nailed that left to right reading of the panel. I said it frequently on the “Rise of the Black Flame” series, but this is an art team that works fantastically together. I mean, Stewart always has a way of finding just the right way to tailor his coloring to suit an artist, but with Mitten there’s an extra spark there, especially in the more otherworldly or impressionistic sequences. Given where the characters are at the end of this issue, I think the next is likely to look bloody spectacular.

Chris: For sure. You also mentioned the dynamic between the Sandhu and Bruttenholm. Since the two have met, we have seen a lot of character growth in Bruttenholm. Early in the series he seemed to be meek and easily startled. Since meeting Sandhu he has become more confident and assertive. I think a lot of this is because he no longer is just reading about paranormal things, but now is involved in them with Sandhu. Also, seeing Sandhu in action has also given Bruttenholm another role model to aspire to be like versus his uncle who was more cautious in regards to the paranormal. Outside of the story Chris Mitten has done a great job depicting this transformation in Bruttenholm’s throughout the series (see image from issue #1 and issue #4 below).

Mark: Honestly, I’m sad there’s only one more issue to go. Hopefully we’ll see a little more of these Bruttenholm World War II stories in future. And I sure hope Sandhu survives this story. We know he’s dead by the 1950s, but it’d be a shame to take him out of the picture so soon.

Chris: I feel the same way. Let’s grade this one. I’m going to have to give this one a 7.75. It did have some of the typical Roberson dialogue issues, however I had so much fun reading the story that it didn’t hinder my enjoyment of the book. Also, the art was killer. I can’t wait to read the final issue. 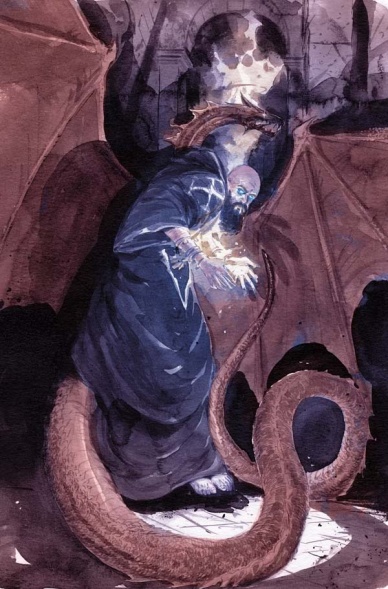