“Rasputin: The Voice of the Dragon” comes to a close with a few unexpected twists… And is this one-shot miniseries the beginning of a bigger story? 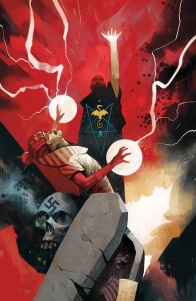 Bruttenholm and Sandhu reach the site of the Nazis’ occult activity, where the shadowy “Master” himself is about to complete his occult experiment.

Mark Tweedale: I think I’ll drop a spoiler warning right up front. This final issue is mostly a single scene and I don’t see how we can begin to talk about it in any meaningful way without spoiling something.

OK, that said… Sandhu! NO! Damn it, I was hoping he wouldn’t die by the end of this arc. It’s the sort of thing you expect with these mentor-mentee stories, so it was hardly surprising, and given the way the Hellboy Universe jumps back and forth throughout history with its stories, there’s every chance we’ll see Sandhu again. However, what we won’t get is Trevor and Sandhu working together again, and that’s the loss I’m lamenting here. I wish they’d held off on this even for one more arc, because the relationship between these two was the single best part of “Rasputin: The Voice of the Dragon,” and I would’ve liked to see it develop at least a little further.

Christopher Lewis: I completely agree. Their relationship made this story for me, and I wanted him to live at least a little longer.

That being said I thought Sandhu’s conflict with Rasputin was anticlimactic, especially after seeing him fight Kroenen and other Nazis. And really this whole issue, which was the peak of the story, came off anticlimactic to me. Everything up until now felt like it was building to what I expected to be a large conflict between our heroes and the Nazis. Instead everybody seemly stood around watching Albert Mayhew perform the ceremony with minor scuffles occurring on the sidelines. I honestly found this to be a little disappointing as I expected the focus of the climax to be more on Bruttenholm and Sandhu.

Mark, what are you thoughts on this?

Mark: I’m of two minds on this, and part of my feelings on the matter are tied up on whether “Rasputin: The Voice of the Dragon” truly is a one-off miniseries or the first in a series. Given the ending here, I’m inclined to think that it’s the latter.

Up to this point in the story, Rasputin has been the source of all the trouble Trevor and Sandhu have been dealing with, but he’s not in the book very much. And when I think about the manner in which we’ve seen Rasputin portrayed in the Hellboy Universe over the years, a vast majority of it is post–“Seed of Destruction.” By that point, Rasputin is greatly diminished, a mere shadow of his former self. It’s easy to forget how strong he was in his prime.

So from that perspective, I understand why things played out the way they did. Sandhu was built up to be a truly formidable opponent, and yet he was so casually murdered by Rasputin, who was barely even paying attention to him. It’s a way to frame 1940s Rasputin as an extremely powerful guy.

And on the other end of the spectrum we have Trevor, a young novice. The story gave him all he could really handle at this point in his development. Anymore and he would’ve likely been killed, so I can understand why Roberson was pulling his punches.

This feels a bit like ending the first Star Wars right after Obi-Wan dies and Luke runs off into the Millennium Falcon. It’s not a victory; the bad guys got exactly what they wanted, and a mentor figure just died. So, if this is the end it’s a pretty sucky ending; but if it’s to be continued, then all the major players have been set up for a more compelling sequel.

Still, I wish there had been a way Trevor and Sandhu could have been in the middle of this mess, fighting side by side. That would have been more dramatically satisfying.

Chris: The end of this issue does seem like it is setting things up for more stories related to Bruttenholm becoming a covert agent against Rasputin and his acolytes. If so I do hope they use the title “Rasputin: The Voice of the Dragon” for future arcs, as it is a great name.

Switching gears, I was surprised to see that a large golden tablet was hidden in Eugene Remy’s tomb. It looked conspicuously like the golden tablets held by the Aztec Ogdru priests described in “Hellboy: The Island.” Since the Aztec tablets were melted down into gold bars by the Spanish, I was even more surprised to see that one of them found its way into the hands of Eugene Remy. Unless the Egyptians somehow had a separate set, which I find highly unlikely.

Mark: I read that as one of the Aztec tablets had survived and been recovered by the Heliopic Brotherhood of Ra. I imagine this is another area that would appear anticlimactic if the reader wasn’t familiar with the tablets seen in ‘The Island,’ but I thought it was pretty cool. I’m glad to see you picked up the connection too. It definitely improves the issue.

Chris: Yeah, it was a highlight of the issue for me. That and watching Albert Mayhew die, which gave me a little bit of morbid joy.

Mark: I got a kick out of him being alive and ranting actually, just because Mitten bought that moment to such vivid life. Shall we grade this one?

Chris: I am giving to give this issue a 7. Sandhu and Bruttenholm’s relationship is the star of the story. I did feel the ending was anticlimactic, but it appears to set up things for a larger story going forward, and Mitten’s art is fantastic.

Mark: I’m going with a 7 too. I enjoyed the issue, but that final battle didn’t quite come together the way it needed to. I’ve had a blast with this miniseries, and if it is indeed the first in a series, I hope the next is on its way soon. World War II is an era that’s connected to so many aspects of the Hellboy Universe and yet it’s hardly been touched at all. The possibilities for another story are certainly tantalizing.

Final verdict: 7 – Mitten’s art is the major draw here. The ending’s reach exceeds its grasp, but “Rasputin: The Voice of the Dragon” is still an exciting read and left us wanting more. 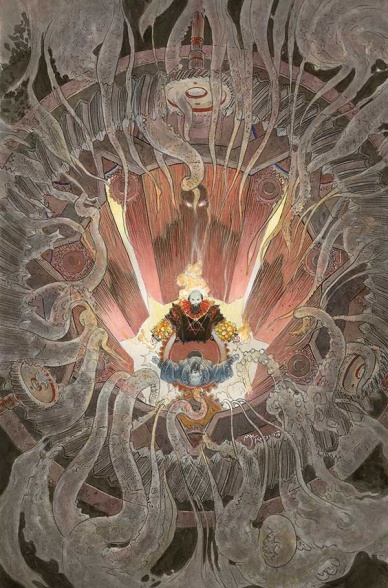