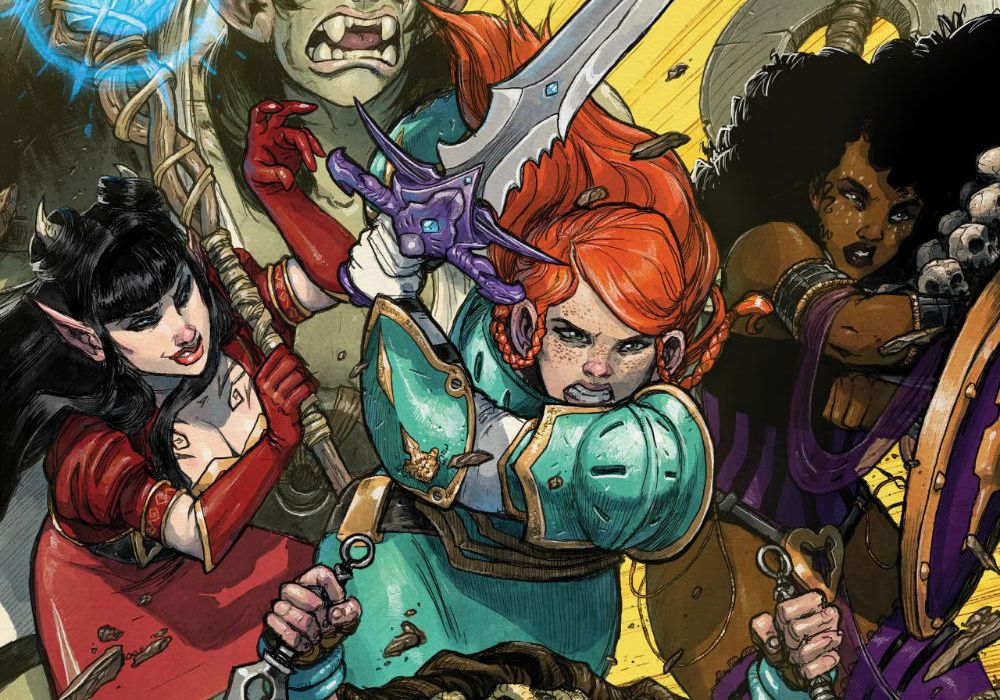 “Rat Queens” has always been an excellent fantasy romp, whether through high action or character-driven drama. We have a new story arc (albeit cutting previous ones short), but familiar characters, so let’s see how it goes. 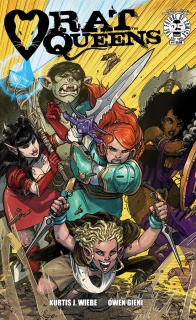 “CAT KINGS AND OTHER GARYS” Part One

NEW STORY ARC! The Rat Queens are back! Betty, Violet, Dee, Braga, and Hannah return! Palisade is still a rat-infested troll’s ass, and everyone still hates Gary. It’s been a while since the Queens have done a good slaughter, so join them as they get back to the basics of killing monsters and drinking away the profits! A fresh, soft reboot to the head for the Rat Queens with artist OWEN GIENI!

Though the issue is billed as a “soft reboot,” it’s still more or less a continuation; longtime fans don’t need a reintroduction to any of the characters, while new readers can pick up the various roles quickly enough – even without knowing the names, they all fit their roles as the cleric, caster, rogue, fighter, and barbarian. Of course, the characters are so much more than just their adventuring party roles, but their traits are made clear early on.

It is, however, very much a reboot in the sense that all the twists and turns previous chapters brought us seem to have gone away; Hannah seems to have grown her hair back and isn’t currently imprisoned/working with a demon, Violet has shaved her dwarven beard again, and they’ve all been reunited – that’s not even getting into how issue #16 ended! So either quite a lot happened between the previous volume and this chapter, or a fair bit has been erased.

Putting that aside, we can get to the issue itself. Praise must be given from the very first pages, with a brilliant start. It begins with Violet waking up, her head wounded and pounding, wreckage and bodies around her. The scene is colored crimson, which as we all know is typically the sign of someone waking up in a smoldering battlefield, or an area of wreckage.

The comic plays with that expectation brilliantly, leading to the reveal that it’s the end result of a massive party. The field of red? Plastic solo cups (which, as we all know, exist across all realities, fantasy or otherwise). Without even a full sentence, those few pages immediately set the tone for the comic, and let us know what kind of story to expect.

It also serves as a great introduction for the artwork of Owen Gieni, who works that moment for all it’s worth. Just the shot of the post-party wreckage is excellent, covered with little details that add so much detail and flavor to the scene. Vi’s expressions are particularly fantastic in that scene, covering a range of emotions from a confused awakening to “Oh gods, what happened last night?”

Of course, the story isn’t about the party – that’s merely the introduction, as the Rat Queens depart on their quest. It’s no noble journey to right the wrongs in the world, or dethrone an evil lord, but rather a familiar task for anyone who’s played tabletop or electronic RPGs – as Hannah so aptly puts it, “massacre some monsters for money.” It’s a fitting task for the characters, and works as both a good starting point for new readers and a light breather after the increasingly heavy arcs of the past.

There are a few additions to the central characters (having been promoted from side characters) that help add flavor to the comic. First and foremost is Gerard, Hannah’s father, who was at the center of quite a bit of trouble in previous issues. It’s been nearly a year in real-time since that story arc was printed, and it seems like quite a bit has happened in-story during that time frame to get us to this point, but the previous story arc is touched upon briefly. Very, very briefly, mind you, and completely glances over the fact that he was supposedly executed last chapter (though admittedly the demon who told Hannah as such could have been lying).

Either way, he provides some very amusing interactions with the other characters. I absolutely love the expression on Hannah’s face after he calls out for her to bring along an alchemical pouch (bravo once again to Owen for the work on the expressions), and the family dynamic works in a rather amusing manner.

The other is Braga, who’s been a supporting character from the very beginning, and the star of a very good one-shot chapter, “The Once Prince, Now Bastard.” She joins the Rat Queens on their journey, and fits in perfectly with their brand of violence, depravity, and sarcasm (in the best possible way, of course).

Just seeing the characters’ journey provides plenty of good character moments, from Betty’s talk about her family (her mother was in a sex cult), to Dee’s newfound fascination with a book called “Hiking: The Ranger Way.” Kurtis Wiehe has these characters down to an art, and everything they do or say is filled with personality. Hannah continues to get some of the best lines, but everyone has shining moments.

Once more, the art proves incredibly strong. Not only are the characters very well designed, but the backgrounds are lush when they want to be, or cold and damp when the mood calls for it. There’s a particularly excellent moment where they’re sitting around a campfire as Vi arrives, and we get a half-page panel showing all the Rat Queens lounging about – reading, exhaling huge amounts of smoke, or just zapping a bat with magic; it’s a great little moment for every character, and once more Owen’s use of expressions is wonderful, going from a cheery, smiling Vi in one panel to an exasperated, almost cartoonish look of distaste in the next.

However, while the journey may be as important as the destination, it’s in the latter act that things get really interesting. An old character returns (once again showing Kurtis’s expertise at writing a wide range of family dynamics for the characters), with a team of his own; they technically parallel the Rat Queens, although not in an evil opposite “Linear Guild” sort of way, but more of a “bargain bin knockoff” manner. And it’s hilarious. The new characters are outstanding in both thematic design and visual execution, from the geriatric, retiree wizard to the druid in a dress made of mushrooms; I love the concepts and I love the designs, especially when we see each member of the Rat Queens interacting with their counterpart.

Even more artistic credit must be given to the monster they fight near the end. It’s a great design – sort of a humongous, draconic, prehistoric, goose monster. The avian form, scales, and piercing red eyes all work together well, and there’s a great battle scene where we each characters’ attempts to fight it create even columns down the page, with the monster’s counterattacks silhouetted down the middle.

This issue, like those before it, remains an excellent read thanks to equal parts great art, wonderful characters, and solid writing. It’s a story about adventuring women, each with their own strengths and flaws. The characters own their personalities, their quirks, and yes, their sexualities when the moment calls for it, and each one shines in her own way. They drive the story more than the quests they embark on do, and Kurtis Wiebe has crafted a wide world of excellent, unique characters. Combine that with the great designs, expressions, scenery, and dynamic action from the artwork of Owen Gieni, and you’ve got a critical hit.

Final Verdict: 9.1 – Hits all the right notes for character, story, and artwork; great jumping on point for new readers, though old fans may still long to get closure from the last issue.