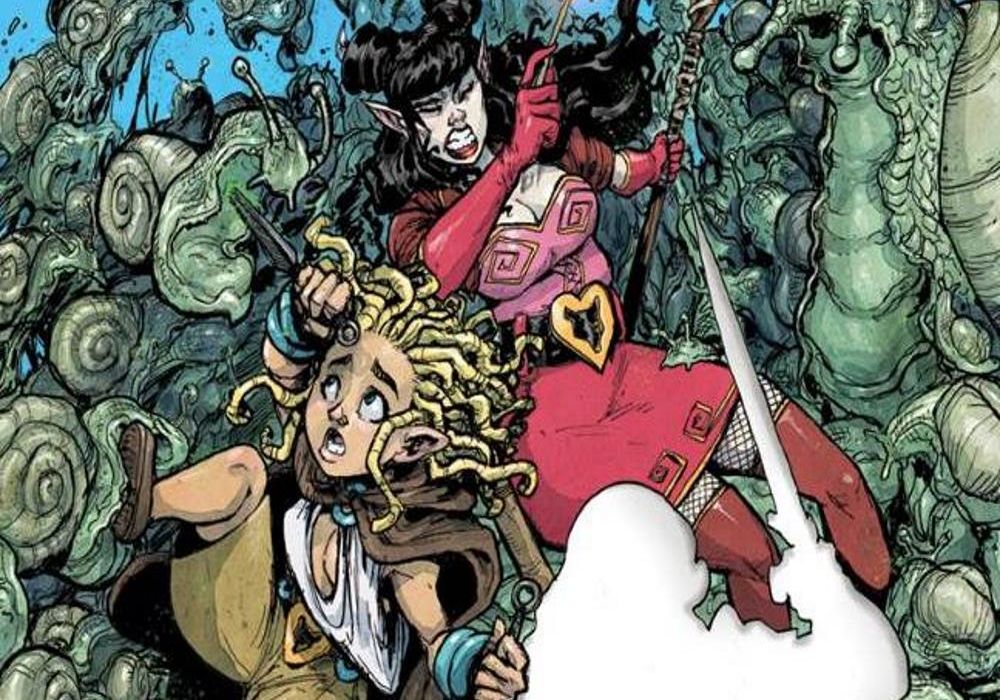 If you’ve fallen behind, “Rat Queens” has been on a roll lately. Or a series of critical success rolls if you prefer. It’s doubled down on what makes the series so fun. The central four Queens are a near perfect dungeon crawling party. All the comic needs to be successful is to send them on wacky adventures through caverns and castles. So it is perhaps a testament to the series “Rat Queens” #9 tries something much weirder than that. 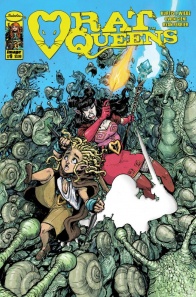 “THE COLOSSAL MAGIC NOTHING,” Part Four Whatever happened to crazy, baldheaded Hannah? Why hasn’t she been locked away in a dimensional prison? Dee comes face to face with the mysterious reality wizard and learns that she’s behind it all.

Calling this issue a risk is sort of a tough claim to back up. If anything, it seems to be reverting the Queens to where they found themselves at the end of the first volume of the series. Vi and Betty are going through personal growth, Dee is embracing her destiny and taking on responsibility, and Hannah is . . . not. Hannah is going power-mad-demon-crazy and generally ruining everything. So business as usual.

The issue follows a tried and true genre staple. We mostly follow Dee over a period of time that spans decades. We see the Queens settle down and start families (while still drinking and cussing and doing lots of drugs) while Dee becomes the High Cleric of N’Rygoth (and also gets laid). The three of them reunite for one last job, which goes horribly wrong, and ends with Dee sending her memories back into her older self so she can avert the coming catastrophe. It’s sort of a D&D version of ‘Days of Future Past.’

That premise doesn’t get clearly spelled out until the end, and even then the details are sort of muddled. Usually when a story pulls a ‘Days of Future Past’ (or an ‘Every Season of Heroes’ if you’re feeling vulgar) everything comes down to one moment, one decision that the timeline hinges on. I’m sure you can make an argument here, but the issue doesn’t do a lot to spell out the point of divergence. That leaves the conflict feeling a little bit toothless.

The muddled writing is actually a major source of weirdness. The issue has an unintentional dream-like quality to it. By fitting this timeline into such a short number of pages, it’s hard to tell which details are the most important. I had to go back to pick up on the ongoing threads of Hannah rescuing her father, which ended up being far more important than Dee’s relationship with Adua, even if the latter is given a substantial number of pages. The Rat Queens family reunion is definitely the most memorable scene, but it’s not as important as a quiet conversation that the main three have as they ride through the woods towards their final destiny.

The script is to blame for the strangeness. The dialogue is good- everyone has a strong voice and a great sense of character. The situation is certainly interesting. The art is stellar. It’s the plotting and pacing that feel off. Big moments aren’t given big pages, important moments are underplayed, and incidental garnish are served up like the main course.

In the opening credits, both Kurtis Wiebe and Owen Gieni are credited with plotting, but it’s unclear if that means that both worked on the script. In actuality, it’s likely that they came up with the premise of the story together, but Wiebe worked on the script. All speculation to process aside, it’s a peculiar problem that doesn’t entirely detract from the books merits.

Oh and the art. Did I mention the killer art? Owen Gieni has been slaying it like a Chaotic Neutral Half-Orc Barbarian. Kurtis Wiebe has been the consistent presence on “Rat Queens,” and he is owed respect for his good work, but Gieni takes the script he’s given and fully delivers. The violence is disgustingly awesome, and the drinking looks like nauseating fun. His pixelated shadows are a cool touch, especially when paired with his scratchy pencil work. When he gets a chance to draw the extended Rat Queen family picnic, he has a ton of fun with it, and thus you have a ton of fun with it. Alternate versions of characters? Also a ton of fun. Gieni combines technical skill, personal style, and unrestrained creativity in equal measures.

All of this makes “Rat Queens” #9 a mostly good issue, but comics aren’t a bunch of different unrelated categories. The story and script problems really detract from what could have been a stellar issue. You’ll have fun spending times with your favorite Queens and their pals, but the epic conflict feels lukewarm and half-finished. Here’s to hoping it all comes together in the next one.