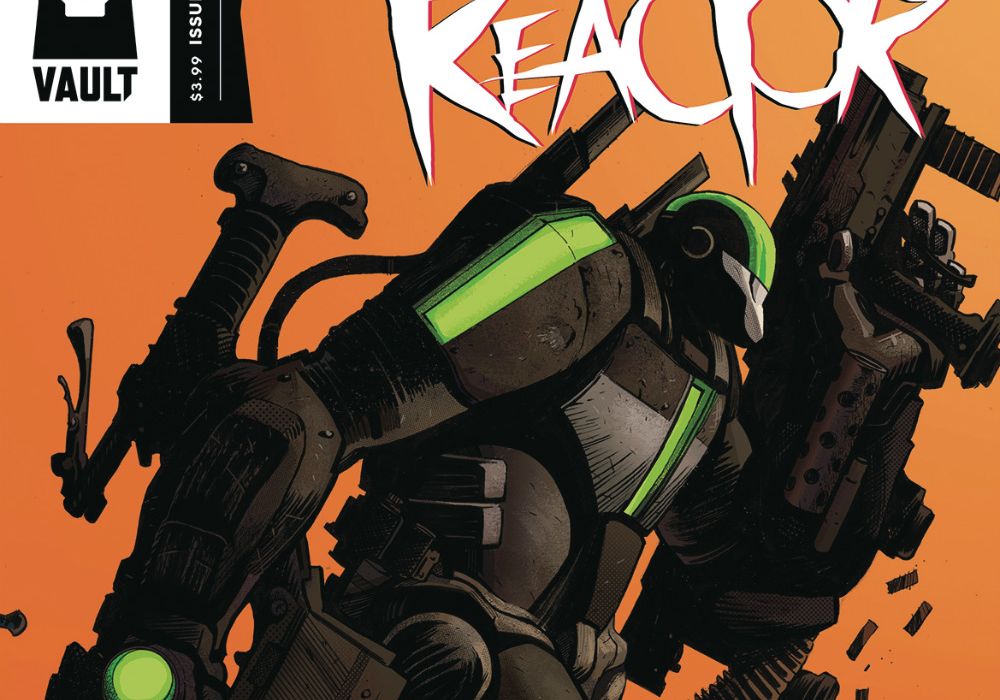 It’s an all-out blockbuster action movie of a comic about Vampires, giant mechs, and a nuclear holocaust. Read on for our review of “Reactor” #1, which contains mild spoilers. 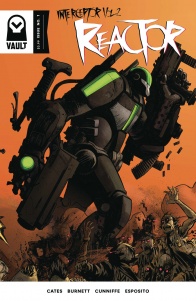 There’s Weep, your average machine-gun-wielding teenager raised on an Earth overrun with vampires. There’s Poli, who landed on Earth with the mission to kill every damn vampire there. And then there’s King Luc’s heavily fortified blood farm. You do the math. From Donny Cates (God Country, Redneck) and Dylan Burnett (Weavers) comes Reactor, a whole new entry into the world of vampire warfare, overpowered mech suits, and 10-year-old presidents that Interceptor kicked-off.

The first thing to note about “Reactor” #1 is it starts with a rousing speech from Poli Lehan, Commander of the human resistance army fighting against the legions of Vampires under King Luc, on the nuclear wasteland that is Earth. This speech, that lasts no less than seven pages (including two double-page spreads) serves two purposes. Aside from being the rallying cry that unites a ragtag bunch of war-weary troops and prepares them for the battle to come, it also serves as an exposition block to catch new readers up on what happened in the first mini-series. “Interceptor” was a five-issue series from Heavy Metal that introduced this apocalyptic nightmare of an Earth, as well as the main cast of characters that are leading the fight back against the forces of the night.

While it may seem like a negative to a) start a book with pages of exposition and b) start reading a series with volume two, The second thing to note about “Reactor” #1 is its hilarious self-awareness. Writer Donny Cates includes not one, but two moments in the narrative where characters shine a light on the issue’s opening conceit. Firstly Weep, the violent yet dorky teenager who starts the issue piloting a giant mech suit, calls the speech boring (“are you for real gonna recap everything?”) and secondly two vampires discuss not only how overwhelming the opening crawl to Star Wars (“that’s a buncha information to just, like, throw at somebody, right?”) but how crazy it is to start halfway through a story (“how is it the first one if it’s like a sequel already?”)

That’s just one example of how Cates weaves a series of very human reactions into what is a ludicrously over-the-top action movie of a comic. Despite having just told you that the book opens with exposition, “Reactor” #1 has an unrelenting pace made up of set piece after set piece, with a brilliantly funny and sharp script. There’s no need to worry if you’ve not read its 2015 predecessor, as it’s a simple enough premise to be able to dive right into the book and follow along. Aside from being an issue that drops you right into the middle of the action, the speech at the beginning and the open dialogue of the characters mean you’re caught up pretty quickly.

Joining Cates on this frenetic adventure is Dylan Burnett, who also illustrated “Interceptor,” as well as “Weavers” with Si Spurrier. “Reactor” relies on eye-popping visuals and thrilling action, and Burnett delivers with a wonderfully frantic style that at first may appear wild and out of control but in reality, every page tightly controls your focus and provides a choreography to the action sequences that just flows through the pages. There’s a classic superheroic structure to the chaos, with large, booming sound effects, widescreen panels that frequently explode into full bleeds, and a general structure to the issue that builds the drama as well as the scale of the set pieces, leaving you wondering where they could possibly go in issue 2.

Where issue 2 goes, however, will no doubt be largely governed by the twist at the end of the book. Without giving anything away, assumptions are made by some characters in “Reactor” #1 that turn out to be based on a fundamental lie, something that pushes the series forward in an exciting and unpredictable way that still feels like a classic second act reveal adopted by some of the best action movies.

You’d be remiss in any discussion of “Reactor” #1 without mentioning Dee Cunniffee’s colors. The idea of a nuclear holocaust designed to rob the vampire hoards of sunlight sounds like a grim and gloomy affair, and perhaps in lesser hands that would be reflected in the palette. Cunniffee, however, acknowledges the superhero influences and fills the pages with bright reds, oranges, and purples, the backgrounds often drenched in bold greens or pinks, or even at one point brilliant white to contrast against the giant black “Boom!” sound effect. When Weep throws herself into a crowd of vamps while dual-wielding machine guns, she’s leaping out from a bright red background, surrounded by pops of white and the “brakka brakka” of her weapons firing. This is a thrilling, visually engaging book that is constantly keeping you on your toes.

“Reactor” #1 may be the start of the second volume to a series, but don’t let that put you off. Cates and the team are fully aware that you may not have read “Interceptor,” and make it really easy to just dive right into the world fresh. The big, hyper-kinetic action and tight, witty script make “Reactor” a straight-up old-fashioned thrill-ride that is, above anything else, fun. The heroes are fascinatingly human and the vampires are too, surprisingly. This is a book unafraid to throw everything at you, and if you ever find yourself wondering where you can find a comic that feels like a summer blockbuster, with all the excitement and humor and drama that comes with it, then “Reactor” is it.

Final Verdict: 8.8 – An exceptionally fun comic with non-stop action and a great cast of misfits.