Cyberpunk is a genre that has had something of a resurgence in the last decade in all types of mediums, especially video games. 2064: Read Only Memories was an example of that genre done in a way that paid homage to its roots and pushed the boundaries of futurist style and fashion more than it had any right to. Naturally, that means it would work perfectly as a comic, and with Sina Grace and Stefano Simeone on board, we’re bound to be in for a wild ride. 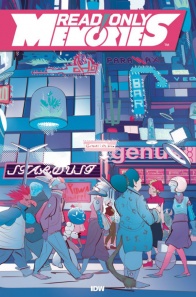 Based on the hit game 2064: Read Only Memories, enter a cyberpunk universe like you’ve never seen it before! Santa Cruz, California. A beach town just 50 miles from Neo-San Francisco. Lexi Rivers, former detective with the Neo-San Francisco Police Department, has left the big city lights behind in favor of opening her own agency. Valentine’s Day. A time for celebrating love—or finding it. When a robot’s human lover goes missing, Lexi will be faced with a case unlike any she’s tackled yet, one which just might show her that not all is as it seems in this pleasant beachside community…

Grace does a great job of establishing character quickly through some clever narration and showing with protagonist Lexi Rivers. From the first page, the narration establishes Lexi as cunning and smarmy, something which clearly contrasts the dialogue she’s saying to an interviewee to show how much of an act she’s putting on. Grace then uses the context of the scene to introduce readers to more aspects of Lexi’s character, as the interviewee Susan tries to turn the tables to learn more about our protagonist. The contrast of narration vs. dialogue in this sequence is well executed as it can blur the real and the false in Lexi’s fake persona and her real background, making it feel more authentic that she works as a private eye of sorts. We see more of her skill and ability revealed through the actions she uses throughout the interview, like when she implants spyware into Susan’s glasses, and when she almost-smoothly dodges the inquiry of a passing robot with later story importance. Grace does a good job of trusting the art to portray the action in these moments, only supplying dialogue and narration that adds to Lexi’s entertaining personality.

Lexi doesn’t just function as a delightfully charming protagonist, but also as a great entry point into exploring the world of “Read Only Memories”. By the time she’s agreed to start investigating the robot Hedy’s case, we see her interacting with the technology in her house and move into the world beyond that. Having her quickly research Hedy’s case in the middle of interviewing makes for some great back and forth and shows how intuitive the technology of this era is. Grace also integrates what I assume must be aspects of the original text’s gameplay as Lexi breaks into John’s house with snazzy portable gadgets, before opening into a scene that reads like a point-and-click mystery game. Each panel has a query into an area of the room almost like by reading it, we’re inquiring into each aspect, but it also functions seamlessly as a part of the narrative without breaking the overall pace. Later on, having Lexi flirt with a bartender that we find out is a robot is super telling about the nature of robotics in this world without having to go into heavy details about the origins of technology and robot ethics in the year 2064. Grace does a great job trusting readers in these instances and it pays off significantly.

Stefano Simeone does a fantastic job translating the vibrant but simplistic visuals of the video game into sleek, stylish and slowing comic book art. The general art design works well within the aesthetic of the game world, bringing a simplistic but undoubtedly futuristic to the issue. And yet, the world still feels eerily familiar, giving a sense that this could very well be where we are at fifty years in the future. The bar setting in the first scene has the trappings of a modern-day bar, with rounded lounges and martini glasses, yet when the scene pans out eventually, we see patrons with giant robotic heads and inspired fantastic looking hairstyles. When we later move back to Lexi’s apartment, we get the same neat contrast of modern vs. futuristic. The apartment is very minimalist and has the usual trappings of a thirty-something freelancer’s style, yet we’re undoubtedly placed in the future when her computer pops up with a countless number of screens hovering all around the room. We even get a neat bit of game design trickling in the visuals when Lexi breaks into John’s apartment when a little mini-map pops up in the corner, which is a nice touch.

There’s an unmistakable flow to Simeone’s art that makes the whole issue feel smooth and kinetic. We get a sense of it just after Lexi has begun interviewing Susan, with a little aside that explains what Lexi really does for a living. Simeone has the whole page work as a giant downward-swirling sequence, taking the readers eye through long corridors of Lexi fly-kicking an assailant and investigating a corner tucked neatly underneath, before revealing Lexi and Susan conversing in the corner making the whole moment seem like a thought bubble. The constant changing of camera angles adds to this fluidity too, without coming off as too disorienting. When Lexi hears the knock on her door, the camera pans from a direct bird’s eye view to a diagonal-top view, lending to the innate sense of caution and fear that goes through Lexi’s head as she’s not expecting an after-hours call.

The color palette here is simple, yet works sublimely within the confines of being two colors for the majority of the time. The blue and purple from the beginning plays well with the simplistic design aesthetic to give it a futuristic appeal, especially as the elevated bar on the first page pops with effervescent pink light. Simeone plays with single colors too to create a specific mood. During the thought bubble scene, there’s an aggressive pink shade throughout to depict the occasional brutality of Lexi’s job. Blues are used really nicely during the outdoor scenes to create a sense of loneliness and hostility, especially as Lexi stalks through a sidewalk with pine trees hanging over her.

“Read Only Memories” #1 is a great lesson in video game adaptation comics. Grace overlaps dialogue and narrative to immerse readers quite easily in the unique, futuristic society of the game, whilst also serving as a great way to show character building. Simeone’s art is effortlessly stylish and flowing, feeling like a unique but entirely appropriate art style to adapt the video game’s aesthetic in. I can’t wait to see where this series goes!

Final Score: 8.9 – A cyberpunk comic debut that is effortlessly cool and immerses even first-time readers into this intriguing world.