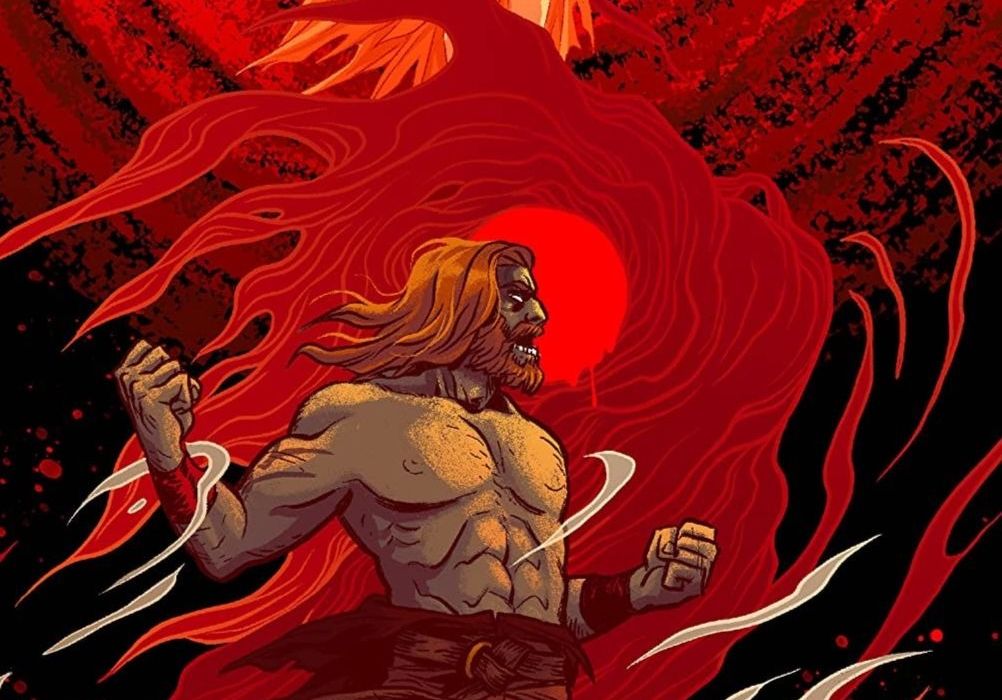 There’s a part of everyone that wants to go back to an idyllic past, a time in our life when things were simple, but that’s easier said than done. Instead of going for some unattainable past, there’s an opportunity to take the lessons you’ve learned and try to improve the world. In a way, it seems like this is one of the big questions asked by Essen Breaker, The Devil’s Son. A character with a reputation of having death follows him wherever he goes. Despite all this, though, is a desire to become better, to become more than what the world has made him. In “Reaver” #11, Justin Jordan wraps up the second arc of the series with plenty of violence, but a big question, is it possible to be good while doing bad things? 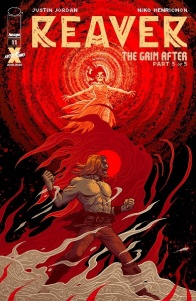 While the first arc of “Reaver” was more of an ensemble piece, ‘The Grim After’ is a story of Essen Breaker, the Devil’s son. Essen is trying to pick up the pieces of his old life, reconnecting with his old friend Bren, and simply trying to be a better person. But in “Reaver” #11 he is forced to confront his friend Bren who is in charge of the gang of child abductors using working learned from his time in the military to harvest local children for what is essentially the ability to see into the future. While both Brel and Breaker have become jaded over their years of military service and the horrors of war they’ve both encountered, it has changed them in different ways. Breaker strives to be better, to keep those in his city safe, but Brel has become an opportunist. Brel has seen the horrors of the world, and because of this, decided to take advantage of it. The thing is that Jordan makes Brel a more compelling villain than a simple mustachio twirling fiend. There is a small amount of disgust in Brel’s dialogue, as he explains his horror at how easy it is to do the working for stealing the essence of children. He’s looking for an easy way to survive by trying to get ahead of the horrors of the world they live in.

Essen, on the other hand, continues to try and do good but in the attempt to save the children that Brel and his gang have been abducting, Essen only brings further death and destruction. The world of “Reaver” is a particularly dark one, there are endless wars, blood magic, the slaughter of innocents and Essen wants to break this cycle, but this mission seems to break him. If the schemes of Brel and his gang are the only way to survive, maybe the world doesn’t deserve survival. The thing is that Essen continues to fight, if for no other reason than to save the children. The action is the main highlight of “Reaver” #11 and Niko Henrichon does an admirable job capturing the speed of Rekala and the brute strength of Essen. Henrichon does a good job of making the pair feel in over their heads. Brel’s second in command is strong and ruthless, raining blows on Essen who refuses to fight back. But even as the second in command attacks Essen, Henrichon makes a point of showing him not break. A true monster of a man who can take abuse and still stand strong. The combat of the issue calls back to other issues in ‘The Grim After,’ where despite his size, Essen makes himself small and unassuming. Here he is a force to be reckoned with. Brel, on the other hand, is highly trained without needing to use the dark magic he’s peddling. Even with his advanced tactics, Rekala’s speed once again proves too much for her opponents.

It was also interesting how Henrichon uses color in “Reaver” #11. The issue uses a fairly monochromatic color palette, really using shadows to their advantage and relying on candlelight to illuminate the scenes. Because of this the occasional pops of the red coloring of Rekala’s hair, the scarring on the second in commands eyes, or the free-flowing blood contrasts with the tans and skin tones of the rest of the issue. It’s a little thing, but it helps to make the combat of the issue feel that much more brutal and impactful. The coloring is also used effectively at the end of the issue when Brel is confronted one last time by Essen and Rekala. The dark magic that Brel and his gang were making gave the user temporary future sight. The setting this time is more vibrant, utilizing daylight and when Brel is given a full dose of his magic, the colors dramatically change to red and white. A curse of seeing his oldest friend destroying him in a myriad of ways. The scene is intense and brutal, destroying what’s left of his mind. With a limited color set, Henrichon highlights the effectiveness and brutality of the duo.

“Reaver” #11 is a solid ending to the next chapter of Essen Breaker and Rekala, but one that asks an interesting question. After defeating Brel and watching the surviving children murder their tormenter, Essen seems remorseful. After the events of ‘Hell’s Half Dozen,’ Breaker wanted a quiet life and one where he improved his life. But despite his best efforts, death seems to follow the Devil’s Son. But to Rekala, the two are not mutually exclusive. While it’s true that death has followed Essen, his embrace of death has saved numerous lives. While he wants to be better, perhaps in the world of “Reaver,” good and bad might be a bit more muddled than Essen thought.

Final Verdict: 8.0 “Reaver” #11 is a solid conclusion to the series second arc with strong character work and even stronger stylistic choices in the color and lighting used.