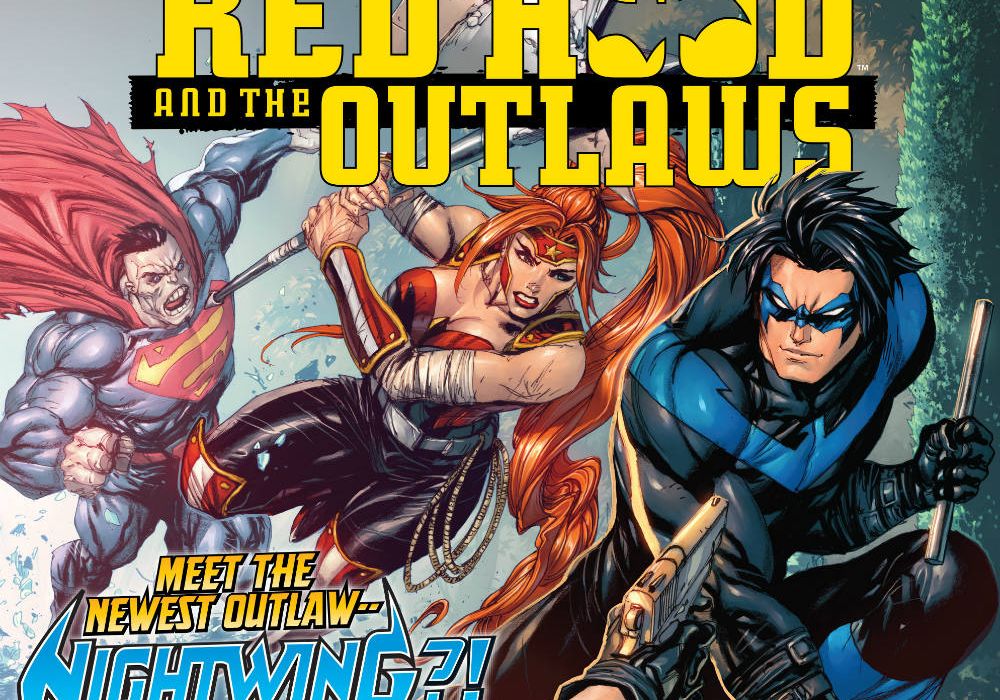 I love that I can soundly say the most surprising book of ‘Rebirth’ for me has been “Red Hood And The Outlaws”. Lobdell has upped his writing game considerably with this incarnation of the team, that seems to revel in it’s ridicuousness. So how does he far in this annual paired up with “Action Comics” artist Tyler Kirkham? Read on and find out! 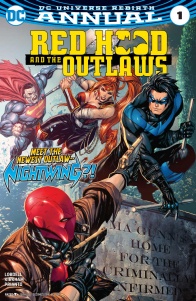 “Brothers in Arms”! When Red Hood discovers a new wave of criminal activity in Gotham City with a traveling circus at it’s epicenter, he recruits Nightwing t help the Outlaws infiltrate the big top! Can the two would-be brothers put their differences aside and crack the case? Or will their division be the harbinger of their demise?

I’d like to mention the obvious element of Nightwing’s inclusion, and his rapport with the Outlaws as a whole. Lobdell still shows that he has a good grasp on what makes his core characters tick – there’s a lovely faux-brother relationship between Jason and Bizarro that’s touched upon as Jason encourages Bizarro to chase after the girl he likes. So, when you throw Nightwing into the fold, it’s almost like a high school reunion that neither of them really wanted. There are some really nice moments between them, like when they both stumble over saying how they’d be willing to help each other out and Artemis pokes fun at their awkward interactions. But then Nightwing/Dick later pulls a ‘let’s blow this lame party’ and walks Artemis back to her trailer with her dangling off his arm, leaving the boys by themselves. I’d say it was a Dick move on his part, but it can’t be that because that would be out of character. To be fair, however, nothing happens between them and they end up talking about Jason in a nice, nostalgic kind of way.

I’m a big fan of how the KGBeast, or simply the Beast, is coming back into mainstream comics. Lobdell uses some nifty plot devices to make him a suitable threat to the Outlaws, having him come into contact with high-powered weaponry picked up from a plot thread in “Detective Comics”. While normally I’d be wary of these convenient plot points, it’s more of just a padding to unleash a high stakes gun fight, and Lobdell goes all in with it. This fight is well drawn out, with such solid pacing that there’s never a moment that lulls. Every element of the group gets a go at the Beast, but Lobdell never writes it so that they don’t have synergy – we’re watching a super team at full sync, which is refreshing outside of the rookie, mismanaged stereotypes. My only qualm is that there’s a lot of dialogue throughout the action. It’s not heavy, and doesn’t slow the pacing too much, but it does feel unnecessary at times and often describes what the reader is already seeing in front of them.

It’s great that Lobdell isn’t just treating this annual like filler material. As far as stakes go, it does seem to keep in tow with the rest of the series, considering the Beast who’s pretty much Batman tier, decided to power up with even more weaponry. Plus there’s some subtle character development here that only works thanks to the inclusion of Nightwing. Having this much pages devoted to the guest star’s issue means that Lobdell gets to flesh out his effect on the main cast. For one, Jason now feels like a more rounded character now that he’s come to peace with his adopted brother, and feels like a more capable leader of the Outlaws. Similarly, now that he’s acknowleged his history with Nightwing, he works better as a big brother figure to Bizarro – helping him with relationship advice and protecting him from the sneers of the outside world. All this adds a lot of weight to the issue that makes it feel really worthwhile.

A book filled with heavy hitting characters needs an artist with punch, and Kirkham is well fitted for this role. His character works is much what I expected for the most part, with most people looking glamorous and super fit – Jason and Artemis both look. This was a little jarring in one scene, where Bizarro goes after a girl that people are allegedly laughing at – Kirkham draws the girl with a model-like figure, with her only distinguishing feature being a beard that she keeps under a balaclava most of the scene anyway. However, I’m a big fan of how Kirkham renders Bizarro throughout the comic – instead of simply analogue-ing Superman, Bizarro is like an exaggerated Clark Kent/Hulk figure, making him visually feel sympathetic as Lobdell is trying to convey with him. There’s a panel where Bizarro is sitting next to the estranged girl, in which Kirkham has him look so comfortable and loveable – this is the depiction of Bizarro that I love, and it’s done really well here.

Kirkham brings incredible action scenes to the table – something consistent with regular series artist Dexter Soy. The double page splash that introduces the Outlaws in this issue is a great way of showing readers what they’re in for – Jason is guns-a-blazing riding through a flaming hoop on a motorbike, Artemis is horseback bullseye-ing targets at high speed, and Bizarro is fighting back prodding clowns whilst chained up. It’s all fantastical and whimsical, and is a great way to thrust readers into the action without getting too serious and grimdark. Jumping forward a bit, the Beast fight scene at the end is visceral and kinetic to read. Kirkham’s figures are constantly mobile like the book’s pacing – never is there a dull moment, never do his figures fall into action figure-like stiffness. Instead, the action is fluid, starting with the Outlaws first diving into deep, freezing water (the fact that Kirkham can make water look cold without telling us is a serious talent). In the thick of the fight, the Outlaws are always coming at the Beast with inventive choreography, my personal favourite being Jason shooting bullets reflecting off Artemis’ sword to hit the Beast. It’s really fun action that doesn’t feel boring.

Arif Prianto has a good grasp of the moody color palette the Outlaws love to rock, which can be a good and bad thing. Scenes like the circus page splash and the Beast fight all pop with incredible vibrancy, with lights blazing and costumes shining like the bravado of the heroes sporting them. However, the middle act feels a tad muted – as I said, in line with the house style of the Outlaws, but it just makes for less compelling reading. Any book that has an Amazon, a gun-toting former Robin and a Superman clone battling at the circus deserves to look as fun as it sounds, and this section just feels a little too moody. Especially considering most of this centres around the some really touching content like Bizarro finding love and the former Robins rekindling a bond. There is one scene I love at the end, however. It’s a small one, but when Jason and Dick shake hands, their bodies are silhouetted except for their respective masks, and this feels rewarding considering the character development throughout the issue.

“Red Hood And The Outlaws” Annual #1 continues the fun streak this series is on. It’s a chapter that feels just as good and important as the main series, with great character moments. There’s a few slip ups in terms of voice and character depiction, but overall I’m happy to say I can see this as a high tier book of Rebirth at the moment.

Final Score: 7.4 – A touching reunion and some great action-oriented artwork make this Annual one to remember.