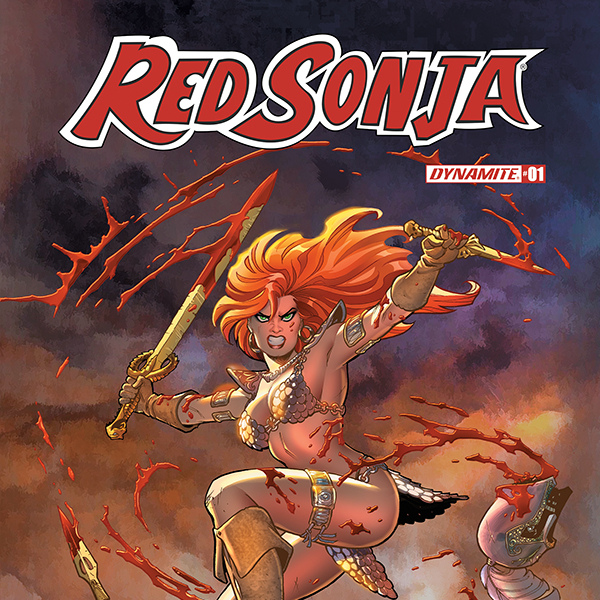 Telling a quality Red Sonja story is a difficult task for any creator. Author Mark Russell and artist Mirko Colak are the two latest creators to take on the character. Sonja’s brutal nature and status as a feminist icon will prove difficult for any author or illustrator to portray. Russell is required to give a framework of a script that allows for Sonja to be portrayed as both a hero and an icon. Giving her an incredibly complicated backstory and characterization would undermine the hero as a whole. Also, how will Russell, an author known for solid humor tell a narrative centered around a Conan-esque action hero? What elements will artist Mirko Colak bring to the series? 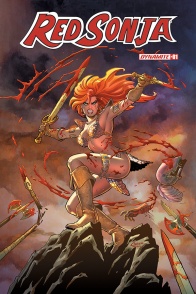 No man knows the place of her birth, nor where she learned to wield a sword to shame many a male. They know only that she is called The She-Devil of The Hyrkanian Steppes. That, and RED SONJA.

MARK RUSSELL (The Flintstones) and MIRKO COLAK (Conan) bring a savage tale of metal and blood. A world conqueror possesses a massive army and a fatal prophecy. A bastard sorceress craves revenge. And a fearsome red-haired warrior is made wartime ruler of a homeland set for decimation.

Readers have seen lots of Red Sonja debuts over the past couple of years. However, Russell and Colak’s incarnation of the character has just enough elements to stand above the pack. The creators infuse an odd element of dour humor lending a great sense of characterization to the script as a whole. Russell lends a backstory to Sonja, establishing her characterization, quickly placing her outside of a traditional status quo.

Russell devotes a significant portion of time fleshing out the villain for the series. Dragan the Magnificent is not a worthy physical opponent for Sonja, but the gravitas and aura surrounding the character rivals Sonja’s own reputation. The way Russell depicts the stone cold nature and demeanor of Dragan is the main appeal of the issue and a showcase as to what Russell brings to a “Red Sonja” comic that other writers would not. Sonja’s speech towards the end of the issue is a definitive bright spot for the tale. Her sense of restrained humor is wonderfully juxtaposed with the action of the story itself. The sequence also lends a lot of personality to Sonja that she isn’t characterized within other stories.

“Red Sonja” implements lots of the elements from Russell’s previous work like “Prez” which also told a story about royalty and “Flinstones” which carried some of the same genre elements thanks to the setting. However, there is a still an action story nestled within the issue. The tale also has a great momentum teasing that a couple sweeping action sequences could be coming in future issues. Due to the brisk nature of the plot and the wild tone from Russell, it is going to be interesting how the writer will tell future stories once this plot is resolved.

Mirko Colak’s art can be a bit loose and unwieldy at certain points of the issue. Colak’s figures have a bad habit of staring at the camera without expressing. In certain sequences, there are good, sarcastic expressions but too seldom are characters drawn with no expression on their face. The panel composition from Colak is an asset to the art. There is a page focused on an object that zooms in on the most important of the panel and the reaction from Dragan in a really impressive manner. The unconventional layouts and action sequences are a great asset to the action sequences.

At the end of the story, Russell’s script pushes both sides of the story towards a big confrontation. Russell does a great job introducing both sides of the conflict and adding enough story and character for Sonja and Dragan to come across as interesting and likable. Dragan’s ambitious, tough personality is a great selling point for the issue overall. Russell’s script has a great rhythm and pacing.

Reading a “Red Sonja” comic book with a greater focus and direction is a thrill. Russell has brought a humorous element to the story in a way other creators wouldn’t. Despite the fact that Sonja is an action hero, Russell is still willing to put a comedic twist on the property. Colak’s cold facial expressions are supplemented by strong action sequences. I hope in future issues, Colak will start having his figures show more emotion in the narrative. Russell has also created a unique situation for Red Sonja that gives her motivation without adding too much baggage to her character. The issue is a strong showcase for how “Red Sonja” can be applied and adapted to different types of stories. The issue is a great showcase for Russell’s writing style can function in so many different contexts.

Final Verdict: 7.8 – “Red Sonja” #1 is a unique, intriguing take on the character that sets up an endearing antagonist.