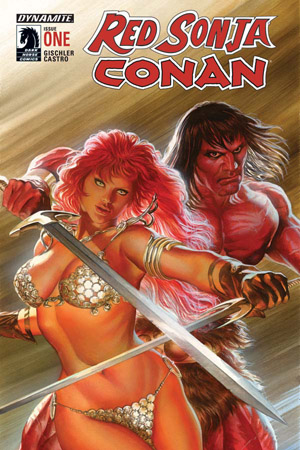 Red Sonja and Conan the Barbarian are reunited! For what purpose? Uh, to kind of do what they always do. Murder, bloodshed, some light second base. Check out our review of “Red Sonja/Conan” #1 below! 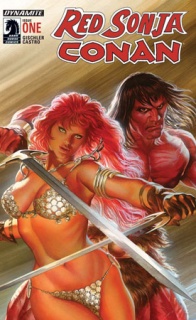 Red Sonja and Conan are reunited as captains of mercenary companies who team to fight the forces of an evil sorcerer. Little do they realize that a shadow of the past has returned, something of dire peril from their previous adventures together. It’s the Cimmerian and Sonja reunited for more bloody swordplay!

Writing about swords & sorcery comics is weird, if only because they’ve been done to death. There’s the tropes that define these types of stories- armies going to war for vague reasons, a weak mage the warriors have to tear apart, breasts – and “Red Sonja/Conan” #1 (or “Sonjan” for convenience’s sake) sticks to them pretty tightly. A court wizard, actually a herbalist, has stolen some magic seeds for his plan and has decided to go after Red Sonja and Conan because a blind dude told him they would stop him. Maybe they would stop the wizard because he went after the two in the first play. It’s like this guy’s never seen a Greek tragedy.

While there’s nothing wrong with indulging in the classic Red Sonja and Conan tropes, it would be nice if they didn’t feel so assumed. While I do like the idea that Sonja and Conan are just going to armies and taking over for the pure sake of money and glory, a little context would go a long way towards explaining the connection between the evil herbalist and the army Sonjan is raising in the Kingdom of Kush. Wait. Oh my god.

All tokes aside, I am genuinely struggling to think of anything in “Sonjan Stevens” #1 that really stuck out to me. Robert Castro’s art is kind of sloppy, with character’s faces sometimes looking like anything but. There’s not of a flow during fights, robbing them of any weight. Like during the two inset panels located next to Sonja’s stand-off with a bigger dude. In the inset, one warrior is just running(?) across a red background before getting a knife thrown in his back. Who did that? Conan was busy decapitating some dude and Sonja is taking care of some other scrub on the same page. If the violence is meant to be the selling point of this comic, it fails to deliver anything that feels visceral or exciting.

That said, I do like how when Conan and Sonja begin to get busy, they’re sitting on the bed kissing like they’re high school seniors on prom night. You’re two of the deadliest warriors in Kush. Use some tongue, dammit.

Frankly, I truly am having a rough time recommending “Sonjan” to anyone as it just feels so devoid of personality. Gail Simone in particular has been writing a pretty in-depth version of Sonja and a tiny bit of that shines through here though. Unfortunately, the cast of characters assembled in this comic feels more like a really tired LARP group. If you had a gun to your head and were asked to write a swords & sorcery comic in five minutes, this is what you would have produced. There’s the wizards, the swords, the boobs, and just the barest amount of thought needed to avoid having your head blown away. That’s what I think happened here. I think Dynamite tried to kill some of their employees.

Final Verdict: 5.0 – In all honesty, “Red Sonja/Conan” #1 isn’ as bad as I’m making it sound. It’s problem is that it is exceptionally mediocre. It’s cliche after cliche with not much else to offer. And there’s certainly an audience for that. For those comic readers looking for something new however, “Red Sonja/Conan” #1 fails to deliver. Now if it were entirely about the fearsome duo fighting an evil herbalist powered by that ganja? Now that’s something I would read.