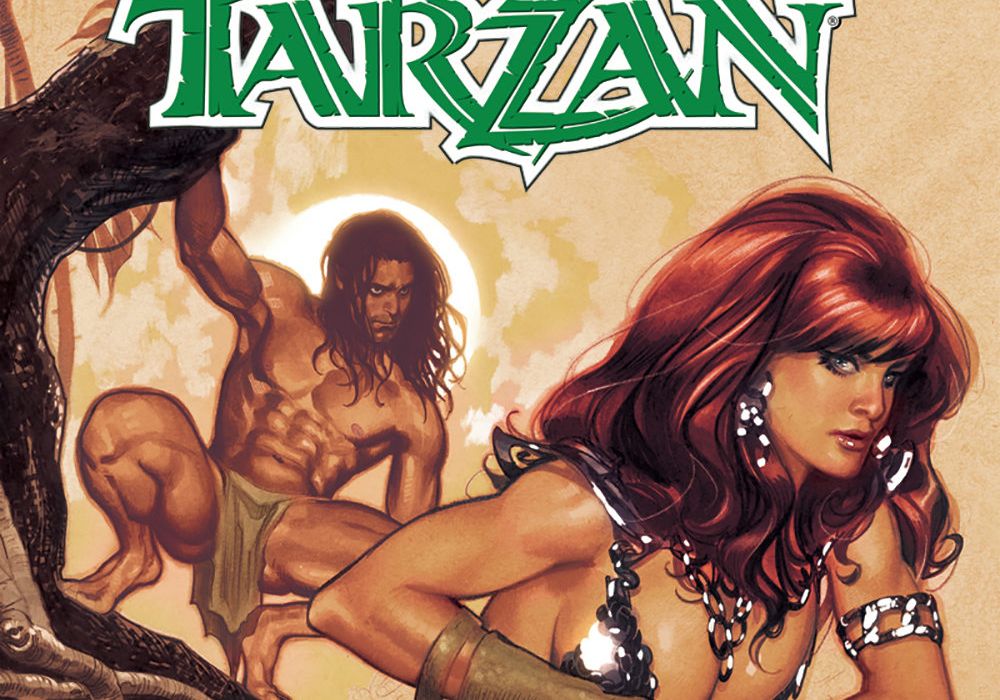 Dynamite has had a habit of pitting their heroes with other licensed heroes in big bombastic crossovers. The past sees Wonder Woman with Conan the Barbarian, The Shadow and Batman himself, and plenty more. And then, along came “Red Sonja/Tarzan” #1. What caught my eye was that these aren’t characters that necessarily scream crossover potential. Yet the creative team of Gail Simone, Walter Geovani, Adriano Augusto, and others tell me that this could be a sleeper hit. Let’s see how this mash-up fares. 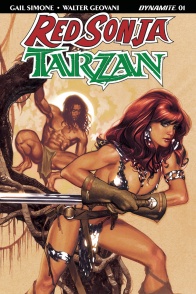 The She-Devil with a Sword meets the Lord of the Jungle!
Eson Duul is an evil man. The mere mention of his name makes powerful quake with fear. He has no regard for life, including that of man. But he may finally have met his match when he finds himself up against Red Sonja and Tarzan!
Gail Simone (Birds of Prey, Red Sonja) and Walter Geovani (Red Sonja, Clean Room) reunite to bring us the crossover event featuring two of fiction’s greatest heroes side by side at last!

The first and foremost goal of crossover comics like “Red Sonja/Tarzan” should be establishing both characters and connecting them in a way that seems plausible, seamless and entertaining. In this case, the two protagonists are reunited through a common enemy, the time travelling Eson Duul. We learn about how this grim, Victorian menace has scorned and shamed both Sonja and Tarzan throughout the whole issue. It does mean that we get less actual team up between the two heroes, but I found myself more prone to enjoying this formula more, as it helped me familiarise myself with the two heroes and their motivations more. Spending time with Sonja, we learn she is shamed as Duul took her fighting braid, her sword, and judged her based on her gender, something which now feels more relevant than ever. Spending time with Tarzan, we found out a lot about his dense pulp history, about how he now lives as a man with the name John Clayton, Lord Greystoke. It’s something I wouldn’t have known should the narrative gone straight to clashing the heroes together. It not only eases the reader into each respective world, but also works as a selling pitch for both series: interested as to why Sonja is so prideful/Tarzan is a Lord? Go check out their own works!

Simone is renowned in the industry for great character work and development, and she handles both characters deftly with respect to their history and mainstream regard. Simone has worked on Sonja significantly in recent history, so there’s no surprise that she comes off as a fierce female protagonist, one capable of balancing rogue-ish delight with heavy gravitas. It’s great that Simone displays her fall from grace in the comic so that newer readers get a sense of how her character works too, and it’s a swift method as to giving her a solid motivation and a sense of development. What I find interesting is Simone’s work with Tarzan. To my knowledge, Simone hasn’t had much experience with this character, yet what we get here is a completely different entity than what I was expecting. Simone’s Tarzan is a proud, yet humble giant, fluent in proper English, and who balances careful control with justifiable mood shifts. For as much as Sonja is shamed in her own period, Simone’s Tarzan is a tragic figure here, as Duul shows him around a zoo in which animals, some that Tarzan knows personally, are chained and beaten, before later sending him a dismembered Elephant hoof remodeled to use as a ‘brolly’ holder. Simone elevates Tarzan into a complex figure, one that holds an air of dignity yet still retains the primal rage burning within him.

One thing I’m not completely sold on, is how much dialogue is used in this piece. I will start off with the positives first, because I’m always glad to be positively swayed by use of omniscient narration. The narration does help ease the readers into the world as I described earlier. Given that Simone has only used an issue to introduce readers to each character’s lore and history, it’s forgivable that she uses a few blocks of dialogue here and there. I don’t mind when used to introduce Tarzan because it builds up to his appearance with grandeur, and brings us up to speed with his complex character arc. However, it does feel a little grating when used to describe actions already portrayed on the page, in a story that is already fairly heavy with word balloons. I don’t think that we need to know how Sonja would have spared two mocking strangers if they hadn’t gotten drunk, as Geovani renders it well in the art already. I also feel that we don’t need external dialogue describing Tarzan’s sorrow at seeing his friends trapped, when the art displays it expressively with the weak drop of his hand.

Moving onto the art, Geovani is a more than serviceable crossover artist. He has a style suitable to render the high fantasy, fast paced action of Sonja’s era, and brings a formality and regal air to Tarzan’s era. The blend of these two styles actually works great at introducing the antagonist, Eson Duul. From the first panel, we see him riding at the head of a pack of horses, with a relaxed, composed posture, and sinister tone to his expression. Yet, we see him the next following page disembarked from his horse, and getting low like the best of them to shoot down a Tazmanian Devil in cold blood. Sometimes this blend of formality and action doesn’t work as well, however. The next two pages, we see one of Duul’s lackeys, the threateningly-named Carl, languidly punch a fully-grown man off his feet and send him a few feet away. It’s a jarring visual clash to see this man so relaxed and rather weakly swinging his fist over, and then seeing the victim react so extremely, something which is prone to happen as the result of Geovani’s stiff body framing.

What Geovani does excel at is giving these characters some gorgeous backdrops to play around in. There’s a huge range of settings that all feel distinct and intricately rendered. The first sequence features an Australian forest in 1921, packed with dry bush and stark gumtrees, yet still feeling full of life with creatures frolicking in an outcrop. Then we get the burning deserts and bustling towns of Hyrkania, with the city feeling packed, claustrophobic and lived in. The most striking and beautiful is Duul’s manor outside of London, which I feel works the best because of how Geovani angles the shots to accentuate its beauty and the character operating within it. The first panel shows a wide pan of this manor itself, with all gothic charm and surrounding vegetation. But the scene which really stands out to me is when Tarzan strides out onto the page. The camera shoots from bellows, giving us a great view of the gently clouded sky, the light bush, and the well-positioned lion statue at the back of the scene. It works as great setting placement that doesn’t feel arbitrary but doesn’t distract from the focal either.

Adriano Augusto handles coloring, and across the board it’s somewhat inconsistent. There are some great shots that are enhanced by Augusto’s warm, gradient coloring and shading. Every shot in Duul’s manor looks the epitome of charm, with a warm, dusk palette enhancing every gothic and quaint aspect. However, it clashes when Tarzan visit’s Eson’s zoo, which is a mostly green palette. The warm coloring doesn’t mix with the muted greens of the vegetation in the area, creating a muddy and queasy feeling. It does work tonally in that this is an unpleasant place, but it just looks like an unfortunate paint-mixing accident. There’s also a lot of airbrush shading on faces, which instantly dates this to looking like a comic from the early 2000’s. It’s not too bad in longer, wider shots, but in close-ups like Duul’s assistant explaining his motive, it gives her a otherworldly gloss, looking more plastic doll than human.

“Red Sonja/Tarzan” #1 conceptually feels like a round robin match-up, seemingly having nothing in common, but Simone does a great job at pairing up the two heroes against a valid and sinister foe. The art is a little static, but Geovani does a great job at painting environments, and Augusto brings them to life in a warm, nostalgic glow. If you have any passing interest in these characters, check this book out.

Final Score: 7.0 – “Red Sonja/Tarzan” #1 is a crossover done well, with Simone delivering exceptional character work, and the art team of Geovani and Augusto doing a serviceable job with a few minor inconsistencies.