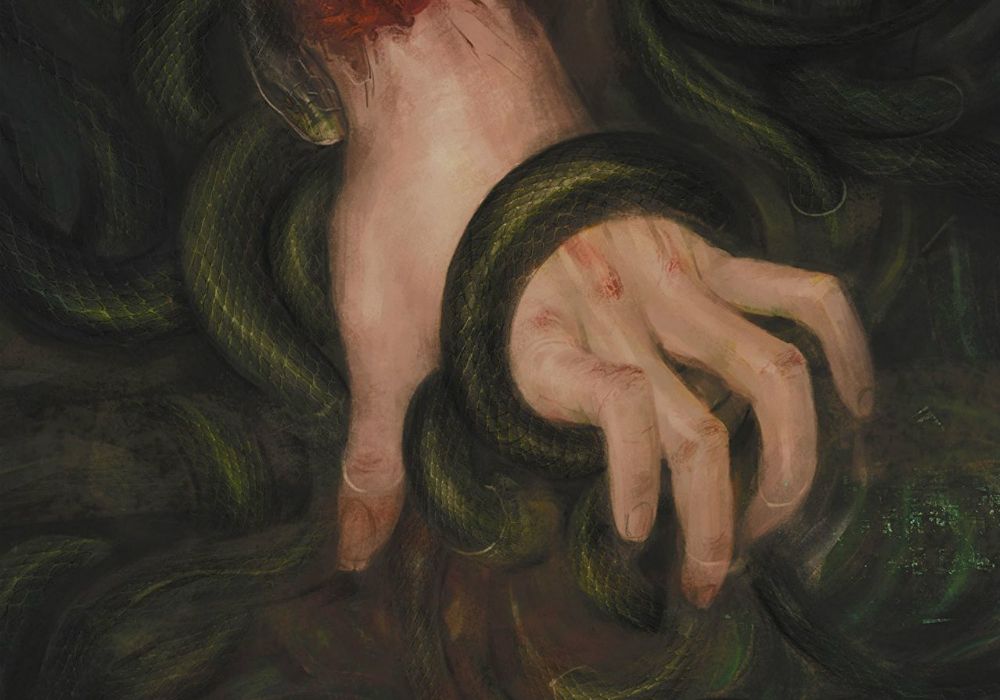 It’s a tense stand-off between the police and an almost unseen horror in the debut issue of “Redlands” – read on for our review, which contains minor spoilers 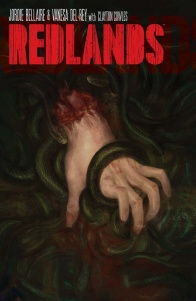 A brand-new horror book from the minds of Eisner Award-winner JORDIE BELLAIRE (PRETTY DEADLY, Vision, Batman) and critically acclaimed artist VANESA R. DEL REY (ZERO, Scarlet Witch, Constantine) brings you to the sleepy, sunny town of Redlands, Florida. The police are failing to maintain control of their old-fashioned town, and a coven of killer witches plan to take everything from them. This summer, hide your bibles.

To say “Redlands” #1 simply throws you right into the centre of the action feels like an understatement. It would be more appropriate to say that “Redlands” #1 presents you with the best moment of a classic horror movie, cuts away everything else and just starts the series there. That unforgettable scene that you talk about for days after leaving the movie theater; that climactic, tense, final confrontation that is both the payoff for all that came before and the perfect encapsulation of the entire experience; that’s where “Redlands” #1 begins.

The issue centers around a thrilling stand-off between the small police department of Redlands County and a largely unseen force, one that has a group of trained law enforcement professionals absolutely terrified. Much like the officers themselves, there’s no escaping the horror, no cutting away to other locations or times, as the entire issue takes place in this one moment, occupying the same space of time it takes you to read the issue. This gives the issue a tense, urgent, reality as you see the desperate situation fall apart with frightening speed.

It makes sense that color is a defining aspect of “Redlands” #1, as superstar colorist Jordie Bellaire not only debuts her substantial writing talents with this series, but provides the color over Vanesa R Del Rey’s linework. The main light source for the issue comes from a burning tree in front of the precinct, from which hangs 3 flaming, empty nooses. This palette of red, orange and yellow casts dramatic shadows across every page and gives you the same stifling claustrophobia felt by the characters as they assess their decreasing options. Later in the issue, there’s a power cut in the building – because of course there is – and the lack of light, the lack of color leads to a very real sense of the shadows playing tricks on your eyes, which is impossible, yet the feeling is there nonetheless. It’s the combination of Del Rey’s scratchy, almost indefinable background details and Bellaire’s conservative use of color (the deep red of the emergency lighting drenching what little that can be made out in a horrific hue) that makes a creepy scene truly scary.

There’s an inclusion of lettering in the artwork that makes each occurrence of its use really stand out. Gunfire, blood splats and screams present as sound effects almost tangible to the scene itself, a stylistic choice that gives a fun energy to every panel it’s used. Clayton Cowles makes the lettering part of the moment in a way that both stands out but also compliments the art perfectly.

“Redlands” #1 is a drama, an action scene and, by the end of the issue, a gleeful tale of empowerment, but make no mistake: where this tale sinks its teeth into you is in its moments of genuine horror. There’s very graphic, visceral gore on display that leans into the supernatural side of the issue, but all of the attacks against your emotions come from a very human place.

The Unknown clearly leads the charge against your primal fears, the issue making full use of the “in media res” nature of the narrative to catch the reader on the back foot in terms of fully understanding what’s outside trying to get in. The supernatural element also ensures that the enemy is not only laughably underestimated by the cast, but wildly unpredictable, unrelenting and adaptable as the narrative twists and turns.

The real assault, however – the battle that “Redlands” is really fighting – is against the establishment. Here, in this issue, that takes the very literal form of the predominantly white, male police force, but by the end of the issue, when the threat of the issue stands gloriously revealed, it’s clear that the fight is against not only the patriarchy, but all forms of establishment or oppression – if that wasn’t clear in the narrative, Bellaire, Del Rey and letterer Clayton Cowles cap the issue with a declaration of intent stating as much.

“Redlands” #1 begins where most other horror films end, and that’s an exciting, unpredictable way to begin a new series. The plotting is tight, the voices real and the emotions fully realised, and while the pacing of the issue is so fast as to make it hard to find time to dive deep into any one character, there’s enough here to grasp what these people are about; a testament to the economy of Bellaire’s script. Del Rey’s layouts are cinematic in scope, using classic horror angles and providing real dread in the page turns. The scene where the lights go out is the most effective of the whole issue, a lone police officer down in the basement with the prisoners and something much, much worse. overall, “Redlands” #1 is an unmissable horror debut.