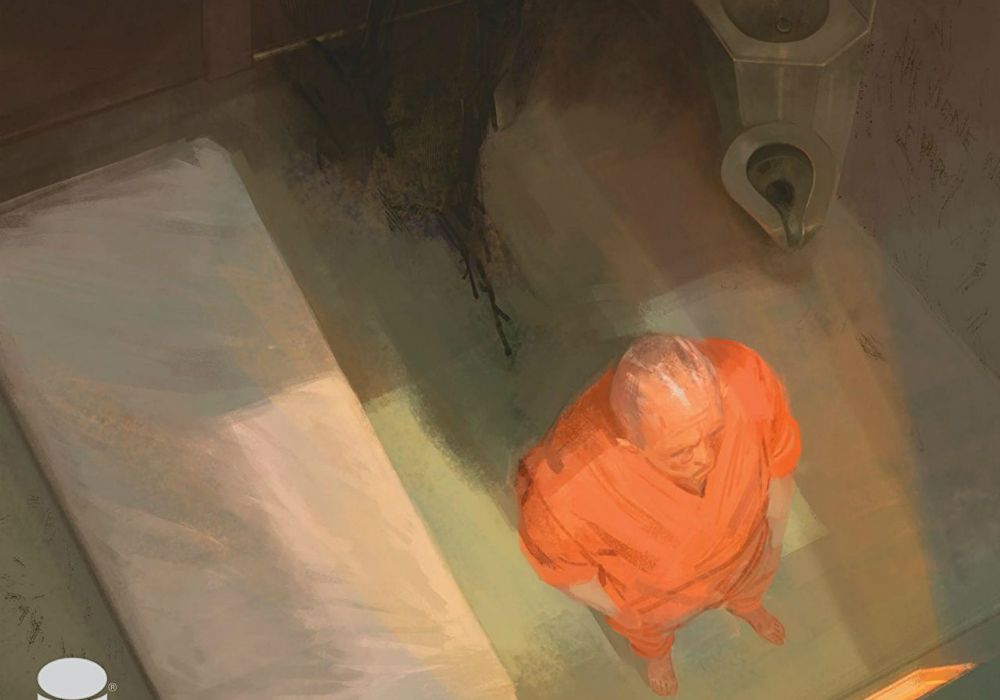 “Redlands” continues to be one of the most forward-thinking and provocative comics on the stands at the moment. Bellaire, Del Rey, and Cowles have become a tight-knit team over the last ten issues, delivering a comic that serves as a cultural awakening as much as it is a classic horror tale. Let’s see how the latest issue fares as we see plot threads come together. 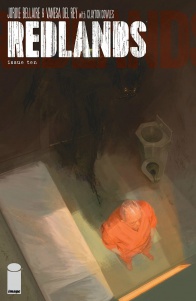 Redbrandt returns to Redlands while the witches are away. Meanwhile, Nancy discovers the whereabouts of her father and the Devil’s plan finally comes together. Which is bad news — for everyone.

Bellaire explores a lot of hard-hitting themes in this issue, showing that even plot-driving mid-arc chapters can have revelatory moments of their own. The start of the issue opens with a flashback to the witches destroying the Redlands in 1977, in which we see the immediate fallout of their actions. We see the Ro, Bridget, and Alice conversing like sane folks, in which Bridget speaks a resonating line which might define the rest of the chapter, if not the series as a whole: “Men don’t like women.”. Following on from that, Bellaire cuts to Laurent and Itsy talking about the nature of their supernatural powers, and the question of reclaiming agency and identity. Itsy struggles to define what she is as the child of a human and a “strong and ancient being”, trying to figure out her place in the world whilst also struggling with aging unnaturally slowly. In the final scene, we also get to see Nancy in Bridget’s body start to be more comfortable with herself, and exude more confidence than ever before. When Nancy admits to being comfortable with visiting her destructive father, Casey tries to drag her mood down to his mopey level. Nancy catches him, however, calling him out for attempting to direct the conversation to his own problems and for lying to her about his own crimes. It’s a great moment of development as she speaks out unafraid, making readers want to stand and cheer her on.

Bellaire keeps the lingering tension around to remind readers that yes, this is still a horror title. For most of the issue, it’s subtle. The first scene has the witches wondering what has happened to the prisoners of the jail they burned, while we see a mysterious, concealed figure watching behind debris to keep us uncomfortable. We move then to the next scene, where a similar trope is used. Both the witches and the pair of Nancy and Casey are holed up in a cheap motel for the night, and their two scenes are bridged by a shadowy man well-dressed in a suit lingering in the dark and smoking a cigarette. We never fully learn what his place is in the story, yet the fact that he is there at all serves to keep readers on their toes. Bellaire lets the horror tones come full force by the end of the issue, however, as we watch Z get stuck in a power outage whilst in the shower. We see him walk out into the bedroom, looking for his bedpartner Cass, only to find her held at knifepoint by the supernaturally-powered Redbrandt. Bellaire keeps the tension high in the buildup to this scene by having the setting be completely silent when the power goes out save for Z’s incessant calling.

Vanesa Del Rey proves still to be a one of a kind artist in the modern industry with this issue. I found that throughout the story a lot of the setting and environments tend to be sparsely populated. Almost empty save for the main or important characters. Yet it doesn’t feel unrealistic, nor does it take you out of the story’s immersion in any way. It serves as a good way to build tension, as the scenes are so focused that it echoes the sentiment of a prose work never having an unnecessary word in its ranks. Del Rey delivers scene setting but leaves it empty so that any characters inhabiting these environments feel exposed and vulnerable.

I love how dynamic the paneling feels at times. Del Rey has good control over this to make readers feel like we are winding down or ramping up to an important scene. With the opening scene showing the wreckage of the Redlands massacre, Del Rey leads with a top-down splash page. Following that, Del Rey uses diagonally placed panels to give a sense of disorientation and confusion to the reader. At the end of the issue, Del Rey uses this again, but in a forward facing direction that gets interrupted by opposite-facing diagonals in the climactic page. It feels like tension is ramping up as Z exits the shower only to find his lover at knifepoint.

Del Rey’s use of body language is really solid here, too. This is perfectly shown in the scene between Nancy and Casey, using the backdrop of the TV describing the oncoming storm to display moments of intimacy. At the start, when Nancy explains that she is feeling confident, she’s looking relaxed on the bed: drink in one hand, the other placed on the covers behind her, and her body leaning back with dismissal. As the conversation continues, and Nancy finds out more about Casey’s dark past, we start to see her become more defensive and protective. Her hand once leaning on the covers now moves forward with her, perched on her leg in concern, and her drink-holding hand has now wrapped around her stomach as well. It’s clever posing that shows emotions and body language as good as any top-tier actor can.

Bellaire’s colors here continue to be faded, moody and outstanding. I love how a palette can shift from scene to scene and give us such a strong, immediate sense of tone. The opening scene is smoky, grey and miserable, appropriately so considering it takes place in the aftermath of a massacre. However, we soon shift to the opposite. The scene between Itsy and Laurent is set at a bright, vibrant twilight. Bellaire paints the sky a warming, friendly orange as she tells in the narrative of Itsy coming to accept her place with Laurent as family and it feels super appropriate. Bellaire’s use of a predominantly blue palette in the final Z scene is really solid, also. The use of having it intermingle with inky black backgrounds shifts to convey terror more potently as the scene goes on, and is a big part of the scene’s horror-tinged execution.

“Redlands” #10 continues to be a superb comic created by professionals at the top of their games. Bellaire weaves interesting characters and tight, focused tension superbly, while Del Rey uses scarcity in environments and dynamic paneling super well, on top of having a superb grasp of emotional body language.

Final Score: 8.9 – On its tenth issue, “Redlands” shows no signs of slowing, with great character moments and tightly choreographed art.