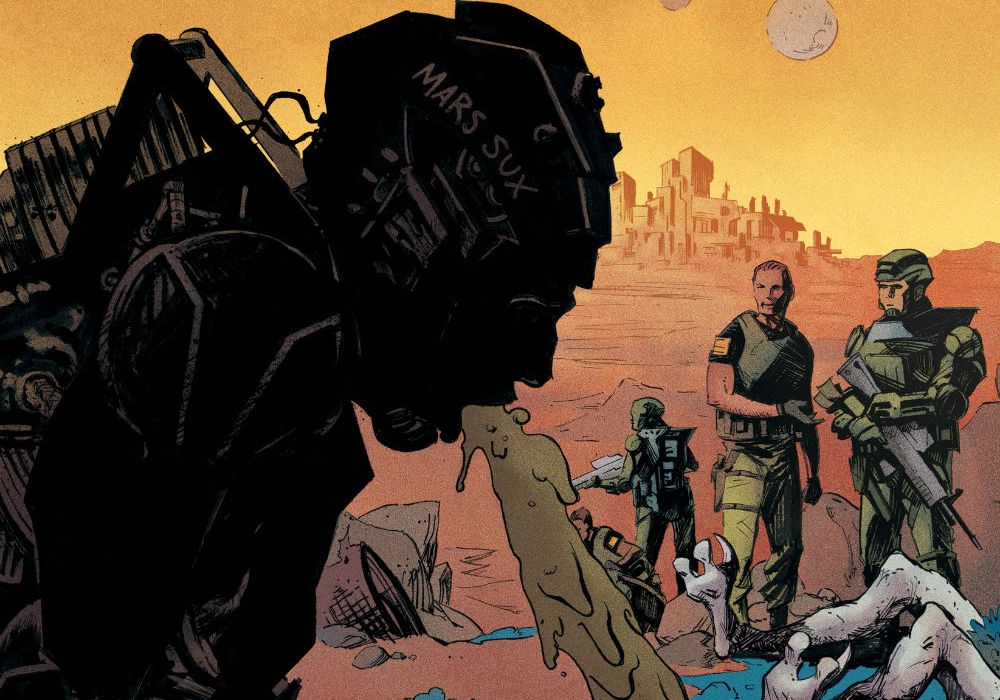 So we’ve colonized Mars. The Martians are pissed. And now they’re planting bombs in our tenement colonies? Can’t everyone on the red planet just get along? Creators Neil Holman and Clayton McCormack don’t think so, and now, the only man between peace and all-out-war is a hungover lout who stumbles across the bomber by chance while taking a dump behind some space rocks. Will he bring order? Will hilarity ensue? 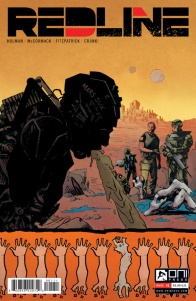 MARS. The near future-ish. A bomb takes out a city block on Harrison Station. The media rush to blame the local terrestrials (re: aliens), however Superintendent Denton Coyle has a feeling that it may not be so simple… or maybe that feeling is Coyle’s hangover gut bomb. It’s unclear… like a 50/50 shot, it’s a mistake or explosive diarrhea. Maybe it’s both? In other words, it’s yet another Tuesday on Mars.

This tale erupts with a literal bang, and follows the efforts of one grizzled investigator on Mars trying to uncover the truth behind an alien terrorist plot… even though everyone else would prefer it just remain hidden.

Any appreciation of “Redline” #1 will depend on whether you find any humor in the scene where Superintendent Coyle discovers his first lead in this case while trying to move bowel: Neil Holman drops a mine-field of F-bombs over a few pages and Clayton McCormack pencils the man, pants down, in all his swinging, full-frontal glory. If the purpose of any debut issue is to set up expectations for the series, then that will make for as good a barometer as any.

Taking a break from his day job as Archer’s art director, Holman has made sure to separate this comic from the existing sci-fi herd through a crude vein of black comedy. Whatever your take is on that style, it’s hard to say it’s not effective, because on that hook alone, this one is going to stand apart from all the other space and aliens books out there.

And for as much as it toes the line of offensive comedy — fittingly enough, it pushes that line into the red when it comes to mean-spiritedness, just ask Scurvy Dave — it plays as a fairly grounded sci-fi tale. Yes, Coyle and his team are on Mars, but as it’s being set up, it feels closer to a military procedural taking place in any number of turbulent, politically hot, and particularly sandy locales back on Earth.

I’m impressed at how quickly Holman jumps into the narrative. Too many first issues get so wrapped in backstory, exposition, and introduction that the only time they feel like there’s any forward progress is in a final page splash that finally kicks off the overarching story. “Redline” #1 easily could have decompressed its opening scene, and followed the Harrison Station disposal crew on their rounds for the entire page count, before closing with them being blown up or with Coyle surveying the devastation post-blast. Instead, Holman blows them all to hell before we really get a chance to get our bearings. This gives McCormack a chance to let his art splash across a two pages as he makes a knotted mess of downed power lines, twisted girders, and concrete rubble ringing around the explosion crater.

Lining the bottom of that image are six talking heads from the media providing the necessary geopolitical context in that standard trope where one pundit’s sentence leads into another’s leads into an interviewee’s leads in Holman and McCormack cutting the bottom out of that whole trope entirely. The panel cuts to Coyle, who simply belches into the camera, before adding, “The investigation is ongoing. We have no other comment at this time.” The abrupt crassness, and the fact that he has nothing of value to add to the conversation, seems to imply how little the creators think of this cliche. It’s a clever little moment that both utilizes and subverts the technique to great effect.

It’s also a great introduction to Coyle. Those two panels tell you all you need to know about him: he’s a lot rough around the edges and, once composed, he’s professional, or as close to it as a crass pragmatist can come. His only criticism of a team member sleeping with one of their corporate employers is the likelihood of it becoming a source of information leaks to the press, granted he does phrase it a lot more colorfully.

Holman effectively develops him as someone who’s great at what he does, despite being a hungover, surly mess: if he ever sobered up, he’d probably have a much better job, but be a lot less fun. As blunt as he is, Coyle’s been given a voice that’s both unique and authentic to his characterization. So when he chastises someone for their bogus take on the bombing, “That is the dumbest — ya can’t even call it a theory – dumbest whatever, bag of shit? It’s a big, dumb bag of shit Peck… Go change your diapers,” it’s got a cadence that just sounds real.

McCormack’s art is scratchy and slightly reminiscent of Sean Murphy: lots of staccato lines to give the impression of weathering and motion. He’s got more than enough grit to capture the rugged boulders of the Martian landscape and the rough, unshaven edges around Coyle and his team. There’s nothing too flashy, but it serves the setting, the people, and the subject matter well. That being said, McCormack sells a number of the issue’s comedic beats through his skill at reaction shots, obscene hand gestures, and facial expressions: case in point, the four faces of Coyle circa-bowel-move.

And like that, we circle back to the barometer mentioned earlier. This series definitely won’t be for everyone. But it’s great to read a sci-fi comic that feels like it has a voice of its own. I haven’t actually laughed at one since Chip Zdarsky shot the funny into space in “Kaptara.” And where that series relied on giddy irreverence for laughs, Holman and McCormack’s work taps that bleak, nihilistic vein that’s served FX comedies like It’s Always Sunny in Philadelphia, The League, and You’re the Worst so well. But that makes perfect sense, coming from a member of the Archer family