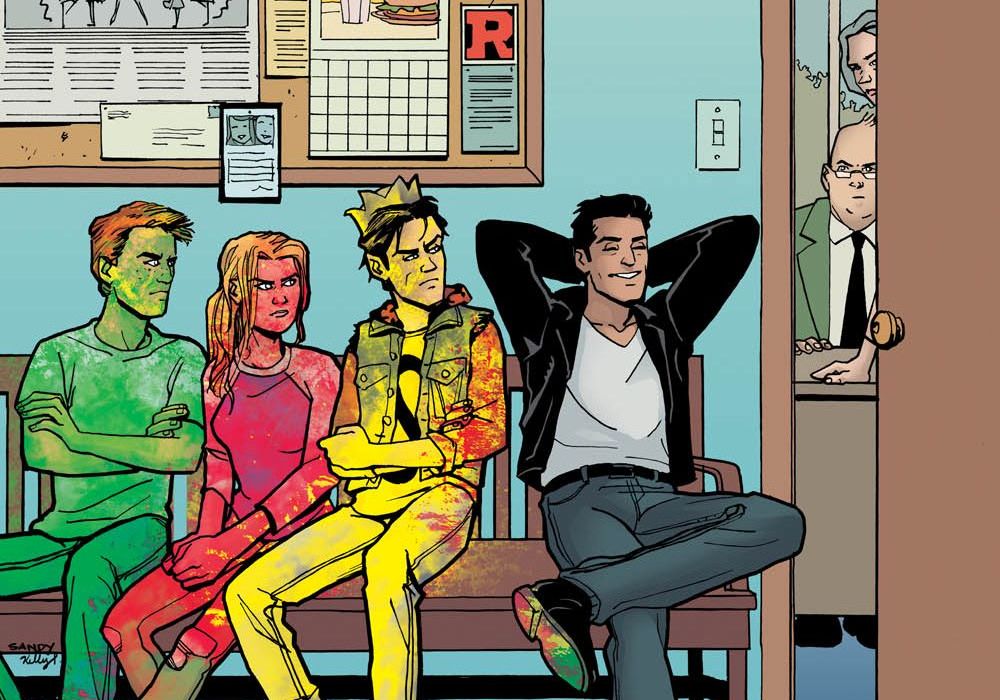 The Archie reboot has been taking the slow, steady pathway to establishing a full line of titles. With Archie, Jughead, Betty, and Veronica all headlining their own books, it was only a matter of time before Reggie Mantle, the Lex Luthor to Archie’s Superman, got his own series. C’mon villain books have never been hotter! Keep reading for our spoiler-free review. 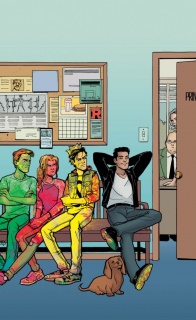 There is no one more loved, revered, admired and adored in Riverdale than… Reggie Mantle? Well, at least Reggie doesn’t think there’s anyone as loved and admired as himself. And his best friend can back that idea up—his best friend, of course, being his dog, Vader. The unstoppable duo is known around town for pulling the funniest pranks, getting the hottest dates and throwing the best parties. And if anyone even dares to compete with them, there is going to be hell to pay. Come take a look at the life of your hero, the handsome, hilarious Reggie Mantle.

I am not even close to being an Archie expert. In fact, before my pal Chad Bowers came into my life, I had never read an Archie comic, even while waiting in line at the supermarket. It just wasn’t a part of my life, so a lot of what I know about Archie I know second hand, or have learned in the last couple of years.

But even I was aware of Reggie. In the land of Archie, where the stakes are rarely life and death, but rather date or stag, the villains look quite different. Reggie, on the surface, is everything Archie isn’t: he’s handsomer, more confident, more full of himself, and less kind that Archie – or anyone in Archie’s circle, really – is. He’s the popular kid who’s also a dick, a variety that I’m sure all of us remember from high school.

But we’ve all seen enough TV and movies – not to mention, you know, lived enough life – to know that those kids are usually that way for a reason. For Reggie, it is chalked up to his parents not having enough time for him, a classic bratty kid excuse (says the guy who is typing this as his 9 month old son plays in his bouncer. And that cat’s in the cradle and the silver spoon…). He is also lovesick over Midge Klump (from what I can tell, no relation to the Nutty Professor’s family), a development that, I’m sure, adds to his animosity towards the world.

The first thing to note about this book is how nice it looks. Sandy Jarrell takes a similar approach as the Evan “Doc” Shaner or Scott Kowalchuk, where his style could have fit reasonably well in a 1960’s “Archie” story or today. There’s a classicism to Jarrell’s art that serves the Archie world perfectly, as it preserves the timelessness of the stories.

My favorite panel in the issue comes right after everyone ditches Reggie’s party for Veronica’s. Jarrell draws Reggie lying through his teeth to Midge and Moose, calling all the departed folks losers who he wanted gone. Jarrell draws it in such a way that you can practically see the pain behind his too-large grin. The subtlety in Jarrell’s work is what makes this book enjoyable, and why he was such a get for this title.

If not for his art, the book would be far more of a mess than it already is. DeFalco is a veteran writer, but this reads like a rookie book. Everything is spelled out, despite not needing to be in many cases, and Reggie doesn’t come off as particularly enjoyable. I don’t mean blandly likable either; I just mean a character that you’d enjoy reading month in and month out. The closest that he gets to an honorable trait is that he’s a dog lover, and that really isn’t enough to get me to care. And, trust me, I love dogs like our staff likes tweeting about video games, so if I’m not moved by canine affection, no one will be.

Dogs have an interesting role in the Archie world – for anyone who has read “Afterlife with Archie,” you are fully aware the power of a canine friendship can wield in these comics. However, having Reggie’s dog be the narrator of this book is an impossibly lazy decision (as is the name Vader – you know, like the perceived evil, but actually just used and misunderstood Star Wars character!). It gives the book a borderline omniscient narrator, but one that offers essentially the exact same perspective that Reggie would bring if he was the narrator. There are ways to make Vader an interesting narrator, but DeFalco does none of them. Instead, he’s just another lazy character in book littered with them.

For Reggie to be truly interesting, we need to see why he’s popular, or why his “pranks” (which seem like petty crimes more than goofs – you know, that only friendly ‘slash your tires’ prank!) endear him to folks, or why Midge is so great, or how Vader has changed his life, or anything resembling character development. Making Reggie simple “the misunderstood bad boy” isn’t enough to warrant his own book.

It’s a bad sign when the classic “Archie” story included in the issue offers far more of an observation about the character than the new story you just asked readers to shell out $4 to read. And I’m the target audience for this book! I’m an enthusiastic neophyte who comes with few expectations – if you can’t sell me on this book, then I’m not sure who, if anyone, you can.

Final Verdict: 5.7 – Unless something seriously changes in the next few issues, Reggie has pranked himself back into obscurity. The “Reggie” part of the title will remain, but I don’t see “me” coming back anytime soon.