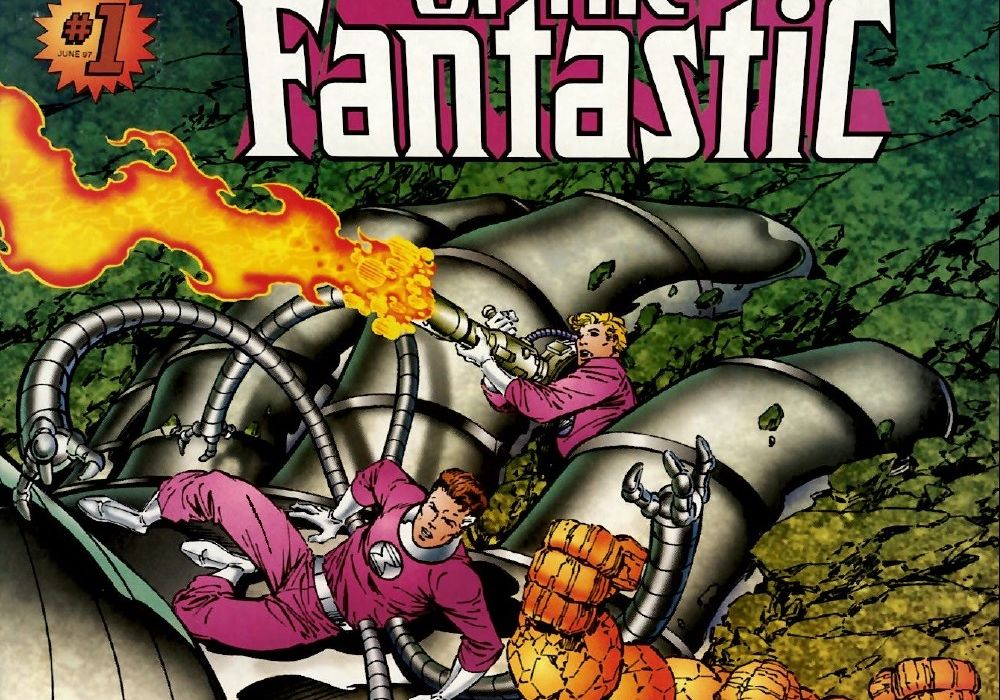 The retro review journey through Amalgam continues today with “Challengers of the Fantastic”, a team teased in 1996’s “Spider Boy” and featuring a kinda-sorta sub-plot crossover with 1997’s “Spider-Boy Team Up”. 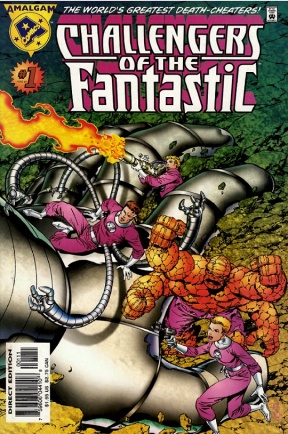 This issue was written by Karl Kesel, the same creator who introduced the team as supporting characters in the “Spider-Boy” issue a year earlier. He was aided by penciller Tom Grummett and inker Al Vey. This Amalgam was published by Marvel.

The plot
The story is told in four parts. The first part is a brief “re-telling” of the team’s origin. Essentially, it’s the Fantastic Four origin, except they don’t get superpowers. They just survive the cosmic rays and decide to continue challenging other fantastic situations. For some reason, they adopt an hourglass as their logo. 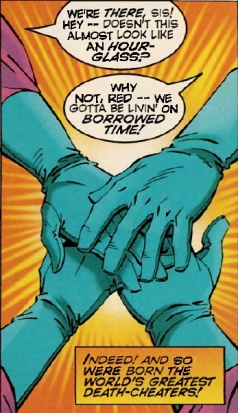 In Chapter 1, we catch up on where the team is in the present day. The only important change is that Johnny “Red” Storm has a miniature clone of himself that rides on his shoulder talking to him. (Note: this was done two years before Austin Powers made it popular with Mini Me in The Spy Who Shagged Me.) They group is visited by Uatu the Guardian (he got better), who warns them that Galacticiac is coming. On their way to stop Galactiac, they meet the Asgodian avatar of death, the Silver Racer (Silver Surfer + New God Black Racer), who is there because someone’s about to die.

In Chapter 2, Galactiac (Galactus + Braniac) is setting up his world eating machine, but he needs to shrink part of the planet to preserve first. While they talk to him a bit, Uatu transports Johnny elsewhere, because only he can save the day. Galactiac gets mad at the other Challengers and blasts Rocky Grimm, turning him into the four-armed Thing seen on the cover.

In Chapter 3, there’s a fight, Johnny does something in what looks like another dimension, but it’s not at all clear. Reed Richards borrows Doctor Octavious’ tentacles to fight the Thing. Stuff happens, there’s a flash of light, and Galactiac is beaten. His head ejects into space, promising revenge. Johnny returns to the group and reveals it was his tiny clone that saved the day, sacrificing himself in the process. Meanwhile, Doctor Doomsday (remember him?) captures the Silver Racer and steals his powers.

What “Wizard” thought then
In the “Spider-Boy” book, there was a subplot about the Reed slowly turning evil. In this book, there’s a line of dialogue that clarifies he’s been cured. “Wizard” calls this continuity clean up, and it’s later cited as an example of why fans weren’t as interested in Amalgam the second time around – not that the clean up was unappreciated, but as evidence the Amalgam experiment was disjointed and shortsighted when compared to something like DC’s Tangent Universe, where the series of one-shots built a richer tapestry because they shared a common foundation.

Moving on, how about the coloring job on that cover? Mid-90s computer coloring at it’s finest! The gradient on the hand makes it look 3D. The fire from the flamethrower has a crazy electrical effect. And the texture on that dirt… man! It was top of the line then, but it sure looks dated now.

The story itself is very paint-by-numbers. There are no big twists – it’s just a basic retelling of the Galactus Trilogy, down to the Silver Racer being talked into opposing Galactiac by June Masters, the Amalgam of Alicia Masters and… June from Challengers of the Unknown, I guess? The whole adventure Johnny goes on is only done because Stan and Jack did it first. Neither the location nor the purpose are ever made clear. Coming from the same writer who gave us the innovative “Spider-Boy Team-Up”, that’s a real disappointment.

Speaking of “Spider-Boy Team-Up”, I’m not sure I get the point of the crossover between the two. In “Team-Up”, the hero’s supporting cast see the Silver Racer arrive. In “Challengers of the Fantastic”, the team sees Spider-Boy’s supporting cast unconscious. Both books feature editorial notes pointing the reader to the other book for more details. I guess this is supposed to be similar to early Marvels?

Grummett’s art makes up for some of the book’s weaknesses. The action is easy to follow and his Amalgam designs are nice.

I can only assume he expected the sequence with Johnny doing stuff on his own would be explained better through captions. I hate to harp on that one sequence again and again because it was only four panels, but it was the deux ex machina and it just… happens. He shows up somewhere, hits a blue line with fire, then points his weapon at a “device”. He does, and there’s a blinding flash of light, and then it’s over.

In the end, this is an attempt at an homage to the original “Fantastic Four” stories that fails to add anything new. The only thing holding it up is the knowledge its readers bring to it in advance. If there was a second issue, I’d leave it on the stands.