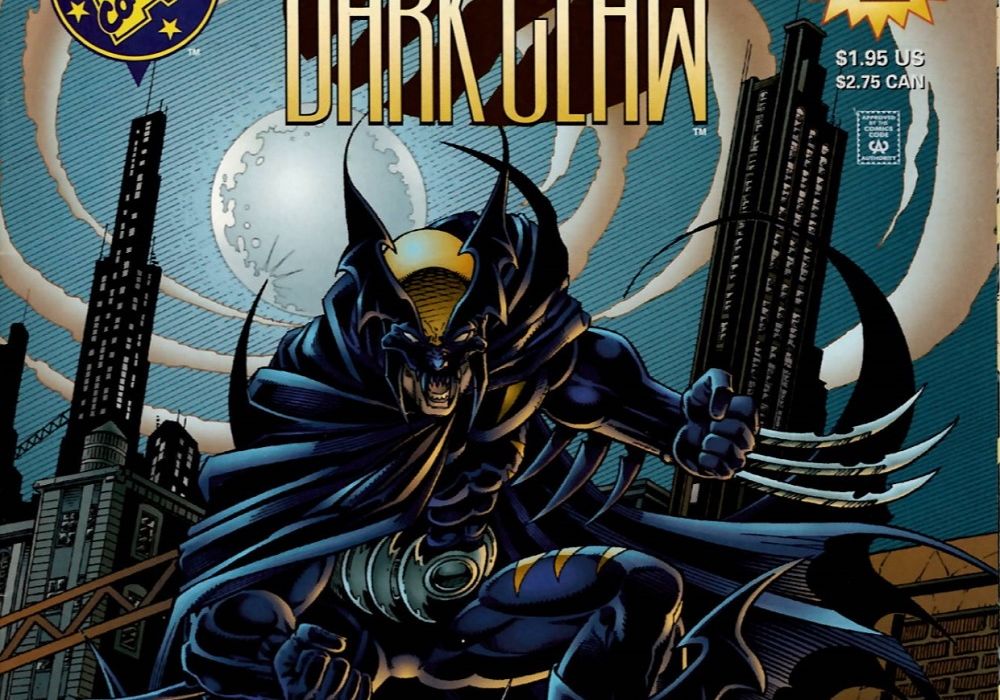 The summer journey through the Amalgam Universe continues today with a review of “Legend of the Dark Claw” by Larry Hama and Jim Balent. This is the one I was most excited about from the first wave, but it was a real let down. 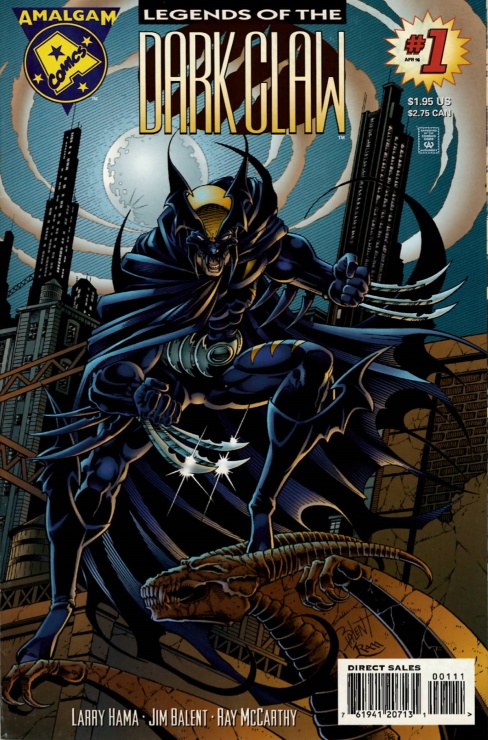 The Mashup
Batman and Wolverine combine into Dark Claw. Dark Claw’s secret identity is Logan, a “techno-wizard” and abstract painter. I’m not really sure what that was based on, but I’ve never read a Wolverine comic either. Does Wolverine paint?

Supporting characters include Sparrow (Robin + Jubilee), the Huntress (Huntress + Carol Danvers), and Hyena (Sabertooth + Joker, with some Riddler elements too). The book was brought to us by writer Larry Hama, penciller Jim Balent, inker Ray McCarthy, colorist Pat Garrahy, and letterer Bill Oakley. It was published by DC.

The Plot
The issue opens with Dark Claw already battling the Hyena at a newspaper printing press. Dark Claw was lured in by a clue, but Hyena won’t explain why he attacked the Gotham Gazzette. They fight for six pages until Dark Claw is rescued from the roof by Sparrow in a helicopter.

The scene cuts to Logan’s penthouse apartment, where Huntress is breaking in through a window. She walks through his art studio, up some stairs to the bedroom, and opens a closet. Inside the basic bi-fold door, with no kind of lock or security at all, all the spare Dark Claw costumes and masks are just sitting out on display. While Huntress is still in shock from this discovery, Dark Claw comes bursting through the back wall of the closet (Huntress helpfully explains to us “A secret passage and elevator behind the closet wall! So that’s how you get in and out–”).

They fight a little bit, but Dark Claw gives up and ponders “What do I do with you?” Huntress, who was after Hyena and doesn’t seem to care at all about Logan or Dark Claw, asks about Hyena’s history. Dark Claw proceeds to reveal their shared origin: Logan and Hyena were in the Canadian Air Force together, were in a experiment that involved giant tubes filled with reddish liquid, and were both turned into killing machines. However, Logan’s parents were shot in front of him when he was five, so he had a conscience and became a hero instead of a monster.

Dark Claw takes her to his lair, where Sparrow gets mad about Huntress knowing about them, and I think she asks Dark Claw to kill her. He doesn’t. Instead, Sparrow reveals that Hyena changed the headline for the next day’s newspaper while at the printing press. It’s another riddle, but our hero solves it in one panel: Hyena is going to kill the president on Air Force One.

The trio hop back in the Claw-Copter (so named in the text) and Dark Claw forcibly boards Air Force One while it’s in the air. Hyena comes out of hiding and tries to gas Bill Clinton, but Dark Claw uses his adamantium claws to tear a hole in the plane. The decompression pulls out most of the poison along with Hyena and Dark Claw. Hyena escapes with a parachute, and Dark Claw falls safely into the Claw-Copter. The fight isn’t over, but it will have to wait until next issue.

What “Wizard” thought then
The combo was a “no brainer” and it was “just as cool as everybody hoped it would be.” (#58, p115) In fact, “Wizard” liked it so much they commissioned a cover featuring the character. They thought Larry Hama used the best elements from each character and picked a great supporting cast. The book never cracked the Hot Top Ten, but it appeared in the the 11-20 list longer than any other Amalgam. 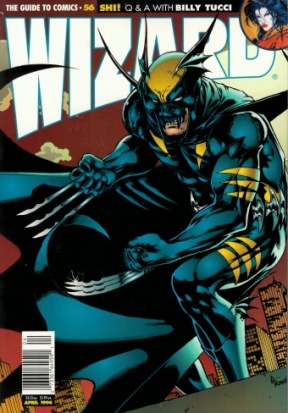 Despite being the highest ordered Amalgam, it was the first one to sell out, and “Wizard” advised readers to buy one immediately while it was still affordable. From a cover price of $1.95, “Wizard” showed the price climbing to $4 within a few months, and hitting $5 before the second Amalgam wave hit a year later. I got my copy earlier this year for $1.70.

What I think now
Continued below

I was disappointed by this book, but my expectations were high for several reasons. First, back in the late 1990s a friend of mine told me how awesome it was, and I never forgot his excitement about it. Second, “Wizard” convinced me it should be the best of the set. Third, I trust Larry Hama from his GI JOE days. Fourth, I only know Jim Balent by reputation, but that reputation is great. Finally, it’s Batman and Wolverine. How can you screw that up?

Well, the tone of the series struck me wrong from the first word balloon. Let me quote the opening passage of the comic: “’Black and white and red all over’ – It doesn’t take a detective to figure out where your clue was pointing to, Hyena… but how does the Gotham Gazzette printing plant fit into your nefarious scheme?” As I said earlier, I don’t think I’ve ever read an issue of “Wolverine” – my concept of him is formed by the 1990s animated cartoon and Hugh Jackman. Neither of them would talk like this. Batman hasn’t spoken like that since 1968.

The dialogue quality doesn’t improve, either. Hyena’s response to the above question is “That’s for me to know, and you to find out.” You know who says that? My sister, when she was 12 and trying to irritate me. If you take this childish banter out of “Legend of the Dark Claw”, there won’t be many words left.

The plot comes down to three scenes, and there’s very little connection between them. First there’s the fight at the printing press. Then Dark Claw explains his origin to Carol Danvers/Huntress, then they rush off to save President Clinton. No motive for Hyena’s action is ever given beyond him being a bad guy. A Canadian bad guy. Surely there’s a reason he’d go after the American president instead of his own prime minister, right?

The characters are pretty flimsy, too. The only glimpse we get of the man behind the Dark Claw mask is in picture frames in the background. Why is he a hero? The only answer Hama gives is that Logan has a conscience – which is not really an answer. I have a conscience, but I don’t dress up and fight crime. Neither do my friends, as far as I know.

Huntress is a bizarre addition. I guess Carol Danvers was sort of associated with the X-Men while she was flying around space as Binary, but was there really no one else to use? Like Jean Grey, maybe? Huntress contributes nothing, existing solely so Dark Claw can explain his past. After he relates his flashback, she tags along but does nothing useful. Sparrow is an interesting concept, but she’s here mainly to fly the plane and call Huntress a slut for no clear reason. 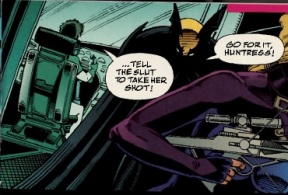 On the art side… I don’t understand why Jim Balent was regarded so highly. I know he drew attention for putting big boobs on Catwoman, but I thought there would be more to his work than that. Maybe this isn’t a good example of his work.

Throughout the issue, something about his art was bugging me, but I couldn’t put my finger on it. Layouts were clear. Characters were easily distinguishable. He did an acceptable job of establishing the scene before doing extreme close ups. It didn’t hit me until I looked closer at the cover. Scroll back up and look at Dark Claw’s feet. He’s standing on his toes.

Why would he stand on his toes? He doesn’t appear to be leaping. He’s holding that menacing pose. So why are both ankles so high off the ground?

With this in mind, I took another look through the comic. Check it: 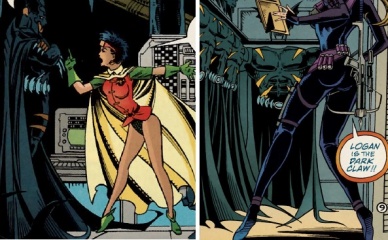 They’re all standing on their toes! Any time Balent drew a foot here, it was pointed straight out. Sometimes it was fine – a person was running or falling or whatever. But no one stood flat footed. Ever.

Realizing that, I finally understood what was off with Balent’s art – his choreography. In the fight scenes, and even some of the conversational scenes, the spacial relationship between characters is inconsistent from one part of a panel to another. They’re out of proportion, or their pose is unnatural or impossible.

I suppose that was the popular style at the time, a hold over from Todd McFarlane’s contorted Spider-Man art, but it renders some of the action hard to follow. In a three panel sequence, Dark Claw and Hyena are fired upon from below, a panel shows Hyena’s goons clearly aiming upward at them, but then the third panel pulls back to show everyone in one shot and suddenly the goons are above the hero, firing down.

Maybe my expectations were too high for this book. If I’m being honest, I probably would have thought it was awesome when I was eleven. On that level, it was a success because that was still the target audience for superhero comics in 1996. Still, it’s filled with too many technical flaws for me to enjoy it today. If there was a second issue, I would skip it without a second thought.