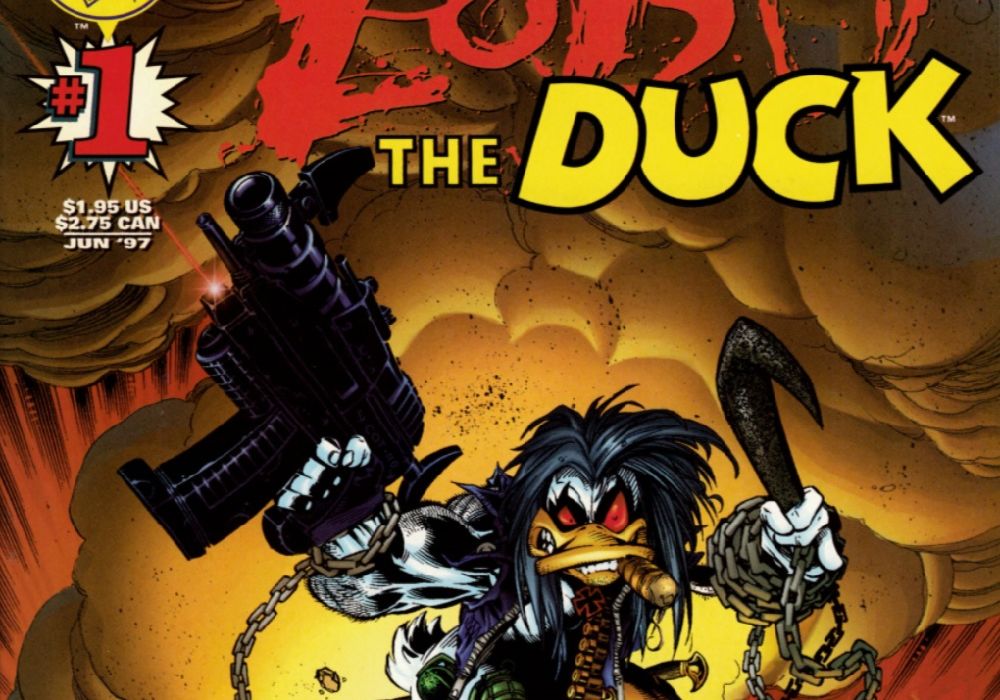 Let’s be honest, if the title doesn’t grab you, there’s nothing else I can say to make you read the next review in our journey through Amalgam Comics. 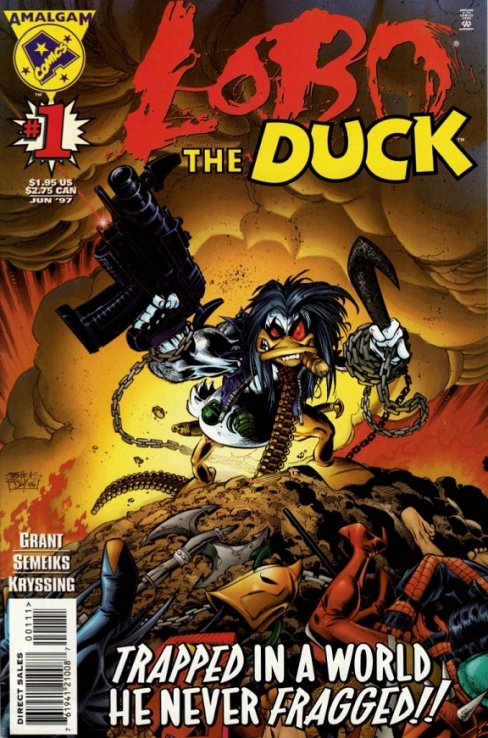 The Mash Up
Lobo, DC’s hyper-violent anti-hero who was already past his peak popularity, meets Howard the Duck, Marvel’s cult favorite fish out of water who hadn’t headlined a series since 1981 but still made occasional guest appearances.

Like “Generation Hex” before it, this is another odd-ball pairing from DC. “Lobo the Duck” was written by Al Grant with pencils by Val Semeiks and inks by Ray Kryssing.

The plot
Lobo wakes up in the middle of Manhattan, which has been reduced to rubble. Other Amalgam heroes like Doctor Strangefate, Dark Claw, and Spider-Boy are shown to have died. Lobo goes to a bar, where he fights Ambush the Lunatik, another mercenary who’s after the villain that destroyed Manhattan. Lobo eats Ambush, then spends some time with Ambush’s two girl friends. He’s discovered by his girlfriend Bevarlene, who gets mad and kicks him out of the bar. 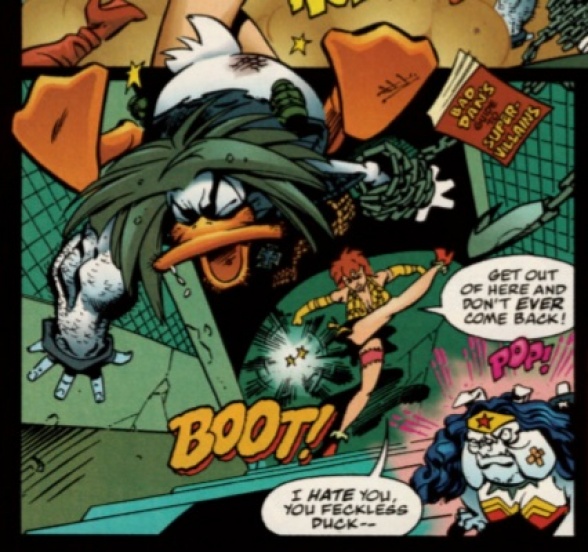 He finds himself confronted by Jonas Turnip and two more scantily clad women. Turnip gets into a fight with his brother who appears out of nowhere, so Lobo heads off with the two women, only to be found by Bevarlene again, and beaten up by her again.

Shortly thereafter, he realizes who the villain is (the Gold Kidney Lady) and goes after her. There’s some mumbo jumbo about her trying to cleanse Earth like kidneys cleanse the body, and a big fight between Lobo and her henchmen. She’s about to push a lever that will cause the moon to crash into Earth, so Lobo shoots her… and she falls on the lever. Now the moon’s coming toward Earth, and the story is to be continued.

I left out some subplots with other villains that didn’t matter.

What “Wizard” thought then
The promo piece in issue 69 was just some fluff from Grant about the plot and how excited he was. The Market Watch column in issue 71 had nothing to say about it either way, other than it being the worst selling Amalgam and the only one not to appear in the top twenty sellers for the month of release. The book never went above cover price in the price guide and wasn’t listed after its one year anniversary.

It might be worth noting, though, that “Lobo the Duck” is the only Amalgam comic I had to pay over cover price to buy in late 2019 – it was selling for triple ($6).

What I think now
“Lobo the Duck” was aimed at a different audience than any other Amalgam I’ve reviewed so far, and the most obvious way to see that is in the ads. Other wave two Amalgams from DC all had the same ads for Coca-Cola, Batman toys from Kenner, Tang, and the PG movie Warriors of Virtue. “Lobo” has none of those, instead running spots for VH1, the new Aerosmith album on CD and cassette, and the R rated movie The Glimmer Man on Pay Per View. (Pay Per View, for all my young readers out there, is the ancestor of streaming.)

Grant’s story is well paced, if a bit aimless at times. Lobo bounces from scene to scene, in theory because he was hired to find the villain who destroyed Manhattan. Along the way he encounters (or a subplot shows us) other villains who have nothing to do with that, like the goons of Doctor Bongface.

When we get to the end, it’s still unclear if the Gold Kidney Lady is that villain. I’m inclined to say “no” based on her motives and capabilities, but I guess it doesn’t really matter. This was supposed to be comedy, not “Moby Dick”.

To that end, Semeiks was a great fit for this script. I’m unfamiliar with his work outside of this issue, but his animated style is perfect for the adventures of an angry duck. He incorporates a variety of panel shots, using some distant ones to set the scene, silhouettes to focus our attention on the key elements, and close ups for extreme emotion. There’s a lot of storytelling skill on display here.

If I’m being honest, though, the book didn’t really do it for me. Not because of any technical flaw or nonsense from the plot, but because this just isn’t the kind of story I enjoy. The humor falls almost exclusively into the so-bad-it’s-good vein where they’re constantly winking at the reader to say “Isn’t this just silly?”

If there was another issue, or if any of the fake back issues they reference existed, I wouldn’t buy them. However, I do have some friends I would recommend them to.